In an excerpt from our new Tech Buyer's Guide, learn everything you need to know to pick up the perfect netbook this holiday season 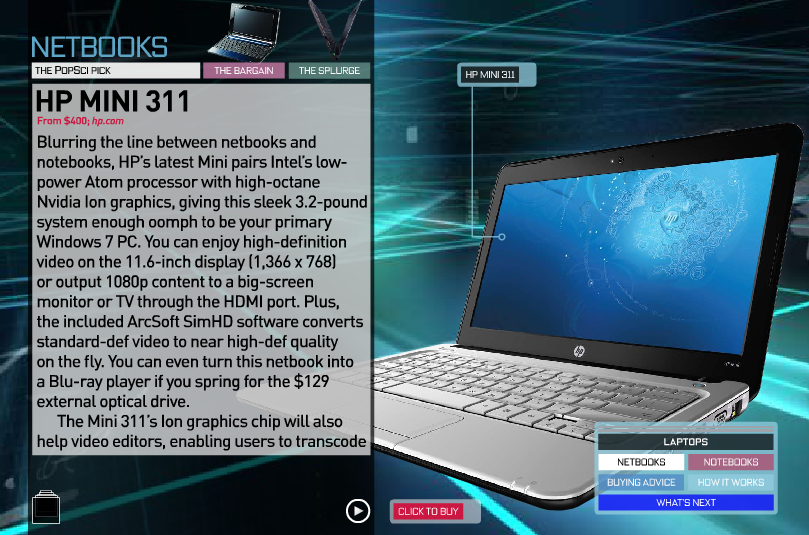 Each day this week leading up to Black Friday, we’ll excerpt a chunk of our new Tech Buyer’s Guide here on the site to arm you with the skills and the picks to get the most from your weekend shopping madness. Here are our picks and our buying advice for netbooks. Check out the guide for our picks in full-size laptops, as well as in 15 other product categories. 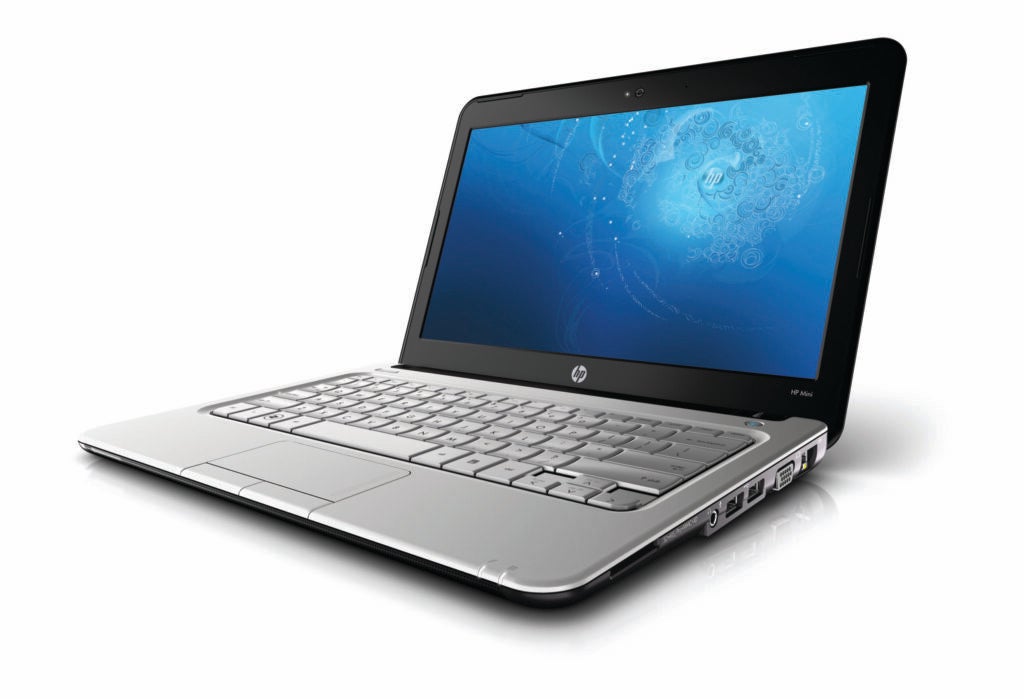 Blurring the line between netbooks and notebooks, HP’s latest Mini pairs Intel’s low-power Atom processor with high-octane Nvidia Ion graphics, giving this sleek 3.2-pound system enough oomph to be your primary Windows 7 PC. You can enjoy high-definition video on the 11.6-inch display (1,366 x 768) or output 1080p content to a big-screen monitor or TV through the HDMI port. Plus, the included ArcSoft SimHD software converts standard-def video to near high-def quality on the fly. You can even turn this netbook into a Blu-ray player if you spring for the $129 external optical drive.

The Mini 311’s Ion graphics chip will also help video editors, enabling users to transcode clips about five times as fast as on netbooks without Ion inside. And although demanding 3-D games like Far Cry 2 will be too choppy to play, Ion can easily handle more mainstream titles like Spore. The only tradeoff is that you get about half an hour less battery life than netbooks without Ion.

Other welcome features include a keyboard that’s 92 percent of full size, a roomy touchpad, an integrated webcam, three USB ports and a 5-in-1 memory-card reader. And unlike most netbooks, the Mini 311 boasts Altec Lansing speakers, which deliver loud and clear sound. Take your pick from a black swirl pattern or, for an extra $20, a white swirl. 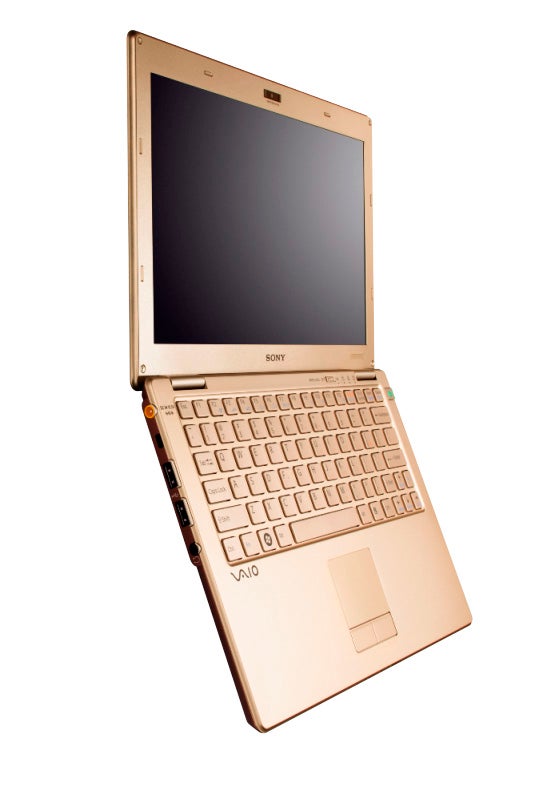 $1,300; Sonystyle.com
Measuring a mere 0.55 inch thick and weighing 1.6 pounds, the VAIO X Series makes the MacBook Air (0.76 inch, 3 pounds) look bloated. Sony accomplished this feat by wrapping the body in an ultralight carbon-fiber shell. And the LED-backlit 11-inch display (1,366 x 768) is as easy on the eyes as the aluminum milled keyboard. The system sports a relatively fast 2.0-gigahertz Intel Atom processor, two gigabytes of RAM (plenty to run Windows 7 Premium) and a 128-gigabyte solid-state drive that runs circles around standard hard disks. Sony covers all the connectivity bases by packing the VAIO X with 802.11n Wi-Fi, GPS and Verizon Wireless 3G broadband (for an additional $60 per month).

The Bargain: Acer Aspire One D250

From $300; Amazon.com
Available in red, white, blue or black, this 2.4-pound netbook fulfills the netbook promise: It handles basic tasks like Web surfing perfectly well, and it’s cheap. It features a 10-inch display (1,024 x 600 pixels) and all the usual netbook specs, including a 1.6-gigahertz Atom processor, one gigabyte of RAM and a 160-gigabyte hard drive. You also get a built-in webcam and memory-card reader. The included three-cell battery lasts about three hours on a charge, but you can double that endurance if you spend $50 more for the six-cell model. That version now includes an option to boot nearly instantly into Google’s Android OS, so you can start surfing without waiting for Windows XP to load. 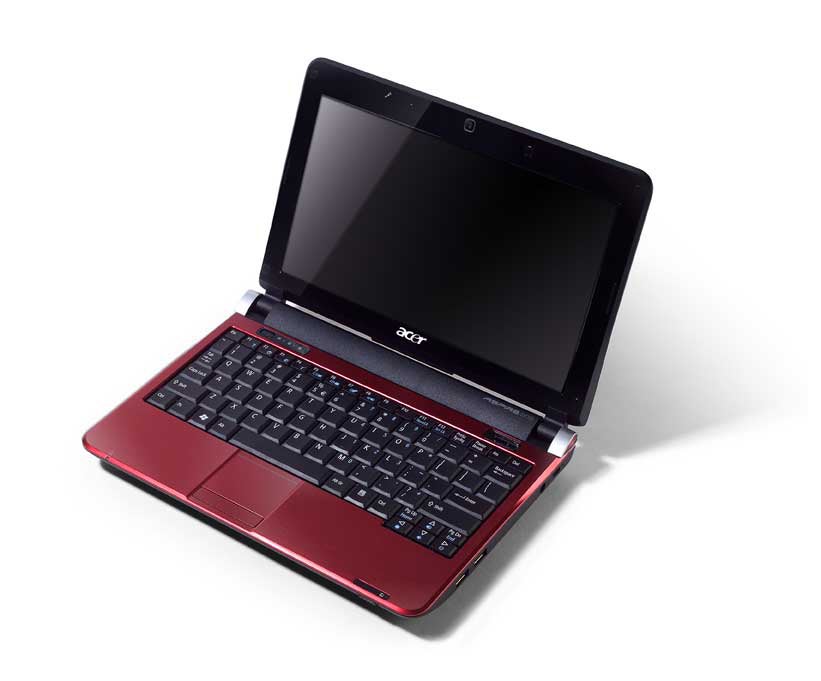 • PROCESSOR: You’ll find Intel’s 1.66- gigahertz Atom N280 processor in nearly every netbook, which is fine for surfing the Web, word processing and even streaming video (although you’ll likely see jerkiness at full screen).

• RAM: Windows XP (or Linux) users can still get by with just one gigabyte. If you’re stepping up to Windows 7, you’ll want at least two.

• HARD DRIVE: Since it’s typically meant to be a second machine, the netbook standard of 160 gigabytes is fine, but if you plan to carry a lot of data, you can sometimes upgrade to 250 gigabytes for very little extra money.

• GRAPHICS: It used to be that you had to suffer with Intel’s integrated graphics, but now ASUS, HP, Lenovo and Samsung all have models with Nvidia’s Ion chip, offering full high-def video playback, zippier video editing and better gameplay. Expect to pay at least a $50 premium.

• HDMI comes in handy when you want to output video and audio through a single cable to a bigger monitor or HDTV. It’s great for catching up on your favorite TV shows on Hulu or other sites at full screen. DisplayPort is also gaining in popularity, but the LCDs that support this connector tend to be more expensive.

• eSATA ports often double as a USB ports but carry data six times as fast as USB, allowing for lightning-fast backups to external eSATA-equipped hard drives.
A backlit keyboard seems like a minor detail, but notebooks like the MacBook Pro and Dell XPS 16 are a lot easier to type on when you’re in a coffee shop, an airplane or even on the sofa watching TV at night.

• A multitouch touchpad lets you do things like rotate photos and scroll Web pages with two fingers, and you’ll want a touchpad that supports multitouch gestures. We recommend that you try the notebook out before you buy, however, because some touchpads can be finicky.

• Blu-ray drives are often an option for about $150 more than your standard DVD burner. But given that you can download or stream high-def content from an increasing number of sources, it’s rarely worth it.

• Mobile broadband is available on USB 3G modems for free on contract, so there’s no need to spend $125 or more to have it built into your notebook. Plus, you can use that modem across multiple PCs.

•Windows 7 Ultimate offers some unique features over vanilla Windows 7, like the ability to run in XP mode and the ability to back up to a home or business network, but the Home Premium Edition has everything most consumers need.