iPhones for the Blind

Quick, get out your iPhone. Unlock it and slide over to that game you’ve been playing when your boss isn’t...

Quick, get out your iPhone. Unlock it and slide over to that game you’ve been playing when your boss isn’t looking. Now mute it, put the phone to sleep, close your eyes, and try to do that again. Can you do it? Didn’t think so.

There’s not a simple way to use touchscreens when you can’t see what you’re doing, which means 10 million blind and low-vision Americans can’t use this ubiquitous technology. But what if you could feel it? What if the “slide to unlock” key was an actual slide? Even better, what if you could have a Braille iPhone?

Led by a scientist at NASA’s Jet Propulsion Laboratory, an international group of researchers is hoping the same technology that could provide amputees an artificial arm could help blind people access the wireless world.

Using electroactive polymers, which are also used to create robotic arms or hands, Braille users could theoretically have Kindles with raised dots — a fitting way to celebrate Louis Braille’s 200th birthday this year.

A hypothetical Braille iPod would involve a field of actuators overlaid by an electroactive polymer, or EAP, a film that contracts when exposed to a voltage. Braille reading pins would be mounted on the film, and the pins would be raised or lowered by applying a jolt of electricity. Ideally, the device would be big enough for an entire page of Braille text, about 11 inches by 12 inches. 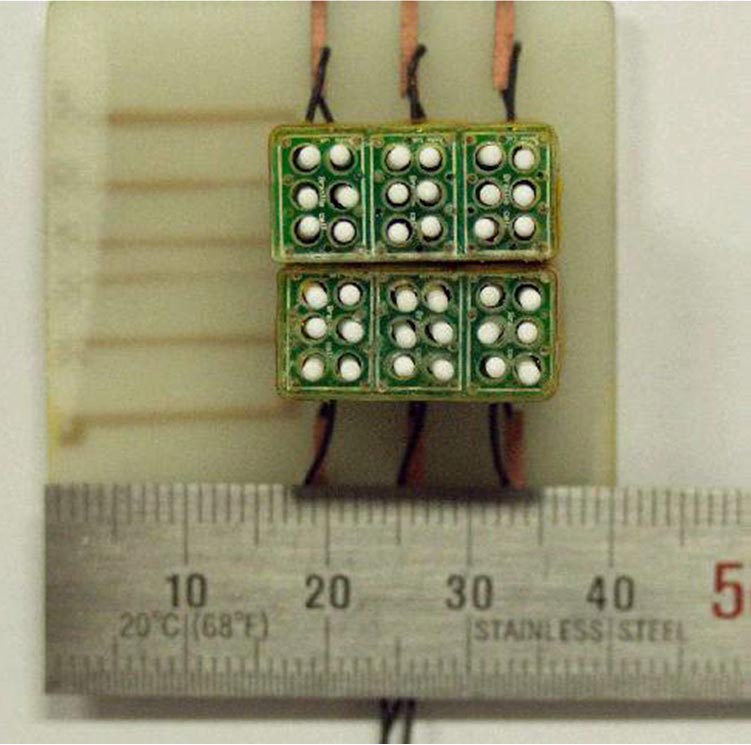 “All it is, is packing actuators into a small area,” said Yosi Bar-Cohen, a researcher at JPL in Pasadena, Calif. “The requirements we are trying to shoot for, for the blind, have certain specifications, but I don’t want to limit it to that. The blind will be benefited if we can find a bigger market with a solution that is close to their requirements — then you’re talking about billions of people.”

He came up with the idea after staying at a hotel that hosted a conference for blind people, where he watched groups of people navigate with white canes and order food from a Braille menu.

“I thought, oh my gosh, we are taking computers and the Internet and all of those things for granted, and these guys don’t have that,” he said. A planetary scientist with a degree in ultrasonics, Bar-Cohen had worked a bit with EAP, and tinkered with a basic design for a Braille reader, which he later submitted for a patent.

He is planning a conference for next spring and hopes to share designs that have been developed in the past 10 years in Australia, Germany, Japan, Korea and the U.S.

Technology has helped blind people communicate in ways Louis Braille could have only dreamed — futurist Ray Kurzweil’s desktop and mobile-sized Kurzweil Reading Machines, for instance, scan text and read it aloud. But technological advances have been a double-edged sword, says Brian A. MacDonald, president of the Boston-based National Braille Press and cofounder of its Center for Braille Innovation.

“Everyone thought, starting in the ’80s, that personal computers and talking devices would replace the need for Braille and it would be like Latin, a dead language,” MacDonald said.

But it didn’t happen. For one thing, it’s not easy to learn concepts like math and science by listening to a droning computer voice; students still need some sort of tactile interaction. Not everyone wants to passively listen, but Braille is the only way for blind people to read. Several types of electronic Braille devices are available, but they’re often prohibitively expensive — desktop devices range from $6,000 to $10,000 per unit, and portable devices, which are limited to one line of text at a time, can cost $3,500. The result has been a staggering drop in Braille literacy — today, about 10 percent of blind people can read Braille, about one-fifth the amount that could read it 40 years ago.

MacDonald imagines an affordable, portable and reliable full-page reading device that would let blind and low-vision people go wireless and also spur a new generation of Braille users. He calls it the “Holy Braille.”

Sighted people could use the technology, too, for everything from surgical instruments to steering wheels. MacDonald described a steering wheel with an EAP skin that could sense grip strength, heartbeat and other vitals, and react to groggy or distracted drivers.

“These are all things that would help the sighted world as well,” MacDonald said.

It wouldn’t be the first time — the 1970s-era Kurzweil Reading Machine was intended for blind people, but it required the invention of an optical scanner, which are now as common as office water coolers.

Mel Siegel, who directs the Intelligent Sensors, Measurement, and Control Lab at Carnegie Mellon University’s Robotics Institute, said everyone could benefit from a more touchy-feely world. Researchers at CMU are tinkering with hydraulics, pneumatic devices and latex buttons to give dimension to modern touchscreens.

“(With touchscreens) you don’t have the feedback to your sensory system, and I think that would be a very useful thing,” he said.

Siegel noted that some early personal computers had membrane keyboards, but they eventually disappeared from everything but microwave ovens. Almost all keyboards still have keys that click and press down as you type.

“You don’t need all that motion except that people really like that feel,” he said. “It says, ‘You’ve really succeeded in interacting with this piece of electronic machinery in the world.’ And I think we will want that for a long time.”