Show and Sell: The Secret to Apple’s Magic

Flash an exotic prototype, then—Presto!—get people to buy your more boring stuff. That kind of thinking still rules at most... 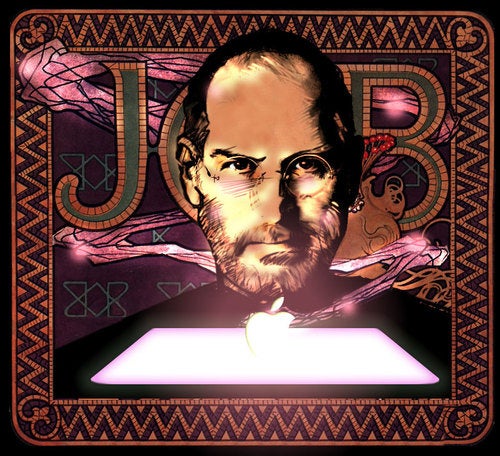 Flash an exotic prototype, then—Presto!—get people to buy your more boring stuff. That kind of thinking still rules at most electronics companies. Apple under Steve Jobs only shows off actual products. The difference? Apple’s arcane secret to success.

“Here is your possible future,” they bark, flourishing the latest conceptual product from the lab. “Now watch us make it disappear!”

If this sounds like a minor complaint about most of the industry’s lack of imagination in marketing, you’re misunderstanding the whole act. The fact that Apple does not reveal prototypes but shipping products is the fundamental difference between their entire business strategy and that of the rest of the industry. It evokes a feeling of trust between Apple and consumers—that when Apple actually reveals a product, it’s something that they’re confident enough to support for years to come.

For the better part of the last century—starting arbitrarily with the 1934 Chicago World’s Fair and its stark, Randian slogan: “Science Finds, Industry Applies, Man Conforms”—the producers of consumer goods have stuck to a basic formula: Show off a prototype; gauge public response; then release a commercial product that is less ambitious, if released at all.

It worked in part because it told a compelling story. “Here is what the future looks like; and here’s an intermediate step towards that future that you can buy today.” Electronics’ sister industries followed the same tack. Car shows were populated with prismatic concept cars hewn with non-Euclidean angles rotating on raised daises. Videogame tech demos showed graphics too impossible to believe, but entrancing enough to betray our better judgment.

But in Jobs’ encore performance, Apple has changed the routine.

Outwardly Apple’s showmanship is competent, workmanlike. Jobs-as-performer wears an understated uniform that does not distract from the act. His humor, when it exists, is subtle. The closest an Apple keynote gets to pomp are pie charts that look like wooden logs.

Yet when Jobs reveals the company’s next product, there’s a critical difference: It exists. When possible, it is available for retail purchase the same day. There are few maybes or eventuallys tempering the presentation: “Here is the tiny miracle we’ve created. We want to sell it to you today.”

As a counter-example, let me pick on Lenovo for a moment: At CES this year, they showed off the Ideapad U1 prototype, a netbook with a screen that could be decoupled from the keyboard to operate as a multitouch tablet. Clever idea, seemingly well considered and brain-bendingly not available for purchase today.

Do you see the story that Lenovo is spoiling for themselves? First, they’ve deprecated the imagined utility of every other laptop they sell without the flashy removable tablet screen. Yet they’ve also whispered a nervous apology to potential customers: “We could make something this cool, but we’re not so confident in our plans to fully commit to them. Maybe you could tell us if you think you’d like this trick?”

Lenovo might make the U1. They might sell a few units. But simply by revealing it before it was a living, breathing SKU on retail shelves, they’ve relegated it to a quirky sideshow.

See also: The Chevy Volt, announced so long ago that GM has gone through a bankruptcy and shotgun CEO transition without actually being available for sale. Bet those will be flying off the lots.

Some of Apple’s peers understand the need to manage expectations. Have you ever seen RIM show off a BlackBerry prototype? What about Nintendo? They don’t pull a Microsoft-like move of showing very early-stage products to reporters and potential customers. They simply pull out a Wii or a DS and say, “This is it. Give it a try.”

Everybody loves a prototype. Engineers get a chance to strut their stuff. If you’ve got a 40-inch OLED TV in a lab somewhere, bring it to your trade show. Executives take pride in their company’s technical prowess. Marketers get an excuse to throw an even fancier party. And customers and press get idyll fodder for a daydream.

That an industry exists around rumors and leaks for unreleased products may be useful to Apple, but it is a side-effect of their product strategy, not the basis of their marketing. Consider that when Apple finally does release a product, the marketing tends to showcase the device itself in clear, comprehensible ways. Apple isn’t shy to make claims about the grandiose, epiphanal nature of its products because—whether they pull it off or not—they have built a culture in which every product they make is designed to be world class.

Instead of prototypes, Apple makes patents. Although I’m certain Apple would keep these patents behind the curtain if they legally could, their existence proves something amazingly pedestrian: Behind the scenes, Apple is essentially the same sort of company as every other electronics star in the world.

But like the consummate showmen they are, they temper the wooly process of building the future with something missing from nearly every other technology company: restraint. Apple may come off at times as a bit soulless, but at least they’ve got class. And when that class allows them to sell more products that make happier customers, I’ll take class over flash every time.

That the Consumer Electronics Show is held in Vegas is no accident. It’s a derelict spectacle meant to cater to mid-level buyers, gilt with the threadbare trappings of Innovation and Progress, but sending most of its audience home with nothing but a hangover and a t-shirt.

When Apple pulls a tablet out of its hat next week, it’s likely that we won’t be able to purchase it for a couple of months, but rest assured that’s only because of regulatory pitfalls. And besides, there will be no doubt that when Jobs shows us his vision of the future, Apple will be doing everything they can do to get them into our hands.

That’s the trick of it. Consumer audiences have grown wary of nearly a century of predictable sleight-of-hand. We’ve seen too many companies promise us the future, then fail to deliver it.

I believe that there are dozens of companies out there with the talent to pull the future toward us along some retail tesseract. But until they conquer their stage fright, leave aside the vaudevillian antics that savvy, jaded audiences no longer find compelling, and embrace a more honest and practical sort of conjuration, Apple will continue to be the defining technology performance of our age.