It can get to 60 miles per hour in under three seconds. 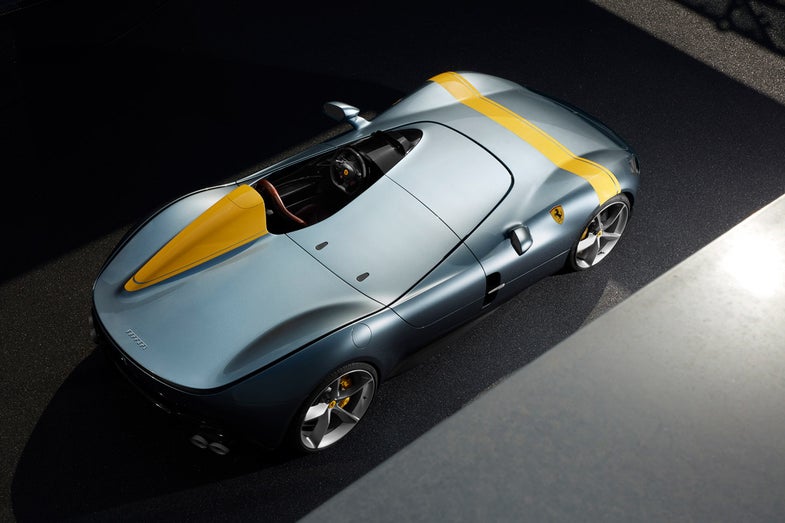 This week Ferrari announced a new series of cars called “Icona” — vehicles that are inspired by “the most evocative Ferraris of the 1950s” but equipped with the most advanced tech the company can fit to a car. They’re gorgeous, ultra-exclusive, and the only way most of us will drive it is with a controller in Forza or Gran Turismo. But it’s ok to dream.

The Icona vehicles will join Ferrari’s existing lineup of exclusive, limited-edition, incredibly expensive cars. With names like F40, F50, Enzo, and LaFerrari, these cars — really, more engineering works of art — sell out instantly. And, unlike basically every other car in the world, they go up in value when they drive off the lot. Then there’s the more “standard” vehicles like the 488 GTB, the GTC4Lusso, and the Portofino. They aren’t exactly entry-level, but they’re much more attainable than the specialty cars we’re talking about.

The new Icona collection starts with the Ferrari Monza SP1 and SP2, honoring Ferrari’s “racing barchettas” of the mid-twentieth century. Barchetta is Italian for “little boat” and was used to describe lightweight, open-top race cars. And the SP1 and SP2 certainly fit the bill.

Weighing in just north of 3,300 lbs dry weight (the ultra-exotic LaFerrari is more like 2,800 pounds, so they aren’t necessarily going for pure speed here), according to Ferrari, with 808 horsepower from a 6.5 liter V12 (the most powerful engine it has ever built), the cars can go from 0 to 62 mph in 2.9 seconds and from 0 to 124 mph in 7.9 seconds. So they’re fast in a straight line and, with Ferrari’s sports car heritage, it’s safe to say they’ll be fast around a track as well. The original barchettas raced on street tracks like Le Mans, focusing on both speed and handling.

But forget all that. The piece de resistance of these cars is the design.

There’s no roof. There’s no windshield. The driver is exposed to the elements, with a mix of classic and modern design that makes this car more about emotion than about pure technology. It’s not covered in function-over-form winglets and aero elements approaching absurdity like the FXX K.

Instead, its all-carbon fiber body sports flowing lines and looks like something legendary racing driver Juan Manuel Fangio would have driven. There’s a new “Virtual Wind Shield” — a bit of bodywork ahead of the driver and passenger that definitely wasn’t on the original barchettas — that helps push air around the passenger area of the car, making for a smoother ride and improving aerodynamics. The SP1 sports a single seat for the driver and that’s it. It’s as pure a racer as one can get, with nothing unnecessary on the car. The SP2 adds a second virtual wind shield, rollbar, and seat, allowing the driver to bring a friend along for the ride.

Ferrari has long been about passion and sentiment as much as it has about fast lap times and raw horsepower. The company’s prancing horse logo represents decades of history, and Ferrari’s constant homages to the past — reusing specific design elements or vehicle names — is key to both the brand and its customers. This car, more than any we’ve seen from Ferrari in recent memory, is a way to tie the past and future together.

Ferrari worked with fashion brands to create “gentlemen driver-inspired” outfit for buyers. A gentleman driver is someone who pays his way onto a race team, either with his own money or by bringing sponsorship, rather than being paid for his talents. For SP1 and SP2 buyers, this includes a racing suit, helmet, gloves, scarf (!), and driving shoes. We can always count on the Italians to be fashion conscious.

Pricing wasn’t disclosed, nor how many will be built, nor when it will be available, but the company says the Monza SP1 and SP2 are aimed at “dedicated clients and collectors.” I suspect it’s safe to say that if you have to ask, you won’t be invited to purchase one.

But at least we can admire them from afar.