The White Lightning’s engineers say the acceleration of its motors will outperform that of traditional combustion engines. 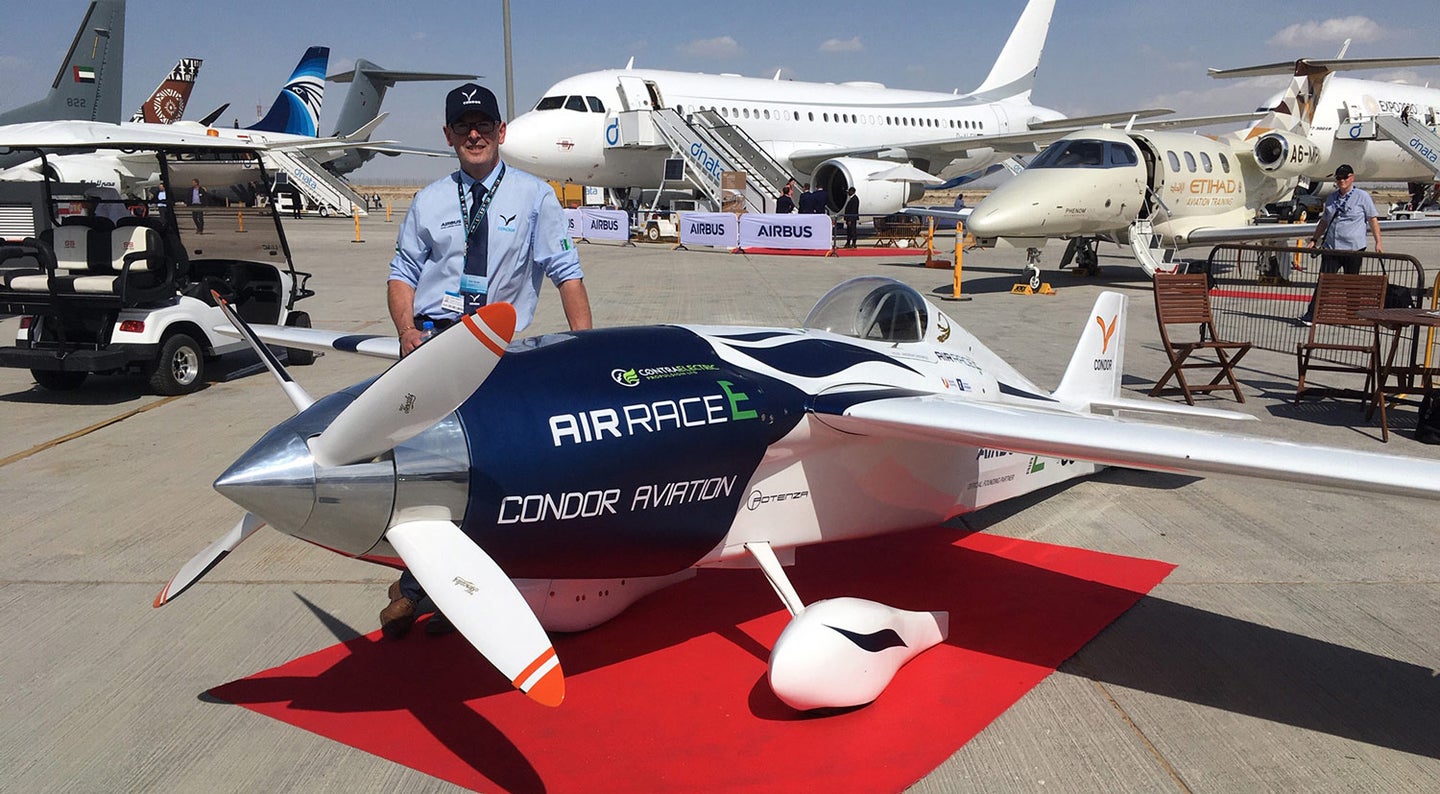 As race teams ramp up design and innovation ahead of the inaugural Air Race E all-electric air race series to debut in 2020, Condor Aviation of North Yorkshire, England, unveiled their “White Lightning” race plane, the world’s first air racing airplane powered solely by electricity. The announcement came as the team displayed their entry at the 2019 Dubai Airshow in the United Arab Emirates.

The Air Race E series is headed by international air racing promoter Jeff Zaltman and will present a series of head-to-head international air races, showcasing not only the skills of the pilots, but also the “expertise and ingenuity” of aerospace engineers from around the world. Unlike similar racing events that operate on a time trial basis, Air Race E events will see eight planes fly simultaneously around a tight five-kilometer circuit at just 10 meters above the ground at speeds of up to 279 miles per hour, say the organizers.

“This is a pivotal moment not only for Air Race E, but for the aviation industry as a whole,” Zaltman said during the unveiling. “Our aim by establishing an electric racing series is to develop a unifying platform for the development of cleaner, faster and more technologically advanced electric aircraft. The racing series will provide a testbed for innovation and accelerate the journey towards electric commercial travel. We’ve now shown it is possible to create history when planes like the one on display at the Dubai Airshow take to the skies for the race next year.”

Condor Aviation’s entry into the Air Race E series is a heavily-modified Cassutt race plane, with a powertrain configured to produce 150kW of continuous power. Condor has had to overcome numerous engineering challenges, such as adjusting the center of gravity for the change in motors and increased weight from the batteries, which will produce power for five minutes of high-intensity racing and around 10 minutes of reserve flying at reduced power. The Cassutt racer used was once a regular on the Formula 1 racing circuit in Europe throughout the 1980s and ’90s, with owner and pilot Andrew Chadwick earning a number of podium finishes to add to White Lightning’s racing pedigree. Chadwick donated the aircraft to Team Condor to compete in the upcoming Air Race E series.

The world’s first electric air race plane has a “contra-rotating” set of two motors coupled together. One spins clockwise and the other counterclockwise, leading to increased efficiency, higher maximum speed, and improved handling capabilities. The aircraft weighs in at 826 pounds leading to increased takeoff and landing speeds, which the team engineers said is easily offset because the acceleration of the electric motors will outperform that of traditional combustion engines.

Airbus is the official founding partner of the Air Race E series and is providing teams, including Team Condor, with industry insight and research as they build and modify their electric racing airplanes. Other teams are close to having their airplanes finished; however, in making their announcement this week at the Dubai Airshow, Condor Aviation became the first team to make it across the finish line in the race to unveil their entry.

“This is a fantastic opportunity to showcase innovation in aviation and the advancement of technology that is arguably the future of the industry,” said Oliver Riddle, Condor Aviation’s senior design engineer. “Our team is hopeful that this will be the first of many projects that branch into the electrification of aircraft. With plans to manufacture a hybrid aircraft designed for commuting, and a fully-electric plane with the capability to land on water, Condor Aviation is exploring multiple knowledge partnerships with universities across the United Kingdom as well as working with Innovate UK to help expedite the decarbonization of the aviation industry.”