We Flew Two Top Secret Stealth Drones. You Can, Too. 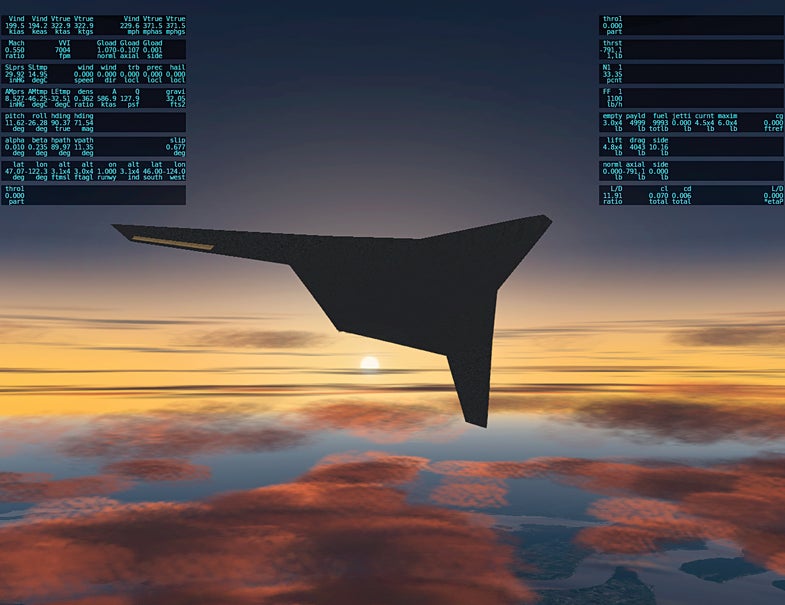 As research for our January 2015 feature story about stealth new aircraft, we created virtual models of the coolest new drones in the sky—the Northrop Grumman RQ-180 and the BAE Systems Taranis. Both are top-secret projects. In fact, the RQ-180 is so “black-world” that it’s only been spotted once or twice, flying high over the U.S. Air Force’s remote Area 51 in Nevada. Nonetheless, leaked information exists on both projects, and in the right hands it can speak volumes about their capabilities.

To that end, Popular Science recruited Austin Meyer, aeronautical engineer and creator of the bench-standard flight simulator X-Plane, to build true-to-life virtual models of both birds and fly them his software. The experiment provided the most detailed look ever at the new class of stealth UAVs.

To fly the RQ-180 and Taranis yourself, download the simulator at X-Plane. The simulator is a full-function demo that limits flying time to 20 minutes per session. No joystick is necessary; you can use keyboard controls and your mouse to fly. Basic flight and installation instructions are also included on the linked page.

Popular Science scoured the scant records available for details on each aircraft—wingspan, fuselage length, engine power—and examined the handful of images that have been leaked to the public. Meyer then used this intelligence to build digital versions of the UAVs and fly them in the X-Plane simulator. He adjusted landing gear placement, wing thickness, and a number of angles and arcs. Then he estimated flight characteristics and performance based on the overall configuration. “The shape of an airplane tells you what it can do, if you just know how to listen,” Meyer says.

On our first flight of the British-built drone, the Taranis lifted off, flopped onto its back, and crashed in a huge virtual fireball. For the next flight, Meyer nudged the center-of-gravity forward. That helped, but only so much. If you push the narrow, flying-wing design too far, it spins out of control; the craft requires full-time computerized supervision to stay airborne. The Taranis has no vertical stabilizer, so it presumably uses speedbrakes for yaw control (steering left and right). “Usually, flying wings can steer by adjusting throttles from one engine to the next,” Meyer says, but in the one-engine Taranis, “speedbrakes create drag, pulling one wing behind and sending the other forward.”

The maiden flight of our RQ-180 model couldn’t have been more different: It revealed the real craft’s aerodynamic elegance. “It’s graceful and easy to fly, which indicates how sophisticated the aerodynamics are. It’s basically an engineer’s dream,” Meyer says. Like a glider, it’s exceptionally lightweight—airplanes with wings that large tend to be heavier—and because of that the model seemed able to fly higher (60,000 feet or more) than current estimates. Because it’s so efficient at high-altitude, the model’s fuel-consumption rate was low, suggesting it can fly farther on a single fuel load—across continents, and for more than seven hours.