We Test-Flew Icon’s A5, The Affordable-ish Personal Airplane For Everyone 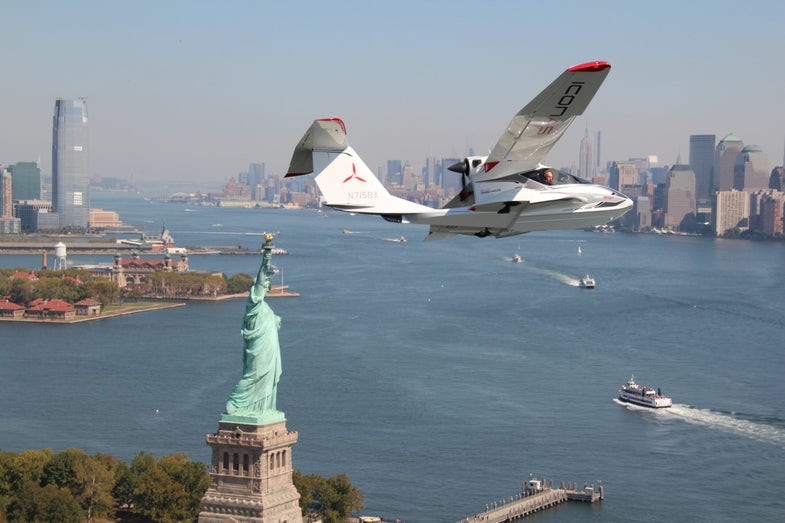 I’ve never piloted an airplane before. I’ve never even so much as sat in the cockpit of a moving aircraft. So I’m naturally a bit nervous when Kirk Hawkins, founder and CEO of Icon Aircraft, asks me if I want the stick. We’re roughly 1,000 feet above New York’s Hudson River in Icon’s new A5 airplane, the Manhattan skyline rolling past on our left, the Statue of Liberty dead ahead.

I do want the stick, and I also don’t want the stick. Above the Hudson River is a busy air corridor. Helicopters buzz past us headed in the opposite direction and dot the sky over New York Harbor ahead. There’s boat traffic below. Hawkins assures me that he won’t let me screw this up. In fact, he says, it’s difficult to screw up badly in this aircraft.

Icon has spent seven years developing a two-seat light sport aircraft simple and safe enough that anyone can learn to fly it. The A5 is that aircraft, and to test the hypothesis Hawkins gives me control of the airplane in one of the busiest airspaces in America.

The A5 is a departure from what most people would typically think of as a small, propeller-driven airplane. Able to take off and land from both runway and water, it looks more like a winged jet ski than a Cessna. The rear-mounted propeller makes for an unobstructed forward view. The wings fold and sweep rearward, allowing the A5 to sit on a trailer for towing and fit through a garage door. Its 100-horsepower engine runs on regular automotive fuel. Perhaps most importantly, the A5 is packed with a number of innovative safety features that make it a very forgiving aircraft for pilots of all skill levels.

“We’re the first pure consumer product airplane,” Hawkins says. And if the idea that something as complex as an airplane can exist as a consumer product takes hold—and Hawkins and his team believe it will—the company could be looking at a multi-billion-dollar market, as more and more pilots take to the sky recreationally.

The A5 is not designed for travel, nor for any kind of specific utility outside of the raw enjoyment of flight. It’s aimed at the same consumer who might spend six figures on a high-performance automobile or a really nice boat. The airframe, constructed largely of carbon fiber and other lightweight materials, is designed to appeal to potential pilots who want something sexier than the boxy, single-prop aircraft associated with weekend warriors of decades past. It takes cues from both Silicon Valley and the auto industry in the way it makes the technology approachable. The engine turns over with the turn of an ignition key. The dashboard—and it’s more dashboard than “cockpit”—resembles the one in my Nissan.

The A5 can trace its roots directly back to an Federal Aviation Administration rule change in 2004 that created a new classification of pilot’s license and aircraft. The Light Sport Aircraft rule and associated Sport Pilot License created the regulatory space for a new type of recreational airplane meeting certain weight and performance requirements. It also created a lower barrier to entry for pilots wanting to fly these slow-moving, lightweight, fair-weather-only aircraft.

Within the new LSA requirements, Hawkins saw room to create an aircraft that would be fun to fly and easily approachable by consumers—something that could bury the complexity and potential safety hazards of flying within good design and dependable failsafe mechanisms. Icon was born, and its collection of engineering talent spent roughly seven years developing the aircraft that would eventually become the A5.

Weighing just 1,000 pounds empty, the A5 tops out just above 100 miles per hour but only needs to be moving 40 to 50 miles per hour at takeoff (a low stall speed is among the FAA’s light sport aircraft requirements). It requires less than 900 feet for takeoff and landing on water and less than 650 feet on a runway. It can travel 427 nautical miles on a tank of gas.

As Hawkins gives me the stick, he reiterates that the A5 is also pretty resilient in the face of poor piloting. My safety valve for this flight is the seasoned F-16 pilot sitting next me (Hawkins flew for the U.S. Air Force for eight years prior to launching Icon). But for everyone else, there are a number of safety features built into the aircraft that help mitigate the everpresent specter of user error.

The first is simple but important: mounted right at eye level atop the cockpit dashboard is an angle-of-attack gauge. An aircraft’s angle of attack is the angle between the wing and the incoming air. At an optimal angle of attack, air flows around the wing and provides lift. But if the angle of attack falls outside certain parameters—if it’s too steep, for instance—the aircraft can stall. That is, it can cease to enjoy the aerodynamic phenomenon of lift. The angle of attack gauge offers a quick and intuitive green-yellow-red indicator (augmented by an audible stall warning alarm) that helps pilots keep their angle of attack on target.

More significant still, the A5 was completely designed around what Icon calls a spin-resistant airframe. When a conventional aircraft stalls and begins to fall through space, one wing will often begin generating lift disproportionately to the other wing, sending the aircraft into a spin. Icon’s engineers have engineered an airframe that simply doesn’t do this.

To prove it, Hawkins twice stalls our aircraft over the Hudson—once by climbing at an unsustainable angle of attack, once by basically dialing back the throttle back to zero. He recovers easily both times. The plane never lists or begins to spin. It glides, stable in the air, until Hawkins corrects the pitch of the aircraft or adjusts the throttle.

The A5 also packs a full aircraft parachute for any airborne emergencies that an angle-of-attack gauge and spin-resistant airframe can’t account for.

At roughly $200,000 for the most basic model, the A5 isn’t aimed at everyone. But Hawkins is banking on the idea that there are a whole lot of people out there that see a $200,000 personal airplane as a more rewarding investment than a boat or sports car. Icon delivered its first A5 to a customer in July and has deposits for 1,500 more.

That’s a three-year backlog for Icon and represents $400 million in revenue. If the A5 catches on, Hawkins sees a $3 to $5 billion market opportunity in the U.S. alone, and perhaps twice that globally as the rest of the world moves toward aircraft classifications similar to the LSA, he says. “We expect this to be a global phenomenon.” 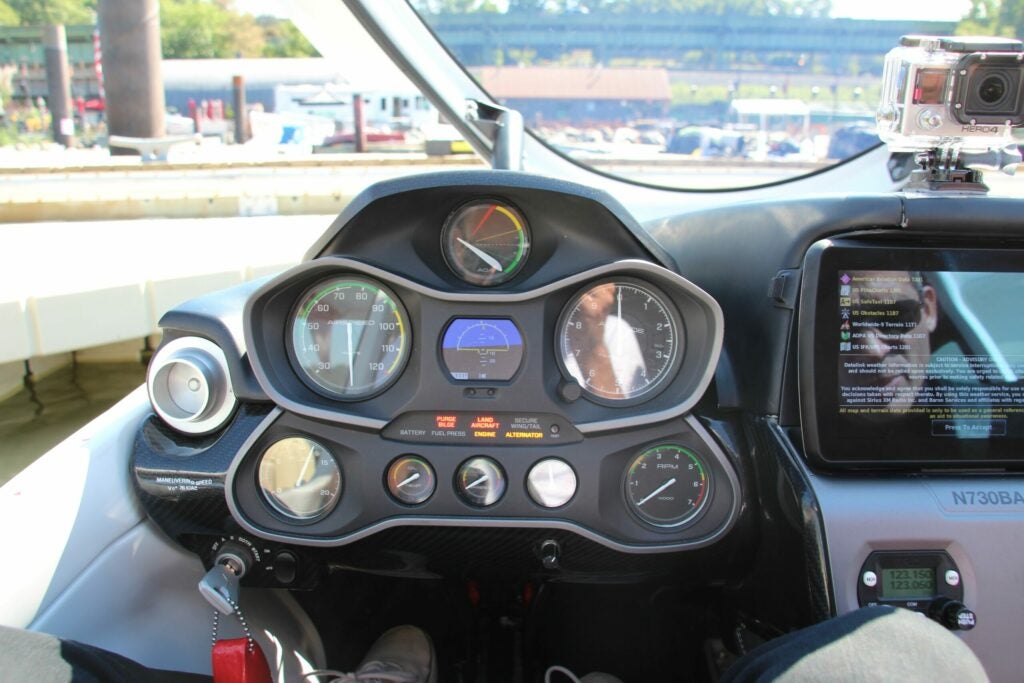