The latest and greatest in ultra-fast photography 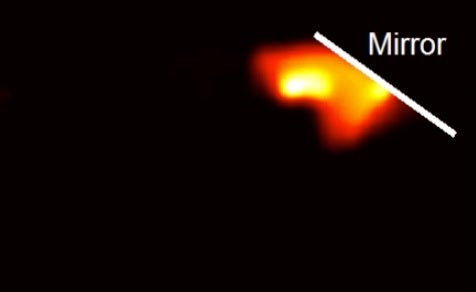 There’s a new, ultra-fast camera that lets engineers take videos of phenomena including the movement of laser light and even faster-than-light phenomena. Watching the videos is like seeing a physics textbook come to life.

Here’s a video of a laser reflecting off a mirror:

Here’s laser light moving through air, then resin. Notice how the light refracts and changes its path slightly when it enters the resin:

The new camera is called a compressed ultra-fast photography or CUP camera. It uses compressed sensing, which allows the camera to make better pictures from gathering less data. The camera works at up to 100 billion frames a second, compared to the millions-of-frames-per-second speed of previous ultra-fast cameras. This isn’t the fastest ultra-fast camera ever invented–in 2011, researchers built a one trillion frames-per-second camera)–but that one only works on repeating phenomena, because it needs to take several pictures of similar events and then piece together what it sees. The CUP camera works on fleeting, non-repeating events.