NASA Uses Drone To Find Orion Capsule In The Pacific

A warbird turned to science 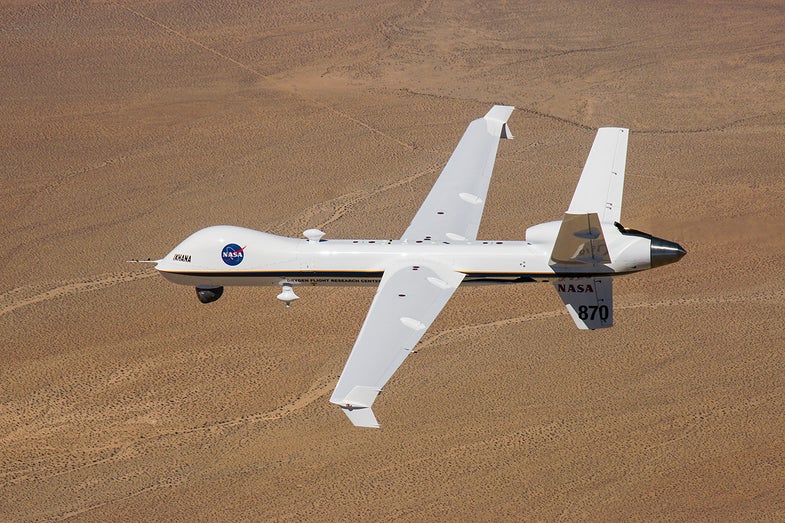 The Predator drone is an iconic symbol of America’s current wars, and its younger — but bigger — Predator-B sibling often goes by the ominous name Reaper. In NASA’s hands, the Predator-B is instead Ikhana, from a “Native American Choctaw word meaning intelligent, conscious or aware,” and today the Ikhana flew to see not insurgents moving across distant sands, but the Orion capsule crashing into the sea.

Ikhana is a good watcher of the waves, thanks to its more than 3,000 pounds of sensors — including radar and imagery equipment. While the specific task may be different than that of the U.S. Air Force’s Reapers, flying a long time while watching a monotonous landscape, or in this case seascape, is exactly the kind of task the Predator-B was made for.

After the Orion launch, the public got to see the payoff first hand. The Ikhana’s infrared cameras detected the capsule, and then optical cameras streamed the video to watchers at NASA and online. Thanks to spotting by the drone, U.S. Navy vessels on the surface moved in to recover the capsule. Here’s the drone-filmed splashdown of the capsule into the Pacific Ocean:

The Ikhana is just one part of NASA’s many programs that utilize drones. In 2010, NASA used a large Global Hawk in conjunction with other aircraft to study weather patterns and hurricane formation. In 2013, NASA flew hand-launched military drones into an active volcano to study the effects of volcano-specific smog. And, NASA’s also tested a quiet, fuel-efficient flying wing and a tilt-wing vertical takeoff drone named Greased Lightning. (Go ahead, try to get that song out of your head now.)