This eyeless millipede shattered the record for most legs 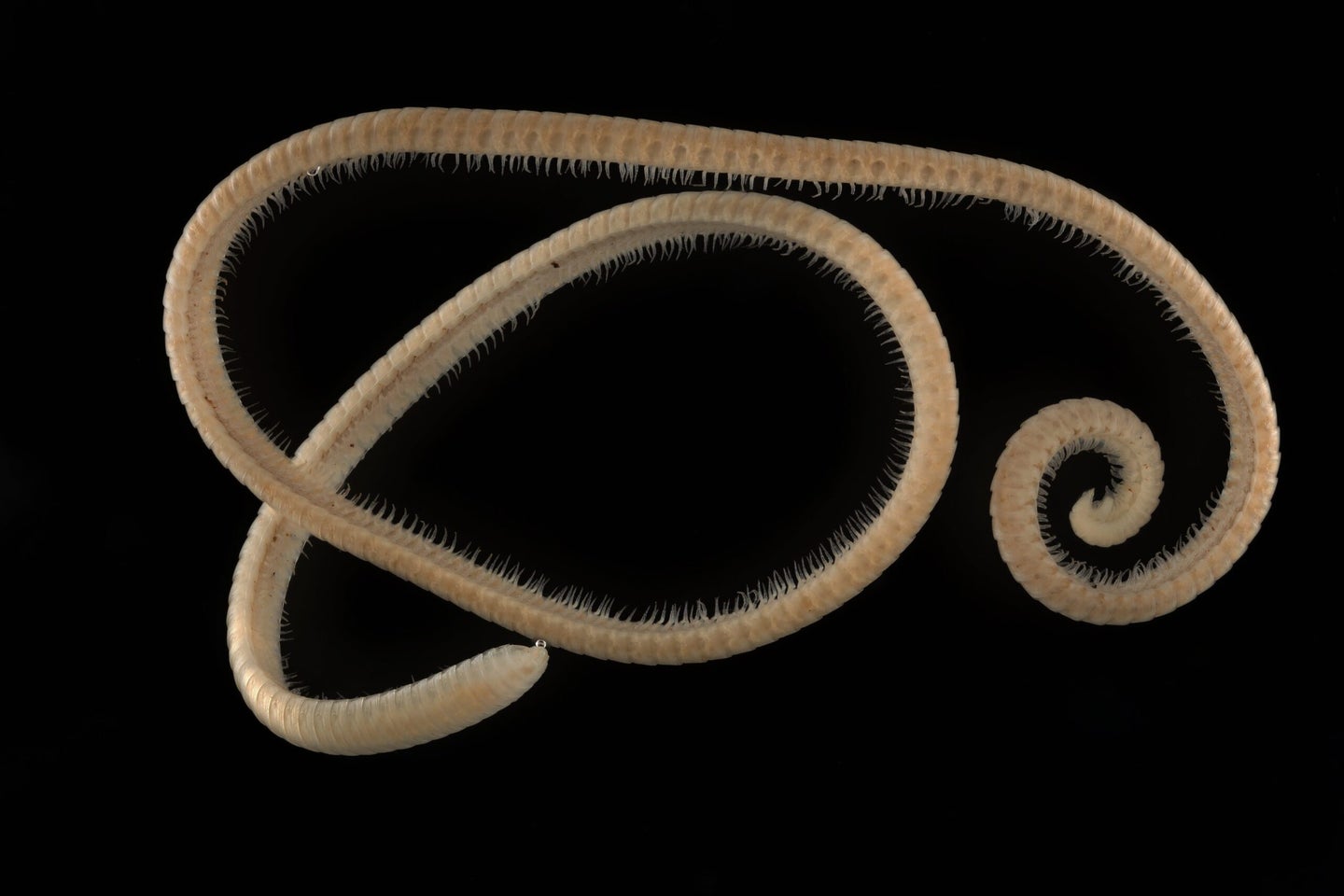 At long last, scientists have discovered a millipede that lives up to its name and actually has 1,000 legs.

The unique critter was found deep underground in Western Australia and boasts up to 1,306 legs—more than the paltry 750 legs previously documented in millipedes, or indeed any other animal. The newly-named Eumillipes persephone and the dethroned previous record holder probably both evolved their seemingly excessive number of limbs to shove themselves through narrow spaces in the soil, the researchers reported on December 16 in Scientific Reports.

“These undiscovered fauna are living in a realm that was previously thought to be devoid of life, but also an ecosystem that we really rely on for screening of environmental toxins and also filtering our water,” he says. “So by studying the organisms that live in these ecosystems, we can help conserve biodiversity on this planet but also help preserve the environment.”

Although the term millipede literally means “thousand feet,” most species actually have fewer than 100 legs, Marek says. The arthropods have been around for more than 400 million years, with some extinct members reaching 2 meters (6.6 feet) in length. Millipedes play an important role in their ecosystem by feeding on decaying organic matter.

The new species comes from an area dotted with drill holes used to prospect for gold, nickel, and other minerals. These holes also offer scientists a portal to a remote and unexplored environment. To find out what might be crawling belowground, Bruno Buzatto, of Macquarie University in Sydney and the University of Western Australia in Perth, and his colleagues lowered in cups baited with rotting leaf litter to attract hungry invertebrates.

When the researchers withdrew a cup from a depth of 60 meters (almost 200 feet) in August 2020, they spied a pale, thread-like millipede. Suspecting that the creature might be packing more legs than any known species, the team reached out to Marek, a millipede specialist. When he examined several specimens, Marek realized that he was looking at “a true millipede.” He counted a whopping 1,306 legs sprouting from 330 ring-like segments in a female member of the species, and up to 818 legs and 208 rings in males (female arthropods tend to be larger than males, Marek says, the better to carry more eggs).

[Related: Glowing millipede genitalia give scientists a leg up in the lab]

In addition to observing the millipedes under a powerful scanning electron microscope, the researchers took DNA samples from E. persephone and compared its genome to those of other species. This confirmed that E. persephone was only a distant relative of the 750-legged Illacme plenipes, which is found in California. The findings indicate that super-elongated bodies evolved independently several times in millipedes that thrive underground.

“Extra legs translates to extra pushing force,” Marek says. “This is coupled with their highly extensible and compressible body, which is amazingly good at squeezing into crevices.”

E. persephone—which is named for the Greek mythological goddess Persephone, who was taken to the underworld by Hades—displays a number of other characteristics suited for its life beneath the surface. The cream-colored millipede lacks both pigmentation and eyes, but has a cone-shaped head with “enormous” antennae and a beak for feeding, the researchers wrote. The females can grow to 0.95 millimeters (0.04 inches) in width and 95.7 millimeters (3.8 inches) long.

In the future, Marek will search for other ultra leggy millipedes in the southwestern United States. “Folks in Phoenix and Tucson have reported super-elongated millipedes that occasionally come up in their backyard when it’s extremely rainy,” he says.

More work is also needed to understand the underground habitat E. persephone and many other invertebrates call home. Scientists wouldn’t have discovered the record-breaking millipede without the drill holes necessary to the very mining practices that may threaten it, Marek notes.

“We’re trying to avoid this phenomenon of anonymous extinction, where a species goes extinct without us knowing about it and without it being described,” he says. “[Anonymous extinction] is  a potential in a lot of areas, in particular where we found this millipede.”