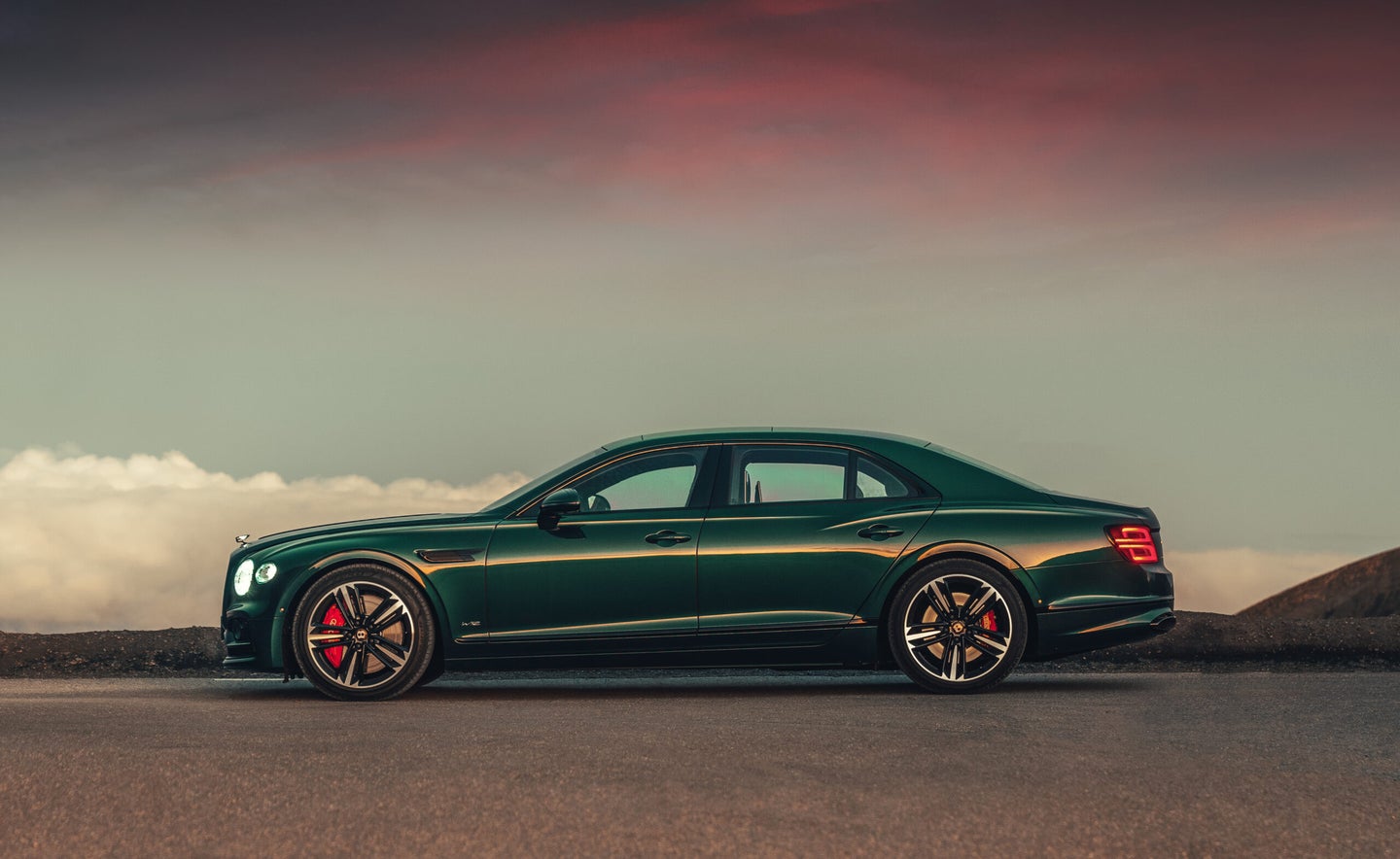 The Route Napoleon is the path that the previously imprisoned former emperor of France, Napoleon Bonaparte, took in his march from Elba to Grenoble in his bid to overthrow King Louis 18th and reclaim lost glory.

Today, this route is a scenic and challenging driver’s road, twisting through the Alps Maritime, so it seems appropriate that Bentley would choose this road to demonstrate the handling prowess of the new Flying Spur sedan. Along the way, the new car reclaimed the mantle of the original 1952 Bentley Flying Spur, a position that had been lost by the disappointing rendition of 2005 to 2018, which was an ungainly adaptation of a front-drive chassis to premium sedan duty.

The most important element in the car’s rehabilitation, which is vastly more successful than Napoleon’s ill-fated comeback attempt, is a switch to the excellent aluminum rear-drive chassis that debuted in last year’s Continental GT coupe, a car that feels lighter to drive than seems possible for a car of its size.

Bentley’s engineers promised that the Flying Spur, as a four-door interpretation of the Continental GT, would feel equally adept slicing up Alpine switchbacks. It sounded like hyperbole in the technical briefing, but the Flying Spur delivered on those promises on the road.

Cars like this aim to coddle occupants with plush comfort and amenities. The new Spur surely provides that, with details like “sculptural” diamond-knurled air vents, open-pore Crown Cut Walnut wood veneers, and three-dimensional quilted leather. And of course, there are dedicated champagne flute holders built into the rear seat’s center armrest. Because Bentley!

But these things, along with the panoramic sunroof, detachable rear seat Touch Screen Remote Control for the sunshades, seat massagers, climate control and mood lighting, and the “digital detox” Bentley Rotating Display that replaces the dashboard’s center display screen with either a trio of classic analog instruments or a smooth wood veneer panel, are all the expectation for a prestige sedan that lists for $214,600.

And in this age of forced-induction mega-horsepower, even the Flying Spur’s 626 horsepower, 664 lb.-ft. 6.0-liter twin-turbocharged W12 (with fuel-saving cylinder deactivation, for the frugal mogul) is not surprising, despite its smooth excellence. Things start to bend toward real performance as we follow the W12’s power output on its way to the pavement.

This strong powertrain has the grunt to push the heavy 6,614-lb. vehicle to 60 mph in 3.7 seconds and to keep going to a shocking top speed of 207 mph. The drivetrain is abetted in the top speed run by a sub-0.30 coefficient of drag, which is an impressive accomplishment for a large sedan that honors its design heritage of blocky, upright lines. The low drag must also contribute to the surprising 19 mpg the Spur scored in combined driving on the European fuel-economy test.

Tearing through the Alps on the Route Napoleon, the Flying Spur continued to disguise its corpulent mass. This is accomplished by the car’s improved front-rear balance compared to the outgoing model, as a result of moving the front axle forward 5.1 inches, shifting the weight rearward and reducing understeer.

Further, the old car’s front-drive-based all-wheel drive system delivered a fixed 40 percent of engine torque to the front wheels, which also contributed to understeer. The new model is primarily rear-wheel drive, with an active system that can shift some power to the front as needed. With power going to the rear wheels under most circumstances, the Flying Spur benefits from the crisp steering response on initial turn-in to corners that isn’t blunted by the front tires struggling to provide grip for both turning and acceleration.

Additionally, the Flying Spur has a rear-wheel steering system that contributes to turning into tight mountain switchbacks, creating the effect of driving a car with the shorter wheelbase of the Continental GT rather than a long-wheelbase sedan. That was the promise by Bentley’s engineers, and driving the car through the mountains proved that not only did it help with handling in sporty driving, the rear steer system also works in practical situations where the turns are so tight and the road is so narrow that a three-point turn would otherwise be needed. The amazing part of this is that Bentley’s team calibrated the system so well that it works imperceptibly. The car just feels shorter than it is.

The new Spur replaces the old two-chamber air springs with improved three-chamber Active Dynamic Ride devices that have an improved ability to control body movement. This system’s ride control is augmented with 48-volt active anti-roll bars front and rear. The higher-voltage system provides the necessary force on the bars to offset the 3+ ton Flying Spur from heeling like a schooner in the turns, and as with the car’s other systems, it delivers on its promise and does so imperceptibly.

It also helps to be able to slow a massive vehicle on the approach to turns, and the Flying Spur’s 420 mm cast iron front rotors are the largest iron brake discs in the industry. Carbon ceramic brake rotors are fashionable on super sports cars, but they are costly, tend to be noisy, and they provide benefits only during prolonged track driving, which is not an expected use case for the Flying Spur. Better to instead provide suitably huge iron rotors, which contribute to a brake system that exhibits superb finesse and power, perfect for hustling along Napoleon’s invasion route.

Bentley executives repeatedly described the Flying Spur’s relaunch as the company’s most significant in recent years. That sounds surprising considering that the model hasn’t been a big seller. But that is because it was underperforming, as customers chose alternatives in consideration of the car’s shortcomings. This new Flying Spur has no evident shortcomings, so we expect its march to reclaim the glory of the original 1950s model to be entirely successful.