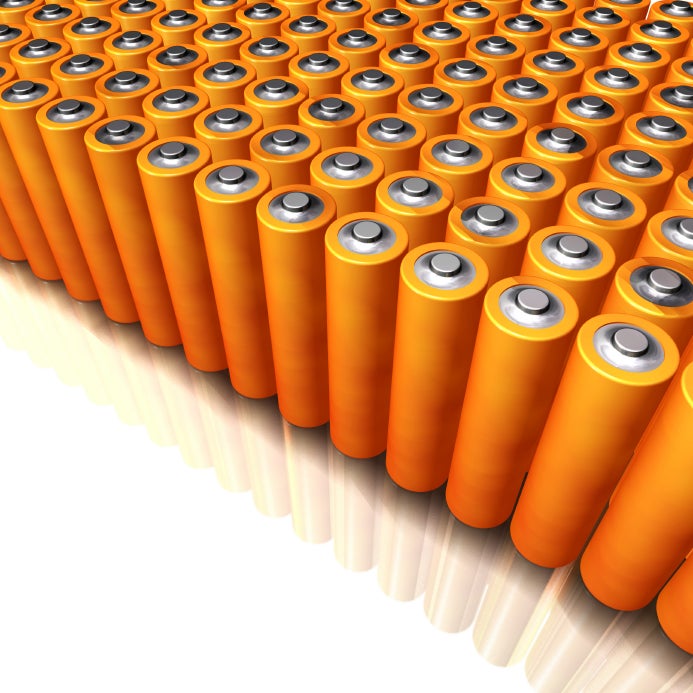 I bet the ’80s was a good decade for Energizer, Duracell and their ilk. I mean, it was a good decade for sharkskin, too, but the ’80s had to be the absolute peak for these battery makers. Suddenly, it seemed like everything required portable juice: that new-fangled wireless TV remote, the Walkman, my futuristic calculator watch and, of course, all of those awesomely high-tech electronic toys like Simon (which actually had its launch party at Studio 54!).

Well, Energizer’s mascot might not have changed since then, but times sure have. Today, I can’t even count the number of portable electronic gadgets I own—each of them requiring its own on-the-go power source. And yet, I probably buy fewer than 10 batteries per year. Even then I’m only buying them for my two TV remotes, smoke alarm and flashlight—things that haven’t changed much since the ’80s.

Nowadays, proprietary batteries are forced upon us by the manufacturers of the very devices we need them for. What’s worse, these batteries are in many cases impossible to replace without performing major surgery on your gadget’s delicate innards (ahem, Apple). While this is quite the cozy and convenient situation for manufacturers, I can’t help but feel screwed. And I don’t like feeling screwed…

Where’s the beef? C’mon, that should be obvious. Anyone who’s ever traveled from Point A to B knows the misery of lugging around the cable salad of different proprietary chargers for a laptop, cell phone, digital camera, iPod and portable gaming unit. I roll up and pack each and every one of these chargers with me on even the briefest of excursions; I’m sure you do too. We’ve all been there. We’ve all had a gadget die on us and not had its charger on hand. For me, it wasn’t as tragic a scenario as having my digital camera conk out on vacation, but it was painful nonetheless. I recently traveled to Europe and, in the rush to get to the airport, neglected to pack my iPod charger. So, while I rocked all the way to Heathrow, the flight back was far less enjoyable. What were my options, after all? I could have gone without, or I could have purchased a new charger. For iPod owners, that’s now a two-part kick in gut: the USB cable, plus the USB-to-power-outlet thingamajig. That’s a £40 expenditure at the apple.com/uk store, so it would have cost me about $80. No thanks.

Some time in the early part of this decade I owned a digital camera by Olympus that accepted standard batteries. If the battery ran out on me during a trip, I could buy a new one at any drug store and be on my way. That’s a right I’d like back. If my iPod dies, I shouldn’t have to wait until I get home or near a power outlet to use it again. If my cell phone sputters out while traveling, I shouldn’t be forced to locate a Best Buy or Verizon store in order to shell out a new charger. Why have we accepted this completely unnecessary inconvenience as a fact of life?

I saw an ad recently for Energizer’s new Ultimate Lithium batteries, which are designed specifically for digital devices. Duracell has something similar called PowerPix, which is a line geared for cameras. Panasonic makes the gadget-friendly EVOLTA. Problem solved, right? Wrong. I can’t find more than a handful of products that actually use these batteries. Energizer’s site lists a few Nikon cameras, a Motorola Bluetooth headset, a GPS unit from Bushnell and some LEGO robots. Duracell’s site doesn’t bother listing anything at all, and Panasonic’s EVOLTA site only goes so far as to show a remote-controlled car and a no-name digital camera, both of which I suspect are stock photography. Typing a hundred variations of “AA batteries portable electronics” into Google is a completely fruitless endeavor.

It’s too bad these battery makers have close to no support from the electronics industry—but it’s understandable why. Electronics manufacturers make boatloads forcing us to buy their chargers and replacement batteries, which they have a convenient monopoly on. Plus, proprietary batteries are essentially custom made for the gadgets they’re powering, which is why our electronic toys have continued to shrink in size over the years. Think about how bloated your iPhone would be if it had to accommodate a chamber for two AA bullets. Energizer and Duracell could easily make a universal slim-profile battery and make it available everywhere. But, what incentive would there be for gadget manufacturers to make their products work with it?

Sadly, our power liberation won’t come without standardization, and standardization won’t come without legislation. Without laws forcing manufacturers to make their products compatible with a standard battery size, this notion of mine will remain forever a pipe dream. So here it is: I’m calling for a new battery size—let’s call it “G” for Grouse. It’s super slim, it’s available in both rechargeable and disposable flavors, it’s available anywhere you can buy toilet paper and it’s compatible with all digital cameras, cell phones, handheld media players and portable game consoles. And because it’s manufactured by different vendors, it’s affordable.

Am I really talking about battery legislation here? I am indeed, and doing my best not to come off as old-fartish as Andy Rooney while doing so. What do you think – do you agree with me, or did I just waste 15 minutes of your life on an absurdly inane issue? Let me hear it!