Eufy Genie review: the cheapest way to get Alexa in your home

Save some dough when smartening up your home. 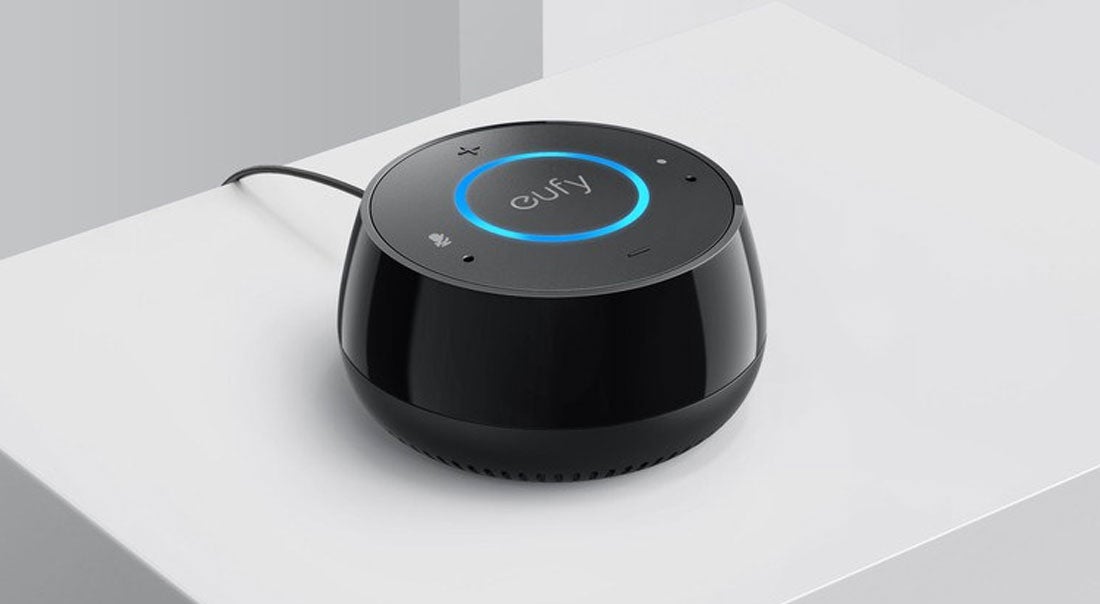 The Genie is basically a low-cost Echo Dot, minus a few key features.

Unlike the Echo Dot, the Genie doesn’t come preloaded with your Amazon account information. You also need to download the EufyHome app to complete the setup process. Once you’ve plugged in the unit and fired up the app, you can add the Genie to your list of Eufy devices, connect to a temporary Wi-Fi network created by the smart speaker, and then return to the app. All that’s left is to sign in to your Amazon account. It takes under five minutes to get everything up and running.

While you’ll still need to download the Amazon Alexa app separately in order to access and enable certain skills, you can do almost everything the Echo can do right out of the box (more on the exceptions below). In order to see if the Genie is a worthy Doppelganger, we swapped it in for our own Echo Dot, which we keep hooked up to a Sonos Play:5 speaker in the bedroom, and used it to set alarms, control various smart devices, and obviously listen to music.

At the time of writing, the Eufy Genie is going for $35 on Amazon—a full $15 less than Amazon’s Echo Dot. The question for most people considering this smart speaker is whether that Jackson is worth holding onto or spending on the Dot. It’s not a clear-cut call, unfortunately.

Indeed, the two devices share more far similarities than differences. Voice commands work the same way. They’re comparable in size (although the Genie is slightly taller and wider). They both have the same physical buttons: a volume up and down, mute, and a manual action (i.e. Alexa) one. That would seem to give the advantage to the lower priced Genie, but there are some internal differences that could sway you the other way.

For one thing, the Genie doesn’t have Bluetooth. While you can connect the Echo Dot to any Bluetooth speaker, you’ll need to rely on the Genie’s 3.5mm AUX line out to run audio through an external speaker. With our Play:5, which is not Bluetooth compatible, this is what we did with the Echo Dot anyway, but depending on your audio situation at home this could be a dealbreaker.

If you’re thinking the Genie’s built-in 2-watt speakers might be better than the Dot’s, prepare to be disappointed as well. While slightly louder, the truth is you won’t want to rely on the Genie or the Echo Dot’s speakers for anything but basic news. Frankly, both are awful for music and you’ll definitely want to rely on a separate audio source if that’s something you want Alexa to control.

And that brings us to the other internal difference. The Genie is actually only equipped with two microphones (the Echo has seven) to pick up your voice. This means if you’re playing music through a decent external speaker at a moderate volume and try to issue an Alexa command, you’ll need to pretty much shout. We tried talking to Alexa to both smart speakers from the same spot in our bedroom while music was playing and found that the Dot was far more sensitive and, in general, did a better job at hearing us.

As the smart home brand of Anker, Eufy makes some great affordable products (see our Robovac 11 review). But in this case, we’re not sure the discounted price is worth what you have to give up, particularly since you’re not spending that much on an Echo Dot to begin with.

If you want a cheap way to see what all this Alexa fuss is about, the Genie is definitely worth considering. But if you’ve already own other Echo devices, need Bluetooth and access to the entire Alexa skillset, just spend the extra $15 or $20 and get a Dot.

Built with a 2W speaker