The health and climate impacts are too big to ignore. 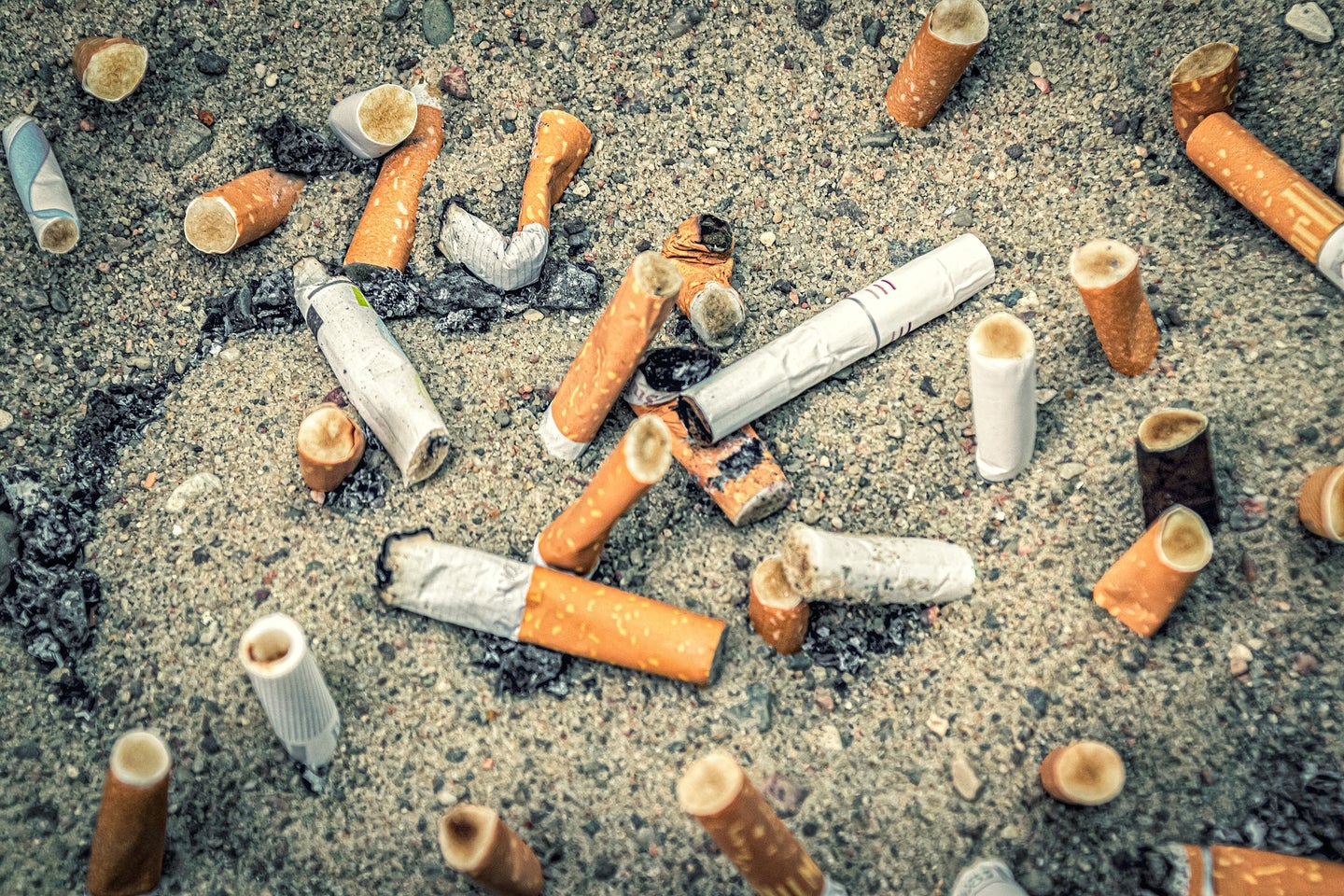 A new report estimates that 65 percent of cigarettes are littered in the US. Pixabay
SHARE

Every year, about 4.5 trillion cigarette butts are discarded globally, making them the most littered item on Earth. Around 90 percent of cigarettes have filters made of a biobased plastic called cellulose acetate, which can take up to 14 years to decompose. Nevertheless, cigarette butts are still considered hazardous solid waste, even if they are thrown away properly.

A menthol ban such as this may minimize health disparities since vulnerable populations have a higher tendency to use menthol cigarettes. Almost 40 percent of smokers across the country prefer menthol over non-menthol cigarettes. Still, this preference is disproportionately high among Black people, socioeconomically disadvantaged populations, lesbian, gay, and bisexual individuals, and those with mental health problems. Menthol cigarette use also persists among racial/ethnic minority youth.

Although the FDA intended to reduce disease and death from cigarette use, research shows that a menthol ban can also benefit the environment.

According to a Tobacco Control letter, adopting the FDA’s menthol ban would offer substantial environmental benefits because it would reduce 3.8 billion cigarette litter annually.

This has already worked in Canada. The country started banning menthol cigarettes from 2015 to 2018, leading many smokers to quit. The authors used the quit rate from Canada’s menthol cigarette ban to estimate that a similar ban in the US can cause 1.3 million smokers to quit. They then multiplied it by 11.9, the average daily number of cigarettes smoked among US adult menthol smokers, and by 365 to get the yearly reduction of cigarettes smoked—5.8 billion.

[Related: Ocean plastic ‘vacuums’ are sucking up marine life along with trash.]

“We multiplied 5.8 billion total fewer cigarettes smoked per year after the ban by the published estimate that 65 percent of cigarettes are littered in the US,” says Lorraine V. Craig, dissemination manager of the International Tobacco Control (ITC) Policy Evaluation Project at the University of Waterloo in Canada who was involved in the study. “This resulted in our estimate that the proposed US menthol cigarette ban would lead to 3.8 billion fewer cigarettes being littered per year.”

Tobacco harms the environment throughout its life cycle

Smoking cessation is known to lower the risk of premature death and cardiovascular diseases. Still, policies that reduce tobacco consumption won’t just bring down the public health and economic costs related to smoking. According to the authors, they may also reduce the environmental harm of tobacco across its entire life cycle.

Cigarettes pollute the land, water, and air during the growing and cultivation of tobacco, the production and use of cigarettes, and the discarding of packaging and cigarette butts, says Craig. About 600 million trees are chopped down to clear land for tobacco crops, and 24 billion tons of water are required to make cigarettes. Meanwhile, the production and consumption of tobacco contribute 84 million tons of carbon dioxide into the atmosphere every year.

“Carcinogenic chemicals and toxic heavy metals such as lead and arsenic are commonly found in cigarettes and can leach into waterways and the soil,” says John Hocevar, director of the oceans campaign for Greenpeace USA, who was not involved in the study. “Once plastic microfibers [from filters] enter waterways, they act as magnets for polychlorinated biphenyls and other toxic chemicals, which bind to the fibers and make them even more dangerous.”

[Related: The FDA is prepping its biggest cigarette crackdown since the ’60s.]

Animals like whales, oysters, and corals may also ingest vast quantities of microplastics in the water. Not only will they suffer from the toxic chemicals, but they will also have a more challenging time meeting their nutritional needs, he adds.

Eliminating toxic chemicals in tobacco production would potentially make cigarette waste less harmful, but it would not keep plastic microfibers out of the environment, says Hocevar. Therefore, it’s best for the environment if governments can control cigarette use.

“The study calls attention to the problem of cigarette butts as a leading source of plastic pollution and the potential for menthol bans to reduce single-use plastics,” says Geoffrey T. Fong, principal investigator of the International Tobacco Control (ITC) Policy Evaluation Project at the University of Waterloo in Canada who was involved in the Tobacco Control study.

Policymakers can reduce cigarette litter further by vigorously implementing tobacco control policies of the World Health Organization (WHO) Framework Convention on Tobacco Control, the global tobacco control treaty, says Fong. Countries bound by the treaty are obligated to implement measures to reduce tobacco use, like regulating the content of tobacco products, requiring the disclosure of ingredients, and placing prominent graphic health warnings on tobacco products.

Policy action to ban the sale of filtered cigarettes may also be an effective measure to reduce single-use plastic pollution, says Fong.

“Any policy that reduces the number of smokers will lead to reductions in cigarette litter,” he adds. “It’s killing two birds with one stone. Or said in a different way, it is a win-win situation: strong tobacco control policies reduce smoking and reduce environmental damage.”