It depends on where you live, but many thrift stores and other donation programs can divert even the most tattered items from the landfill. 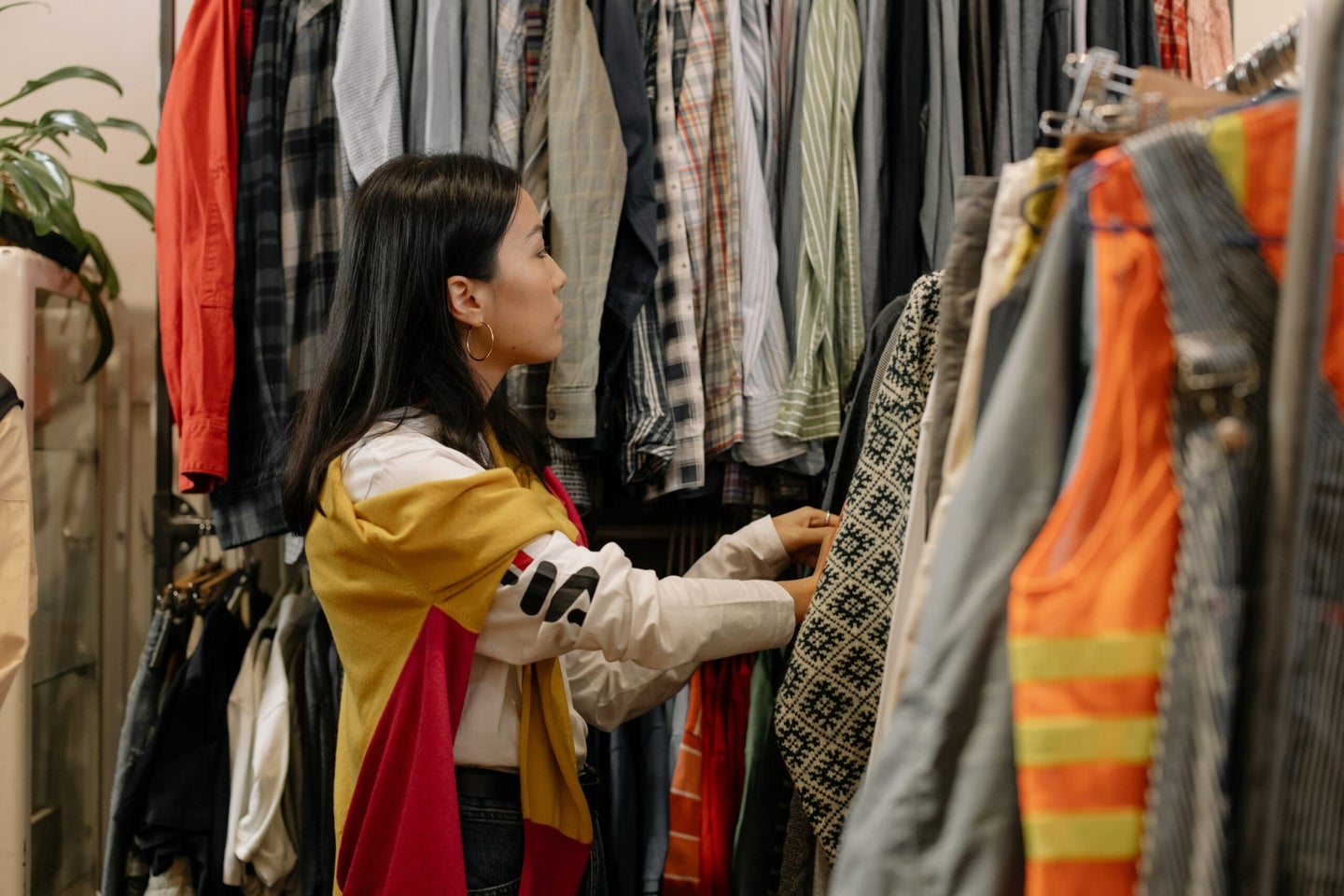 In the past five years, I’ve lived at six addresses. While moving every year is a hassle, it does give me the opportunity to annually clear out any clothes that I no longer wear. Finding a place for lightly used clothes I want to get rid of is easy; I can even make some extra cash selling them at consignment stores. But then there’s the old, worn, and sometimes holey parts of my wardrobe. I know many of these items are of little resale value, but I still hope that they might find a second life as insulation or cleaning rags at least.

Some thrift stores, however, are tired of receiving our exhausted and unwearable items. As a recent Associated Press article found, Goodwill staff around the country reported a spike in stuff that can’t be sold as people purged their belongings while stuck at home during the pandemic. This has caused a strain on thrift stores, which rely on higher quality donations to make money and are increasingly having to pay to have trash hauled away.

While you shouldn’t donate household items that are obviously trash or are hazardous (in the aforementioned article, “donations” of hazardous materials, like lead-acid batteries, were on the rise), the question of what to do with clothes is more complex. Almost all clothes are reusable or recyclable. But ensuring that your textiles stay out of a landfill isn’t straightforward. “Overall, the truthful answer is that there just is no easy answer,” says Marisa Adler, a senior consultant with Resource Recycling Systems. “There’s no scaled, easily accessible, convenient infrastructure for handling used clothing.”

Right now, the majority of textiles produced wind up at the dump. While around 95 percent of global textiles are capable of being recycled, 73 percent still end up in the landfill or incinerator. Less than one percent of clothes are recycled back into apparel, but a larger portion is “downcycled,” or turned into items that are of lesser value such as industrial rags, stuffing, or insulation. In the United States, about 13 percent of clothing and footwear is recycled (including downcycling).

Part of the reason textile recycling rates are low is that the industry is relatively young and lacks the infrastructure to efficiently handle materials. Whether or not you can drop off your unwearable items at a thrift store depends on where you live, says Jana Hawley, an expert in textile recycling and sustainability at the University of North Texas. In urban areas, thrift stores are more likely to have relationships with other facilities that sort and sell materials for reuse and recycling. “Companies like Salvation Army and Goodwill have connections with companies that will pick up unwearables,” says Hawley. “But if you’re located in the middle of rural Nebraska, that doesn’t work so well because the cost of sending a truck out to pick things up is not cost effective.”

If you live in a city, though, chances are that thrift stores in your area can divert clothes they can’t sell in-store to other facilities. In fact, it’s estimated that thrift operations only sell about 20 percent of the textiles they receive within their retail space.

The route from closet to recycler has many twists and turns. Many thrift stores have relationships with so-called “sorter/grader” operations that haul unwanted textiles away. Those clothes may be too worn to sell, or are simply part of a category that the store already has enough of, says Tony Shumpert, the vice president of recycling and reuse at Savers. At sorter/graders, workers separate clothing by quality and type of materials. Clothing is compacted into bales—think separate stacks of polyester, cotton, and silk items. From there, brokers find buyers for the various categories. Clothing is then sold by the pound to resale markets and to recycling facilities. Only about five percent of the material from the sorter/grader is sent to the landfill.

“Over the last 15 years we have really worked hard to find alternative channels for reuse and recycling,” says Shumpert. Clothes donated to a thrift store in the US might end up at another thrift store in Central America or in an open-air market in West Africa. Or they could get “upcycled” back into clothes, or (more often) “downcycled” into things like wiping rags for auto industries.

Shumpert encourages people to bring all their unwanted clothes—provided they are clean and dry—to Savers stores. That means basically everything except heavily stained or soiled materials. The most difficult clothing item to divert from landfills for the thrift chain is single shoes, he adds. Otherwise, he advises people to go for it. “When in doubt, go ahead and donate,” says Shumpert. “Because there are more opportunities for those items than a traditional consumer might believe.” Tonny Colyn, the national director of business development and sustainability in Canada for Salvation Army thrift stores, said that while “gently used” clothing makes the biggest impact for their charity, they are able to work with recycling partners to sell much of the rest of donated clothing.

“Based on extensive dialogue with for profit and non-profit clothing collectors, we advise the public to donate all clothing, as long as it’s not mildewed, wet, or contaminated with oil or hazardous substances,” said Ed Colleta, spokesman for the Massachusetts Department of Environmental Protection, in an email to Popular Science. “In other words, don’t donate the old t-shirt that you used as a shop rag.  Do donate the old t-shirt that’s faded and has a stain, as that will likely be sold for wiping cloths or fiber conversion.”

While many thrift stores can take more worn out items and make some money off them, it’s the ratio of stuff they can sell in-store to everything else that matters. When clothes aren’t sold in stores, they are often sold for pennies on the pound to sorter/graders, explains Adler. “The markets for these down cycling options are not great,” she says. “Most of the profit that those charities get is from the resellable clothing.”

[Related: Thrift shopping is an environmental and ethical trap]

To make things more challenging, we are buying more clothes of poorer quality and throwing them away sooner. From 2000 to 2014, the average person increased the number of clothes they bought by 60 percent, but the amount of time they kept that clothing was cut in half. In the United States, textiles are the fastest growing category of waste at landfills; by weight, the amount of textiles going to landfills increased by 78 percent from 2000 to 2017. The recent high volume of  fast fashion clothes is also finding its way to thrift stores, and replacing the higher-quality clothing they once received. Thrift stores have turned into de facto transfer facilities in handling the ever increasing volume of fast fashion waste.

Making it easier to recycle textiles requires creating infrastructure to handle all those clothes, says Adler. There are a lot of questions about how to do that, though. “Who pays? How do we do it? What are the best collection methods? What are the best sorting and processing methods? What is the network going to be? What roles do brands play? What roles do municipalities play? What roles do the recyclers play? What role does the consumer play? What role will policy play?” Adler says. “On the optimistic side, textile-to-textile recycling [taking old clothes and turning them into new clothes], both mechanical and chemical, is really pretty much ready to commercialize in many respects.” Increasingly, companies are developing processes that can take used polyester or cotton fibers and recycle them into new clothes. So the technology is there, but there are a lot of kinks to iron out in the process of building a more circular clothing supply chain.

Reducing the volume of clothing that gets into the used textile system in the first place can help. Many of the environmental impacts of clothing occur before the items even reach stores, and recycling can require a lot of additional energy. “On the upstream side of it, buy quality materials, use them longer, and decrease the amount you buy,” says Adler. “Don’t assuage your guilt for shopping just by knowing that there is a place you can dump [the clothes].”

As for that trash bag of clothes and shoes you cleaned from your closet, the good news is the vast majority of it doesn’t need to be trashed. Many thrift stores will accept clothes in various states of wear (though calling ahead can help to determine what they’re accepting). There are also donation services focused specifically on textile recycling such as the American Textile Recycling Service, which has a network of bins throughout the country. Many local services exist too; Bay State Textiles operates donations trailers for textile recycling in Massachusetts and Connecticut, for example.

Hawley says when she brings clothes to the thrift store, she divides her lightly used and heavily used clothes into separate, labelled bags. She also ties pairs of shoes together. Adler agrees this is a good tip, adding “the more efficient you can make the process for them, the less onerous it is on [thrift store workers].”