The FDA is prepping its biggest cigarette crackdown since the ’60s 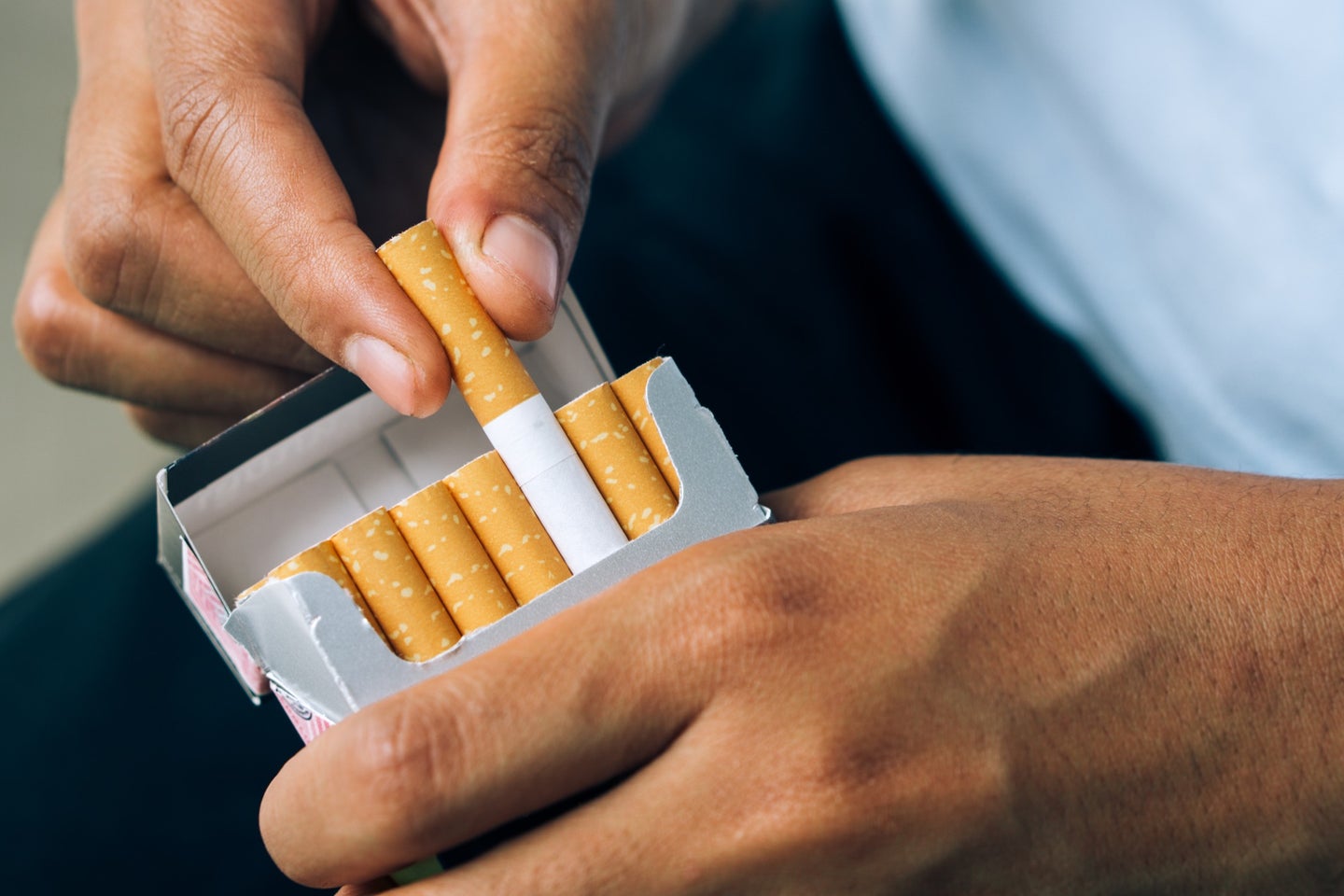 Last week the US Food and Drug Administration announced its intention to ban menthol cigarettes and all flavors in cigars.

Menthol is used in cigarettes as a characterizing flavor (that is, readily detectable) with a subtle minty taste, and has a cooling effect that manufacturers say soothes the throat from irritating smoke. By eliminating this chemical compound and more palatable flavor, the agency hopes to make smoking less attractive to young people and encourage current smokers to consume fewer cigarettes or quit entirely.

This falls in line with a larger crackdown on various types of cigarettes: The FDA recently expanded its authority to cover synthetic nicotine in electronic cigarettes, forcing manufacturers to comply with the same standards as other products that contain tobacco-based nicotine.

The menthol ban in particular would represent one of the biggest FDA shake ups on cigarettes since the 1960s.

“I see no downside to eliminating menthol from cigarettes,” says Vaughan Rees, director of the Center for Global Tobacco Control at the Harvard T.H. Chan School of Public Health. “I think the US is finally coming to grips with this long-standing issue, and I sincerely hope that the FDA takes decisive action on it.”

Decades of aggressive marketing of menthol cigarettes has led to “grievous health disparities and hundreds of thousands of avoidable deaths” among Black Americans and other historically marginalized groups such as sexual and gender minorities, Daniel Giovenco, assistant professor of sociomedical sciences at the Columbia University Mailman School of Public Health, said in an email.

“If implemented appropriately, this ban will be a massive victory for public health and health equity,” Giovenco said. “Eliminating this product from the marketplace is a major step in reducing the unequal burden of disease and death caused by tobacco products.”

What the science says about menthol

Menthol was first added to cigarettes in the 1920s and marketed (inaccurately) as a healthier and safer alternative.

Menthol is a compound naturally found in plants, like peppermint, and  produces a cooling sensation—it’s often what makes your toothpaste or spearmint gum taste and feel minty fresh. But unlike those safe products, menthol in cigarettes can mask more dangerous chemicals. Menthol makes the smoke feel smoother on the throat, opens the airways, and has mild anesthetic properties, says Rees. “Mentholation not only makes it easier to smoke, it encourages deeper inhalation and therefore greater exposure to the toxic constituents that are present in tobacco smoke,” he says.

There are more than 7,000 chemicals in tobacco smoke, hundreds of which can cause cancer or are otherwise harmful. These toxic compounds can damage the cardiovascular system, kidneys, brain, respiratory system, and more, says Judith T. Zelikoff, a professor of environmental medicine at the NYU Grossman School of Medicine. “So you’re not just getting the menthol in cigarettes,” she says.

Additionally, menthol interacts with nicotine in the brain to boost its addictive effects, the FDA says. For all of these reasons, it argues, menthol increases the risk that young people who start smoking will become hooked.

There were more than 18.5 million menthol cigarette smokers aged 12 and older in the United States as of 2019, which include a disproportionate share of teens and young adults, Black Americans, and other racial and ethnic minorities. According to one estimate, banning menthol cigarettes and cigars in the US would lead to a 15 percent reduction in smoking and prevent roughly 650,000 deaths by 2060.

A number of countries have already banned menthol, including Canada in 2017. Researchers found that these restrictions caused 59.1 percent of surveyed smokers to switch to non-menthol cigarettes and 21.5 percent to quit smoking (an additional 19.5 percent still smoked menthols purchased from First Nations reserves).

“The movement is in the direction that we would hope for, which is reduced consumption or increased cessation,” Rees says.

A decision “decades in the making”

Opponents of the menthol ban have said that it would put a disproportionate burden on Black smokers and increase policing of Black neighborhoods. However, the FDA emphasized that the new regulations won’t make it illegal for individual consumers to possess or use menthol cigarettes and flavored cigars.

“If these proposed rules are finalized and implemented, FDA enforcement will only address manufacturers, distributors, wholesalers, importers and retailers who manufacture, distribute, or sell such products within the US that are not in compliance with applicable requirements,” the agency wrote.

African Americans smoke at similar rates to the general population but face more serious health consequences. “Main probable causes for this phenomenon are the high overall mortality rates due to economic and social conditions and the high prevalence of menthol among African American smokers, which causes them to be more addicted and quit less,” health policy researchers at the University of Michigan noted in a 2021 report in the journal Tobacco Control.

A number of public health groups, including the African American Tobacco Control Leadership Council and the National Medical Association (the country’s oldest organization representing African American physicians) say that the regulation is a crucial and long-awaited step. They joined with several other organizations, including Action on Smoking and Health and the American Medical Association, to petition the FDA to ban menthol-flavored cigarettes in 2013 and sued the agency in 2020, ultimately spurring the proposed new restrictions.

The menthol ban is a historic move “decades in the making,” Phillip Gardiner, co-chair of the African American Tobacco Control Leadership Council, said in a recent webinar hosted by the plaintiffs. “The bottom line is that menthol cigarettes and flavored little cigars have been and are the main vectors of death and disease into the Black community,” he said.

Menthol cigarettes account for about a third of the $80 billion cigarette market in the US. Banning them would represent a huge win for tobacco control activists, Rees says. This would stand alongside other momentous decisions such as the Public Health Cigarette Smoking Act of 1970, which forbade cigarette ads airing on television and radio; the 1998 Master Settlement Agreement, which was the largest civil litigation settlement in US history and restricted tobacco advertising aimed at youth; and the FDA gaining regulatory control over tobacco in 2009.

It will take time to fully remove menthol cigarettes from the market, Gardiner said in the presentation, noting that the FDA’s proposal would allow menthol cigarettes to be sold for a year after its final publication. “The tobacco industry will try and drag this out as long as it can,” he predicts, describing the proposed regulations as “just the beginning of the end.”

Taking aim at other tobacco products

In 2009 the Family Smoking Prevention and Tobacco Control Act prohibited all characterizing flavors other than tobacco and menthol in cigarettes. However, until now flavors such as strawberry and cocoa have still been permitted in cigars.

Like menthol, the FDA says, these flavors make tobacco products easier to smoke and banning them will cut down on the number of young people who become regular smokers. This element of the FDA’s announcement has been “somewhat overlooked,” Giovenco said, but is vital given that cigars now rival cigarettes in popularity among teenagers and carry similar health risks.

However, by far the most popular tobacco products among the surveyed youth were e-cigarettes, which were used by 7.6 percent.

The national spending bill enacted on March 15 included legislation that might address the rise in young e-cigarette users. Congress granted the FDA oversight over all nicotine products, whether derived from tobacco plants or made in a laboratory. This rule, which took effect on April 14, closed a loophole that e-cigarette companies have used to avoid regulations intended to curb vaping among young people, and would require manufacturers to seek the FDA’s permission to sell synthetic nicotine products.

[Related: A ban on flavored vaping products could help signal to teens that vaping isn’t as safe as they think]

It will be critical to balance efforts to prevent vaping among adolescents with the necessity of helping adult smokers quit, Rees says. “E-cigarettes represent an important tool to help adult smokers reduce their health risks arising from smoking, and increase their chance of long term cessation,” he wrote in a followup email.

In a March announcement authorizing several tobacco-flavored e-cigarette devices, the FDA stressed that all tobacco products are harmful and potentially addictive.

“We are making progress in our review of flavored ENDS [electronic nicotine delivery systems], and we will continue to deny marketing of products where the applicant hasn’t provided enough evidence to show that the potential benefit to adult smokers outweighs the considerable risk to youth,” Mitch Zeller, director of the FDA’s Center for Tobacco Products, said in the statement.

The FDA is accepting public comments on its proposed rules for menthol cigarettes and flavored cigars through July 5, after which the agency will decide on its final standards.

Once the ban is implemented, Giovenco said, public health organizations and healthcare providers must be prepared to help people quit so they don’t merely switch to non-menthol cigarettes.

“Whenever a new policy restricts or prohibits an addictive product, it’s important to simultaneously expand resources that provide people with a viable ‘off ramp,’” he said. “This could include increasing access to quit services, counseling, and nicotine replacement therapies.”

Menthol is just one of many features that manufacturers use to make cigarettes more appealing, Rees says. “If menthol goes away, there’s a likelihood that tobacco manufacturers are going to resort to other workarounds to continue to make cigarettes easy to inhale, mislead smokers about the potential health risks, and reduce the harshness in and the heat from tobacco smoke,” he says. “So bans on filtered ventilation and bans on other additives that change the smoothness and harshness should also be considered in conjunction with a ban on mentholation.”

Another important goal, Gardiner noted, will be eliminating menthol from other products such as e-cigarettes and as a less conspicuous ingredient in cigarettes. “Getting rid of it as a characterizing flavor is just step one in a process of getting rid of it altogether,” he said.