New York’s governor has been drifting through the wind; wants to start again. 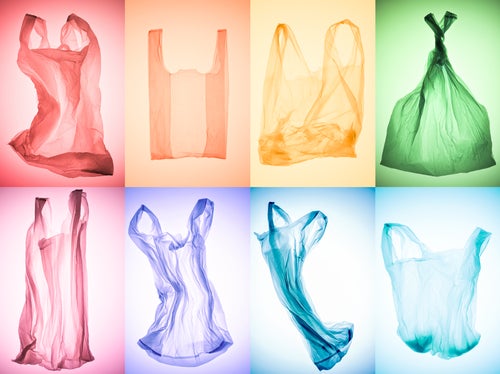 Spring has finally arrived, and as I look out my window at the sprawling urban park next door, I see birds in their best feather tuxedos chitter at potential mates and runners in their safety neon chatter with friends. A slight breeze ripples through the scene. The view, I assure you, could not be better, save for just one thing: The wind isn’t just ruffling the new leaves of my neighborhood trees. It’s also sending a shiver through the strips of two ragged plastic bags ensnared in the branches.

Each year, Americans use 380 billion plastic bags, according to the Environmental Protection Agency. The plastic in these bags, which is manufactured from fossil fuels, requires approximately 12 million barrels of oil annually, which is enough energy to power 1,400 international flights aboard a 747. And because plastic bags can’t be recycled in your household bin (you have to drop them off at special sites, lest they destroy standard sorting machines), they end up sandwiched in our landfills, floating in our marine ecosystems, or flapping in the trees just outside your door. And it doesn’t stop there. The bags are either cleaned up (to the tune of $12 million a year year in New York City alone), or eaten by unlucky animals including birds, turtles, and fish.

As research on the environmental burden of plastic bags emerges, many cities have moved to ban single-use plastic bags or limit their use through fines and other policies. The first American city to take action was San Francisco, which banned thin plastic bags in 2007 and later added a 10 cent fee to carry-out bags. The entire state of California followed in 2014, when it passed a law banning any kind of single-use plastic bag in groceries or pharamacies. Dozens of cities and counties followed suit.

On April 23, after having overruled a 2017 city council surcharge on plastic bags in New York City, Gov. Andrew Cuomo announced his intent to ban single-use bags statewide. This would make New York the second state to implement such a ban, after California. Cuomo’s proposal, which surprised many New Yorkers given his stiff opposition to previous plastic bag legislation, will face skepticism in the state legislature, as many representatives see such rules as evidence of government overreach. But for the scientifically-inclined, the most important question is simple: do plastic bag bans actually work?

The answer, based on all the evidence we have so far, is an emphatic yes. While the success of a plastic bag ban depends on the specifics of each city’s relevant laws, essentially every community that has regulated its sale of single-use bags has seen significant reductions in plastic trash. Preliminary data from the 2017 Coastal Cleanup Day in California—the first such event held after the state instituted its ban—suggested that the amount of plastic bag litter had been cut in half. The final tally pegged plastic bag trash as 3.1 percent of the total recovered litter, compared to 7.4 percent in 2010.

Other cities have reported similar results. In Seattle, which banned plastic bags in 2012 and charges 5 cents for single-use paper bags, the city reports a 50 percent reduction in plastic bags sent to landfills in the first four years post-ban. San Jose, California, which banned plastic bags back in 2012, reports a 76 percent reduction in plastic bags found in local waterways. And Ireland, which did not ban bags but implemented a 15 euro cent tax (about 18 cents in USD) on their purchase, saw average bag use per person fall from 328 bags a year to just 14.

While the statistical success of these programs is undeniable, it’s not all footloose and plastic-free. In Austin, Texas, where restrictions on single-use bags were first proposed in 2011, the city reported a significant reduction of the plastic bags it regulated. But it also reportedly saw an uptick in the use of still-legal heavy-duty plastic bags, which are more easily reused than thinner plastics, but can have their own negative environmental effects if they’re not put to good, repeated use before disposal. What’s more, Austin’s bans and proposals for similar legislation in other Texan cities spawned a protracted legal battle over the environment, the rights of businesses and consumers, and the power struggle between cities and states.

Ultimately, the success of a single-use plastic bag ban in New York or any other city or state is dependent on the will of the people. Such bans have been shown time and again to significantly reduce plastic waste, but only if they are carefully crafted, responsibly implemented, and residents know what the path forward really looks like. If it comes down to carrying around a spare tote bag for my groceries or letting my neighborhood trees be strangled by plastic debris, I pick the tote bag every time.