Hawaii’s prolonged drought is pushing native species to the brink

Protecting native forests is crucial for bringing in water, but the drought—and invasive hoofed mammals—aren’t making it easy. 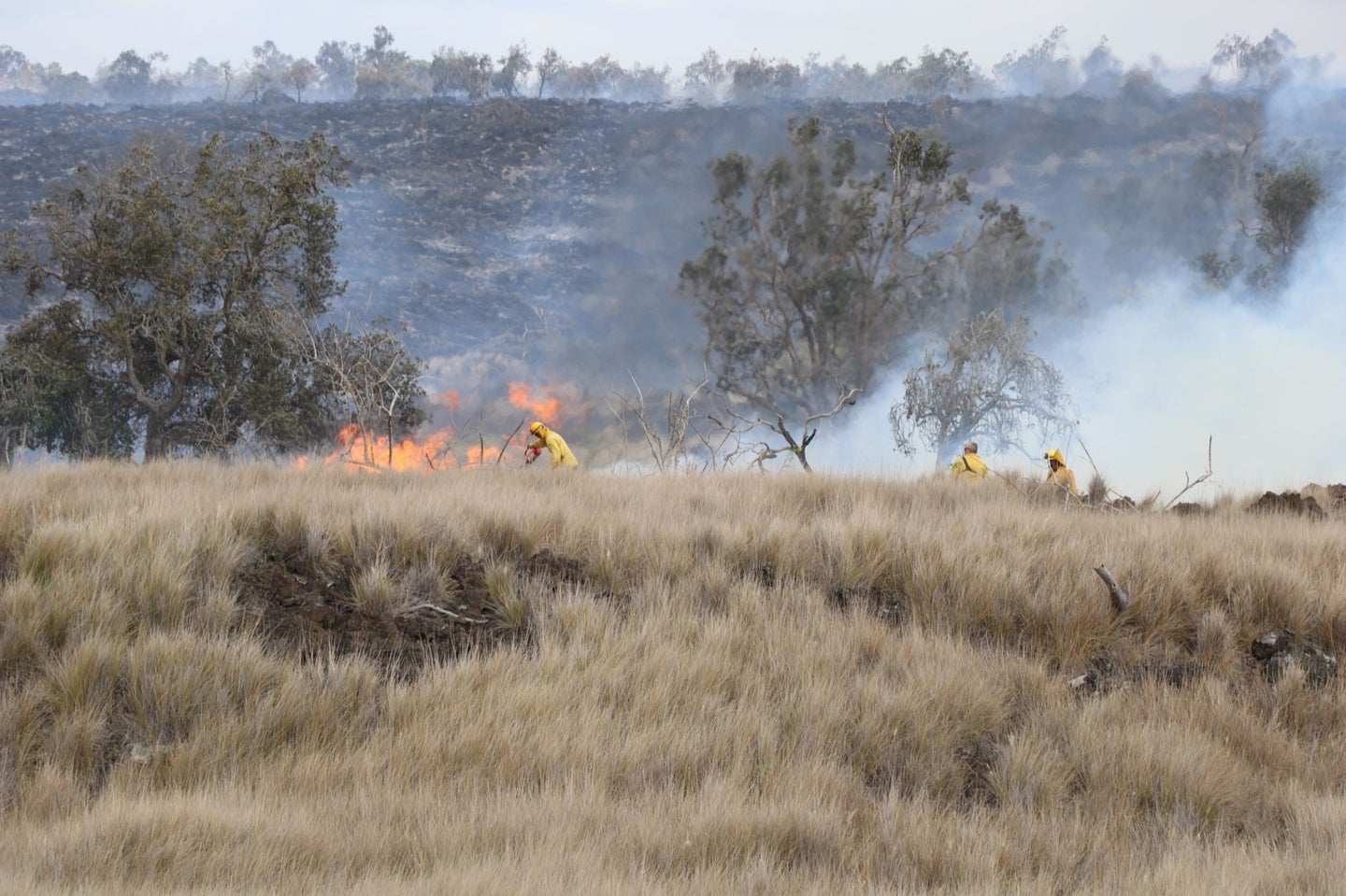 Ground operations tackle the Leilani fire, which burned tens of thousands of acres in and around the US military’s Pohakuloa Training Area on the island of Hawai'i in August 2022. Wildfires like these are fueled by Hawaii's recent drought. Hawaii Department of Land and Natural Resources
SHARE

One of the wettest places in the United States is Mount Waialeale on the Hawaiian island Kaua’i. The 5,148-foot peak receives an average of 374 inches of rainfall every year, but even with that annual deluge on deluge, the island state as a whole is in a period of prolonged drought.

Nearly all of Hawaii is currently experiencing some degree of drought, from “moderate” to “exceptional,” according to federal monitoring data. While this year is not as severe as the 7-year dry period that ended in 2015, it falls in line with a larger pattern of declining inundation in Hawaii over the last 30 years. To make things worse, the drought has also corresponded with a rise in average temperatures, which speeds up evaporation.

“Globally, we’re seeing more novel kinds of drought,” says Abby Frazier, an assistant professor of geography at Clark University in Worcester, Massachusetts, who studies climate change and Hawaiian habitats. “A concern is that we don’t know the potential for drought to have transformational impacts on our ecosystems.” Since droughts are becoming longer, more severe, and more frequent, researchers like Frazier are concerned about the possibility that ecosystems will be irreparably changed and unable to bounce back even if it starts to rain regularly again.

There’s a lot scientists still don’t know about how Hawaii’s unique ecosystems are responding to the prolonged lack of rain, which is closely linked to overall changing climatic conditions. But it’s clear that the dynamics of invasive species management and endangered species protection are changing alongside the ecosystem.

Despite the threat droughts pose to forest health, biologists know that maintaining it is one of the best ways to lessen the impacts of the drought and keep as much water as possible in the ecosystem. Hawaii’s forests have adapted to capture moisture that’s in the air in the form of fog or low-hanging clouds. “The collection of cloud water is as important as rainfall,” says Emma Yuen, a program manager at the state’s Department of Land and Natural Resources. “But if you don’t have the native vegetation there to collect moisture, you’re going to have a huge decrease in water entering the groundwater supply.”

[Related: These Hawaiian corals could hold the secret to surviving warming waters]

But a lack of water isn’t the only threat to forests: Invasive animals, primarily hoofed ones like deer and pigs, damage native vegetation. Unchecked without natural predators, wild deer, pigs, and goats can do serious damage—particularly during a drought, when herds have been seen aggressively grazing on integral native plants. When patches of earth are left bare, it enables dry, invasive grasses to move into the cleared dirt—serving as fuel and driving up the risk of forest wildfires.

“Hawaii doesn’t get national press about wildfires, but we’re on par with Western states as far as percentage of land burned,” says Yuen. In 2021, the largest fire in Hawaii’s history burned almost 40,000 acres—which might sound small compared to the nearly 180,000 acres that burned in California that same year. But when you compare the size of the fires relative to the size of the states, a much greater portion of the total landmass of Hawaii was scorched. Weather conditions and encroaching invasive grasses on the islands were starting to resemble the most fire-prone mainland states, Hawaii Public Radio reported in 2019.

The wildfires also feed a negative cycle, explains Yuen, since invasive grasses grow back in the space created by the blaze and become fuel for bigger ones in the future. What’s more, the wildfires can worsen drought—in addition to eliminating cloud moisture-gathering vegetation, the flames and heat leave the scorched earth less permeable so that precipitation doesn’t sink into it and instead runs off into streams and waterways. That means less water replenishing groundwater aquifers and higher risk of more frequent and destructive flooding.

Since fire isn’t a normal historical occurrence in Hawaii’s forests, wildfire mitigation approaches like prescribed burns (a commonly used tactic in the West), aren’t an option. A burn ban has been in effect in Hawaii since 2012, which limits all burning practices and requires permits from  agricultural industries or land management. And unlike in California and other parts of the American West, where many species of trees and other plants are well-adapted to weather some flames and regenerate healthfully, native Hawaiian vegetation is not meant to burn. Prescribed burns would be destructive instead of healthy and regenerative, as Hawaiian trees and plants might not come back stronger (if at all). Instead, the main available tools to fight wildfires are fire breaks—gaps in the vegetation cut to contain the flames’ spread.

[Related: How we can burn our way to a better future]

The drought, combined with Hawaii’s unique topography and geography, also makes managing invasive species and protecting endangered ones particularly challenging. As an island state, it’s home to a number of endemic species—organisms that evolved on the islands and don’t exist anywhere else. Some species can be hyper-specialized to live in a specific ecosystem. While this is true of many species around the world, on confined islands of Hawaii, those particular ecosystems can be very small. There are a disproportionately large number of endangered species relative to landmass available on the Hawaiian Islands, which has only been exacerbated by the pressures from climate change and invasive species.

“Over the course of six miles, average annual rainfall in Hawaii can vary from 15 inches to 366 inches in a year,” says Frazier. The wide variability can leave many species stranded. Flora and fauna have nowhere to reasonably relocate if liveable habitats disappear year to year due to wildfire, drought, or invasive species—if they’re able to move at all.

Local organizations are working on conservation efforts to preserve native wildlife from the recent dry spells. Frazier is part of the Pacific Drought Knowledge Exchange, a network of regional ecological researchers, natural resource managers, and other experts who share information about the drought’s impacts and how to mitigate them. She says that there’s a lot of conservation managers looking for creative solutions, like replacing lost native species with  different native plants that might be better suited to a region’s changing climate. However, she adds that there’s a dearth of future climate information needed to inform good planning, and a lack of awareness of Hawaii’s particular challenges in the mainland US.

The islands might be known for waterfalls and lush rainforests, says Frazier, but “we need people to know we have drought, too.”