We're running out of time to figure this out. 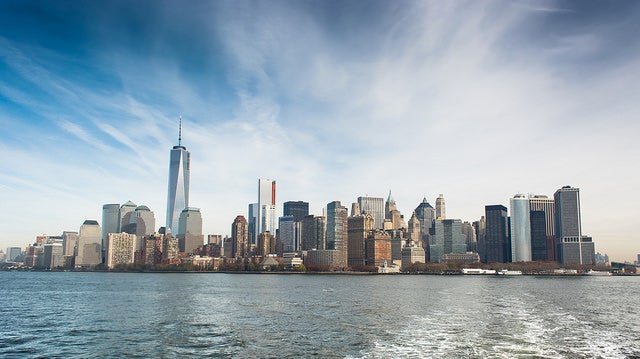 New York City was not built to withstand an onslaught of floodwater.

Much of the city is protected only by sand dunes, vegetation, or low walls. New York’s flood zones are packed with more than 400,000 residents and $129 billion worth of real estate. The aging sewer system handles both storm water and waste and is easily overwhelmed; Hurricane Sandy sent 1.6 billion gallons of raw sewage spilling into nearby waterways.

Even the city’s position works against it. “New York City is vulnerable to storm surge because of its special location at the junction of the New Jersey coast and Long Island,” says Ning Lin, an assistant professor of civil and environmental engineering at Princeton University. “If a storm comes, then the water would be pushed into that angle without any other place to go.”

Lin has spent years studying how water could inundate New York. She’s finding that flood damage will take a punishing toll on the city in coming years, and no single strategy to stem the tide will work for every neighborhood.

As climate change makes storms more intense and spurs rising sea levels, the danger to New York City will rise as well. Lin and her colleagues have estimated that storm tracks may actually shift eastward in the next several centuries, making hurricanes less likely to hit the city. However, sea level rise will mean that storms that do pass through New York will unleash higher floods. Floods that reached 7.4 feet above normal tides used to hit the city once every 500 years. Floods this height now happen roughly every 25 years, and will strike every five years by 2030 to 2045, the team reported in October.

“That’s a dramatic change that we should consider in our planning for the city,” Lin says. She is now investigating how much flood damage New York City can look forward to and how best to avert it, and presented her initial findings December 15 at the fall meeting of the American Geophysical Union in New Orleans.

To calculate the flood risk facing New York City’s buildings, Lin’s team considered the hazards posed by more severe storms, rising seas, and development along the waterfront. They found that coastal development is unlikely to have much of an impact on the city’s vulnerability because there is so little room to build. “The floodplain is already very full,” Lin says.

However, sea level rise and more fierce or frequent storms will sharply increase the risk of flood damage. The researchers estimate that storm surge currently causes about $78 million annually in damage to New York’s buildings. By the end of the 21st century, however, that cost could jump to the equivalent of more than $500 million.

Lin has begun to compare how much different flood defenses could minimize these losses. Hurricane Sandy galvanized New York into planning for future floods, she says. “It demonstrated how vulnerable the city is.” The city is upgrading its subway system and designing buildings to be more resilient to floods. It’s also considering more ambitious solutions like the “Big U,” a giant barrier that would wrap around lower Manhattan. The proposal has been awarded more than $800 million by the city and the U.S. Department of Housing and Urban Development. However, construction is not expected to begin until 2020.

Until now, researchers have mostly considered coastal protection measures separately. But elevating individual homes won’t do much to lower the city’s overall flood risk, and building seawalls is expensive. It’s likely to be more effective and affordable to combine different strategies in each part of the city, Lin says. Densely populated areas could be protected by more robust seawalls, while buildings could be lifted up in other flood-prone neighborhoods.

There may also be ways to construct seawalls more affordably in New York, Lin believes. We could build walls to withstand the risks posed by floods in the near term, and then raise them over time as the risk of vast storm tides grows. “But that has to be planned now,” Lin says. She is calculating how levee heights would need to increase over time to protect the city.

New York is already ranked as the most vulnerable city in the nation to coastal flooding by Climate Central, and will probably continue to have the greatest number of people in floodplains in the coming decades. And even Lin and her team’s most encouraging prediction—that storms may steer out to sea more in future—is far from certain. Other studies have drawn the opposite conclusion, meteorologist Jeff Masters of Weather Underground told New Scientist.

Whether or not the Northeast sees more hurricanes, the floods that do hit the city will become more devastating in the years ahead. For New York, there isn’t a moment to lose in figuring out how to stay above water.