Greek yogurt creates a ton of wheyst—but wheyt! There may be a whey forward for all that whey. 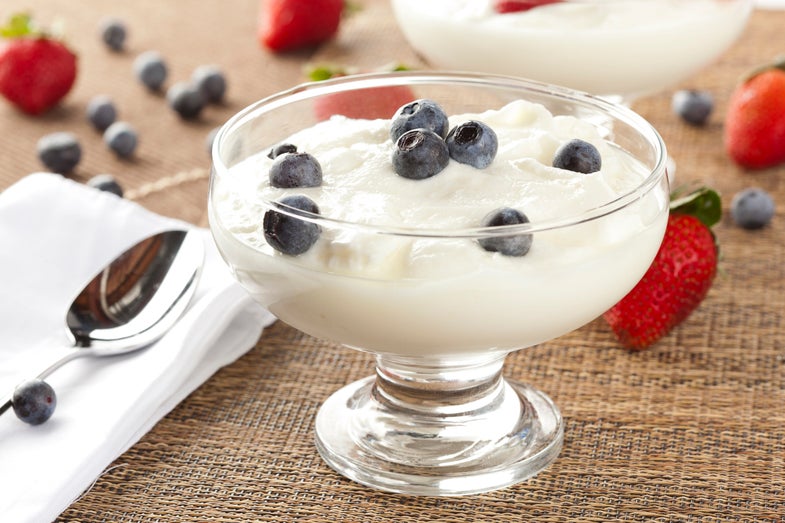 In the past decade, Greek yogurt has morphed into one of America’s most popular breakfast and snack items. In fact, from 2007 to 2012, the production of Greek yogurt in New York state nearly tripled, going from 106,000 to 315,000 tons a year. And for good reason: it’s absolutely delicious, full of gut-friendly microbes, and jam-packed with nearly twice the protein found in many other yogurt types. But there’s always a downside. Greek yogurt’s production process leaves behind literal tons of wasted whey (the liquid part of yogurt). In 2012, New York state produced 315,000 tons of the yogurt and left 630,000 tons of whey behind as waste. But in a paper out this month, researchers say they’ve figured a way to use bacteria and the otherwise wasted whey to create biofuel and food for livestock.

Greek yogurt is what’s known as strained yogurt. That straining process gives the dairy product its creamy, thick texture. But the process itself involves removing most of the liquid whey. One batch of whey isn’t all that much. But when you multiply that by the amount of Greek yogurt being produced today, it adds up pretty quickly. Technically whey is mostly water—about 93 to 95 percent water, in fact. But the rest is composed of lactose (the sugar found in milk) and a much smaller amount of calcium, phosphorus, magnesium, and potassium. Not all of these elements are safe to dump en masse into a water system or the ground. In fact, according to Iceland’s Reykjavik Grapevine, which did an investigation into whey waste not only from Greek yogurt but also from other similarly made dairy products like Skyr, a 2007 whey spill in Wisconsin caused a huge number of fish to die on the Milwaukee River.

The United States manufactures most of its Greek yogurt in upstate New York, where large trucks of wasted whey are then whisked off to sewage treatment plants. But Lars Angenent, a microbiologist at Cornell University and the University of Tübingen in Germany, thinks he has a better idea.

Whey is made up of lactose, fructose, and lactic acid. Bacteria love sugar. So Angenent and his team combined the waste with a group of anaerobic bacteria, which eventually produced two compounds: caproic acid and caprylic acid. These two products can do a few things. When left by themselves, they are what’s known as green antimicrobials. If produced in significant quantities, farmers can add them to their feed as a replacement for antibiotics. Theoretically, this would be better than using more powerful antibiotics in animal feed, which can lead to antibiotic resistance.

But with a few more chemical reactions, the two compounds can become biofuels. Unlike fossil fuels, biofuels are produced from renewable plant or animal matter through natural biological processes, and are far more sustainable and better for the environment.

Right now, Argenent thinks that creating antimicrobials for livestock is the best option. “They key question is if we can make the process into a profit-making entity when we make fuel. With low fuel prices the answer is no. But fuel prices may rise in the future, and we will then be ready by having produced antimicrobials.”

Before he can do any of this, however, Argenent says he and him team need to figure out how to perform the requisite chemical reactions on a more massive scale. For now, they can’t create enough of the compounds at once to make the whole process worthwhile.

But if it hurts the environment, then should we all just eat a little less Greek yogurt, too? Argenent argues no. “Greek yogurt is a very protein-rich and nutritious food for humans, and it may cut down on meat production,” he says. It would be smarter to recover all the materials in the waste product and use them, rather than turning to something else for protein that has an even larger environmental footprint.

So enjoy your Greek yogurt, especially if you eat it in lieu of other protein-rich foods like red meat, which have a far greater environmental impact. And take comfort in the fact that someday, Greek yogurt may be as friendly to the earth as it is to your stomach.