For places with limited land space, water-bound solar may be the next frontier. 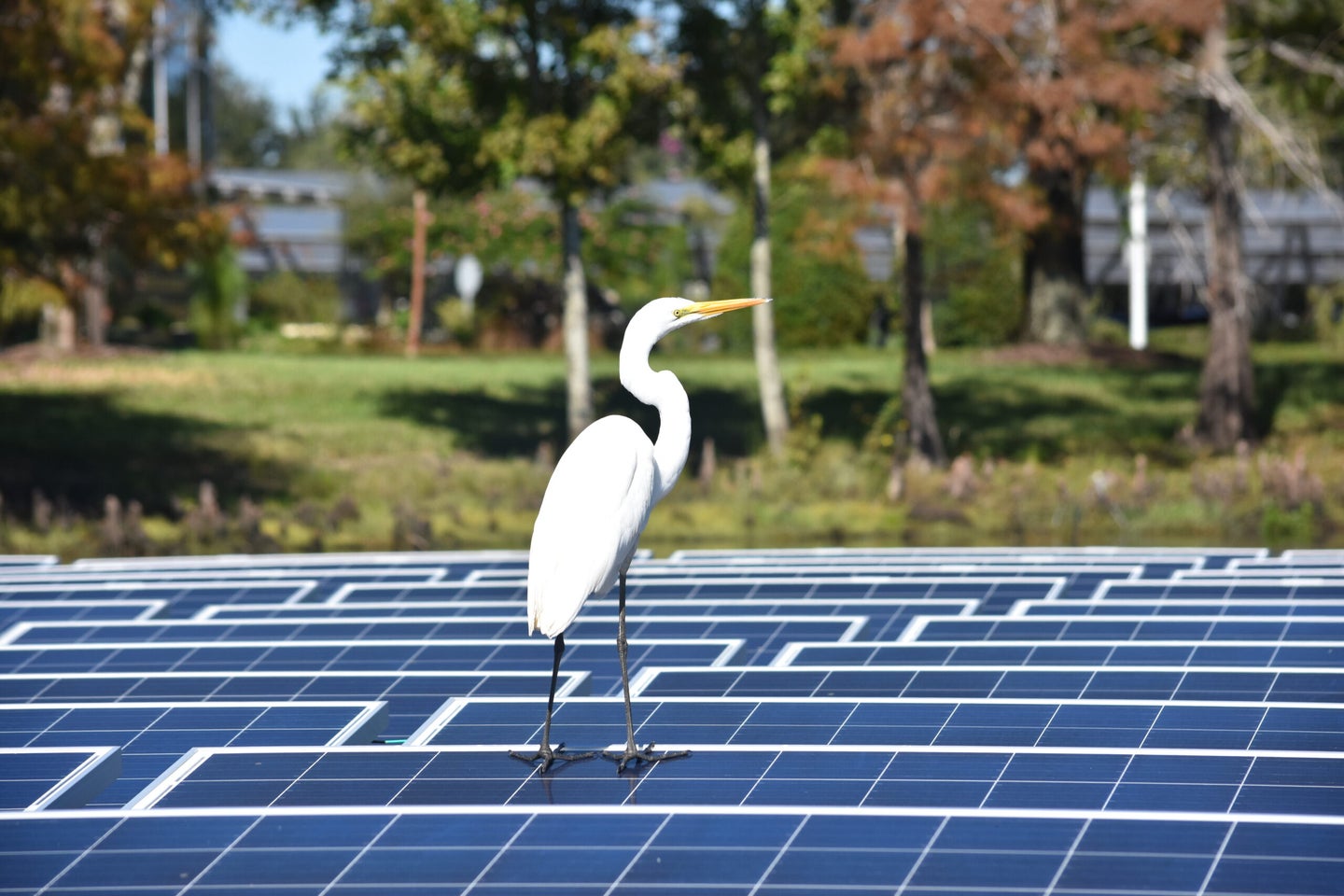 Animals react shockingly well to the panels in their ecosystems. Rebecca Hernandez
SHARE

Solar panels can be placed on your roof, on a plot of land, or basically anywhere else where they  are anchored to something solid. That said, there are only so many solid spaces available to install them. To beat climate change, our electricity mix is going to need a lot more renewable energy systems to take over fossil fuels.  Many in the solar industry are looking for a new home for solar panels—possibly even floating on water.

Floating solar farms have been around for over a decade, but water-bound panels became much more prominent in the last few years. The basic idea is to attach solar panels to plastic floats which then drift on a body of water. These floating solar arrays are typically placed on man-made bodies of water—a town’s water reservoir, an irrigation reservoir, a water treatment facility—as to avoid interfering with plant and animal species that live in natural bodies of water. For instance, the United States’ largest floating solar farm sits on a wastewater pond in California and has a nearly five megawatt capacity.

The floating solar industry is expected to grow dramatically over the next decade, but only about two percent of this year’s new solar installations are water-bound.

Rebecca Hernandez, an associate professor of earth system science and ecology at the University of California, Davis, has been studying the benefits of floating solar and its potential environmental impacts.  “It’s land-sparing in many cases,” Hernandez tells Popular Science. “We found that three of the sites we were looking at, they had intentionally sited floating solar on water because they ran out of room for land [solar].”

Another benefit to floating solar, Hernandez says, is the natural cooling effect of water. Solar panels work more efficiently in colder temperatures because of water’s evaporative cooling effect, Hernandez says. Liquid zaps heat away from surface water when it escapes as vapor, which chills the water down even more. Floating solar is estimated to be up to 15 percent more efficient than land-based solar.

The environmental impacts of floating solar are still a bit of a mystery, Hernandez says. There’s potential for the plastic floats the panels sit on to degrade over time and possibly negatively impact a body of water, she adds, but more research will be needed.

Some floating solar arrays are placed on bodies of water where animals live, such as stormwater runoff ponds. However, Hernandez has seen animals who now share their home with floating solar adapt rather quickly according to these solar arrays. She says she’s seen birds stand on the floats while they hunt for fish and otters use the floats to hide.

“We get to watch birds swoop right over the array,” Hernandez says. “I was afraid birds would be flying into the panels because they think they look so much like water, but the remarkable thing is that the birds are really adapting this stuff.”

“The advantage is that obviously if you have a hydroelectric plant, you have the infrastructure to send the electricity somewhere,” David Sedlak, a professor of civil and environmental engineering at the University of California, Berkeley, tells Popular Science. “The downside is sometimes these hydroelectric reservoirs are used for recreation. I don’t know how much of a reservoir you want to cover if part of the reason that it’s supported by the public is that they can go boating or fishing there.”

Floating solar can also exist on the ocean. The Singapore-based solar energy provider Sunseap deployed this technology last year in bays where the panels will be relatively protected from large waves and other harsh weather conditions. The conditions on the open ocean would likely be too tumultuous for such a solar array. So far, the plan seems to be working quite well.

Floating solar is still a new way of approaching solar power compared to the land-based panels we’re used to, but it appears to have a lot of potential in areas where land for solar farms is scarce or there is simply an abundance of water. The more solar we install, on the ground, on rooftops or even on the seas, the less we’ll be reliant on fossil fuels.