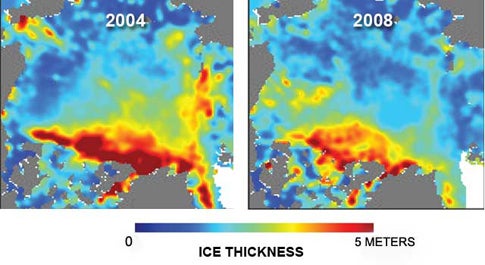 Satellite photos showing how warming reduced the thickness of Arctic ice between 2004 and 2008. courtesy of NASA
SHARE

In the 30 plus years since scientists started using satellites to track the area of the Arctic ice cap, the size of the ice pack has gotten smaller and smaller. However, new data from NASA’s IceSAT satellite shows that the ice has been melting faster than anyone predicted.

What they found is not good. It seems that the thick, permanent ice that used to constitute the majority of Arctic ice has been replaced by thinner, seasonal ice that melts away during the summer months. So not only is the ice covering less area than ever before, but the ice that does form is thinner than ever before. In total, the scientists calculated that the ice pack shrank by 57 percent between 2004 and 2008, thinning by 2.2 feet.

This evidence complicates the increase in polar ice seen in teh winter of 2008. Some have argued that the increase in the area of the ice pack in the winter of 2008 proves that global warming isn’t a straight forward, incontrovertible fact. However, this new data from IceSAT shows that while the area was indeed larger, the thickness was much lower. And due to that reduced thickness, even though the ice covered a larger area in 2008 than in 2007, the winter of 2008 may have actually seen the lowest aggregate volume of Arctic ice in recorded history.

This may be great news for shipping companies waiting for the Northwest Passage to finally open up, but for those of us who live in coastal cities, any news that ice is melting even faster than we thought is fairly dire.

[via NASA, Reuters, and The New York Times]