Publishing in the journal Nature, a group of 29 scientists have established a comparative scale for rating the immediate threat... 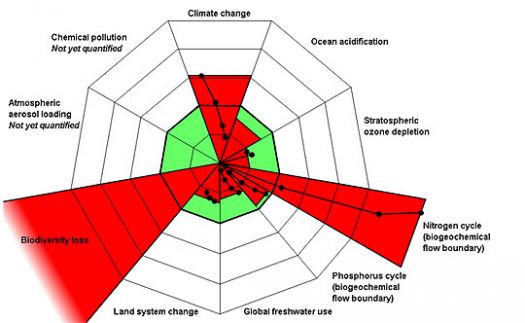 Publishing in the journal Nature, a group of 29 scientists have established a comparative scale for rating the immediate threat posed by nine environmental hazards–everything from climate change to ocean acidification. And while our warming climate gets most of the attention, more immediate problems may be brewing in our intensifying lack of biodiversity and out-of-whack nitrogen cycle.

Of the nine ongoing hazards (climate change, ocean acidification, ozone depletion, the nitrogen and phosphorus cycles, freshwater use, land use, biodiversity loss, aerosols in the atmosphere, and chemical pollution) the group pegged nitrogen runoff as our second-worst problem, and biodiversity as the first. There’s not enough data, the researchers say, to accurately plot chemical pollution or aerosol contamination on their scale, but as you can see, we’re already in what they’ve defined as the “danger zone” for three conditions–climate change being the third, in order from worst to still-pretty-terrible.

As for nitrogen, it’s an essential nutrient for plants, so we’ve been pulling nitrogen gas out of the atmosphere to make nitrogen fertilizer. Then that extra fertilizer ends up getting washed into lakes and streams by the rain. Algae in the water think this is delicious and they multiply like crazy, clouding the water and choking out other life. Like fish. And at the end of the day, our actions with nitrogen also end up putting nitrous oxide (a greenhouse gas) into the atmosphere.

But the biggest problem right now is biodiversity. The current rate of extinction is about 100 to 1,000 times greater than what’s been healthy throughout the planet’s history. The paper points to our land-hogging ways, upsetting the balance of nature to cause more forest fires and other natural disasters, and producing invasive species as the main culprits. The biodiversity problem is expected to get even worse in the future, as rising temperatures threaten animals across the globe.

To learn more and read the scientific article, check out the Stolkholm Resilience Centre, which helped put together the paper.