California’s Running Dry And Nobody Knows Why

The state is in the fourth year of the worst drought in its history. Why can’t scientists explain it? 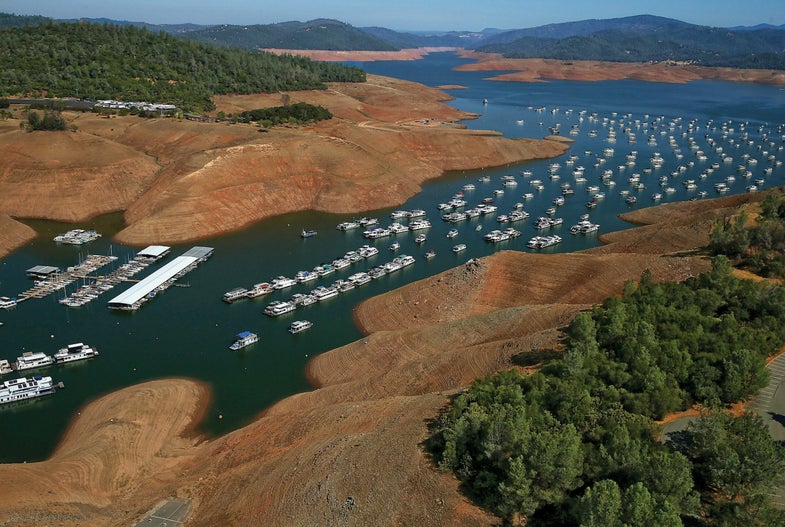 About a decade ago, scientist Lisa Sloan made a dire forecast: melting Arctic ice could produce an epic drought. By changing the path of winter storms over North America, it would send far more rain to Alaska, and much less—about 25 cm, or 30 percent less, per year—to the American West. The findings were alarming enough to attract national headlines. But before long, all was forgotten, trampled over by a parade of newer studies with their own dire predictions. Sloan’s paper could have remained in obscurity—and probably would have—but for one thing: The terrifying scenario she describes appears to be coming true.

In case you’ve been living in a cave, California is in the midst of what by most measures is the worst drought in the state’s history; it began in 2011 and has since claimed the lowest annual precipitation, the highest annual temperature, and the most extreme measurements on record for things like soil moisture and water tables. Governor Jerry Brown enacted the state’s first mandatory water restrictions in April. And nearly half of California now falls under the U.S. Drought Monitor’s most severe category—”exceptional drought”—where it is expected to remain through at least the rest of 2015. In other words, the worst drought in the state’s history is probably going to get even worse.

Meanwhile, on the ground: glimpses of an apocalypse. Homeowners are stealing water from canals, petty thieves are stealing it from fire departments, and god-knows-who is stealing it straight from the San Joaquin Delta. Lawns are brown, farms are fallow—agricultural losses are projected to top $2 billion—and the Sierra Nevada mountain range is largely snowless. The fake-grass business is booming; the swimming-­pool industry is not. Oh, and by the way, the state itself is sinking—because that’s how much groundwater has been lost.

Depending on your Facebook feed in the past few months, you might think that this particular drought is definitely being caused by climate change; or that it’s definitely not climate change; or that environmentalists are somehow to blame—or perhaps a colossal mass of warm water known as “The Blob.” Stacked against Sloan’s work, those claims raise a question: How can we forecast something almost perfectly and still not be certain what’s causing it?

First things first: No one disputes that the most immediate cause of the current crisis is an entity known as the Ridiculously Resilient Ridge, or Triple R for short. The Triple R is a “blocking ridge,” a region of high atmospheric pressure that disrupts normal wind patterns. Imagine a boulder that rolls into a stream and forces the water to flow around it. Blocking ridges are like boulders in the air currents (in this case, the polar jet stream) that carry storms around the globe. They materialize pretty regularly, and can even grow quite large, covering thousands of miles in some cases. But they tend to dissipate quickly, usually within a few weeks.

The Triple R has persisted for far longer than that. It was first observed during the second half of the 2012-13 rainy season. By January 2014, it stretched from California to Alaska and was diverting the jet stream, with all its Pacific storms, far to the north—dumping a record amount of rain near the Arctic Circle, and leaving California, Oregon, and Washington parched. The ridge is still there now, where it might remain for some time to come. “It’s unprecedented in the observational records,” says Daniel Swain, the Stanford Ph.D. student who gave the ridge its moniker. “And it’s the most obvious reason for storms being deflected.”

This is where things get messy. One potential culprit is melting Arctic sea ice, as Sloan identified in 2004. Normally that ice acts like a blanket, preventing the warmth of the ocean from escaping into the atmosphere. When the blanket disappears, or even just wears thin, heat escapes more readily. In her study, Sloan projected this escaped heat could form Triple R-like columns of warm air that would push Pacific storms northward, in more or less the fashion we are witnessing today.

Melting Arctic sea ice is a consequence of global warming, which is itself a consequence of rising atmospheric greenhouse-­gas concentrations. As it happens, Swain and his adviser, Noah Diffenbaugh, found in a 2014 study that a persistent high-pressure anomaly like the Triple R is more likely to occur at current greenhouse-gas levels. Taken together, Sloan’s and Diffenbaugh’s findings would seem a smoking gun: Climate change is causing the California drought. So why isn’t the case closed?

The fake-grass business is booming; the swimming-pool industry is not. Oh, and the state itself is sinking.

To answer that question, it helps to do a little thought experiment. Imagine a pot of almost-boiling water. Picture a small circle at the center of its surface. Tiny bubbles are starting to rise all around that circle. You turn up the heat, and the bubbles come faster and bigger. Eventually one bubble hits the circle itself. Was it because you turned up the heat? Maybe. But bubbles were rising before that point, so one might have hit your circle even if you had never touched the dial. Weather events—droughts, storms, heat waves—are like those bubbles. And climate change is like that finger turning up the heat; you can say that it increased the probability of the bubble rising in that particular spot, but you can’t say that the bubble would not have arisen without it.

Hence the frustratingly immutable truth of climatology: It is impossible to tie individual events to climate change. Further complicating matters is that climate itself is astonishly complex, and drought is an ideal example. Yes, heat from global warming can be a contributing factor—heat increases evaporation which, in turn, dries out the land. But a drought’s defining feature is lack of rain, not necessarily rising heat. In fact, droughts have been known to occur during cold periods. Added to that, rain and heat are hardly the only factors that need to be considered. Land use (whether a region has more farms or forests or cities or suburbs), ocean currents, El Niño events, or as Sloan’s model showed, melting Arctic sea ice, can all conspire to worsen or alleviate any given drought.

The need to avoid absolutes leaves scientists in complicated terrain. For example, many agree that as the planet warms, the American West—the Southwest in particular—will experience higher heat and more evaporative drying. But whether warmer temperatures will actually lead to less rainfall remains a source of debate. It doesn’t seem to have yet. A recent report from the National Oceanic and Atmospheric Administration states, “The current drought is not part of a long-term change in California precipitation, which exhibits no appreciable trend since 1895.” It goes on to say, “[The Triple R is] symptomatic of natural internal atmospheric-ocean variability.”

Some use that inherent uncertainty to misconstrue the situation. In April several media outlets used the argument of “natural variability” to blame the drought on environmentalists. The gist was that dry periods in the West are nothing new and yet other areas seem to cope with them well enough. Water just needs to be managed better. By preventing the construction of dams and reservoirs in an effort to save certain endangered fish species, environmental do-gooders have allowed millions of acre-feet (hundreds of millions of gallons) of water to be flushed into the Pacific rather than diverted for farming and other uses.

There are many things wrong with this hypothesis, but let’s stick to the biggest flaw: No matter how well California manages its water supply, it almost certainly won’t have enough to meet its growing needs. According to one estimate, those hypothetical dam projects would add just 1 to 2 percent more water to the state’s dwindling reserves. “The argument is total nonsense,” says Peter Gleick, a MacArthur Fellow and president of the Pacific Institute. “It misrepresents both the drought’s causes and its severity.”

As a general rule humans prefer order over chaos, so climate models are just sophisticated ways of doing what we’ve always done: trying for a glimpse of the future. But models have their limits. “I liken them to apple-­pie recipes,” Sloan says. “All apple pies basically consist of the same thing: apples and crust. But the other ingredients might differ, and so might the outcome.” Sloan’s study relied on just one of those models, and only a few variables, namely sea ice melt. She didn’t factor in land use or population or any of a dozen other things that might impact drought. Her findings seem to reflect what’s going on today, she says. But they still don’t tell the full story.

If the Triple R is the supervillain, the Blob would be its minion.

To truly understand the California drought, scientists have to understand the global climate system, which has countless weird ticks. The jet stream appears to be slowing down and meandering off-course, giving us both the Triple R and its evil twin, the Terribly Tenacious Trough (which New Englanders will recall was behind this winter’s polar vortex). Then there’s the Blob, a massive layer of exceptionally warm water—300 feet deep and 1,000 miles wide—that’s settled off the West Coast. Caused by the Triple R, it is exacerbating the drought by warming the air as it heads toward land, reducing the chance for snow or rain even further. If the Triple R is the supervillain behind the drought, the Blob would be its minion.

In February, scientists from Columbia, Cornell, and NASA analyzed various climate models to see what the decades ahead might hold. They found that climate change has increased the likelihood that a “megadrought”—a decades-long period of low precipitation and high evaporation—will consume the western United States sometime in the next 30 years. Again, the studies would seem to have found a smoking gun, but the authors cautioned that their predictions are not carved in stone. Even just one El Niño could alter things dramatically.

And therein lies the rub: No one, not even a scientist with access to some of the most powerful computers in the world, can predict the future with 100 percent certainty. The most they can do is nudge us toward the answers and hope that we make the final connections ourselves, before the water runs out.