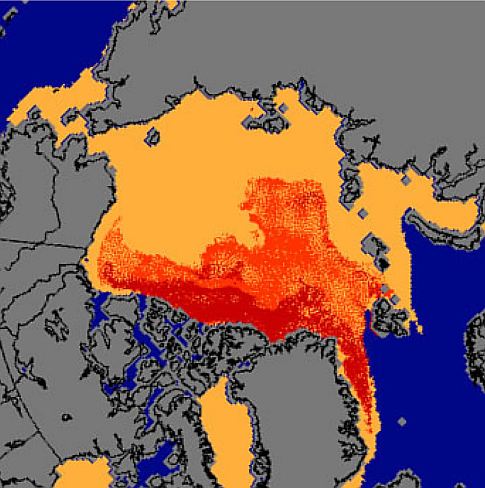 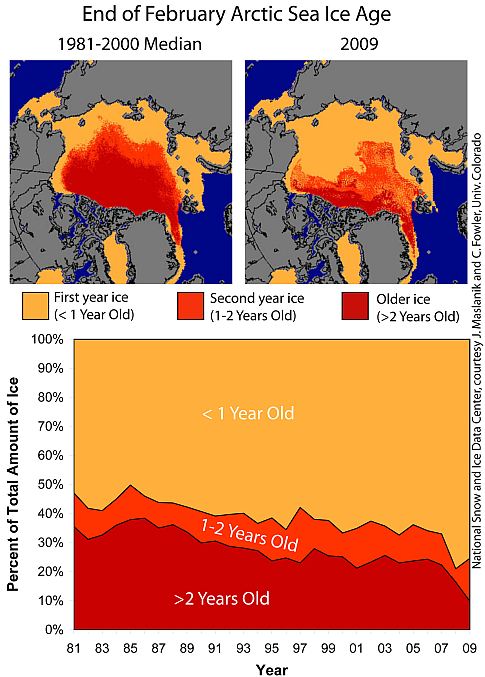 If you’ve been following the status of Arctic sea ice for the past few years, hearing scientists herald the potential coming of an ice-free Arctic summer may sound like old news. But according to researchers at NASA and the National Snow and Ice Data Center (NSIDC) in Boulder, Colo., this year, sea ice at the top of the globe may be even more vulnerable to melting than in the past.

Each winter as the sun sets for several months and temperatures begin to plummet, the Arctic ice cap grows, reaching its maximum extent in March. The melting season then begins, with the ice minimum extent occurring in September.

But all sea ice is not created equal. Multi-year ice is sea ice that has survived at least one melt season and is typically 2 to 4 meters (6.5 to 13 feet) thick. First-year ice, on the other hand, has accumulated over only one season and is much thinner. As the 2009 melt season begins, satellite data show that the Arctic Ocean is covered mostly by first-year and second-year ice, which means the thin ice is less likely to survive the coming summer. “As the ice cover in the Arctic grows thinner, it grows more vulnerable to melting in the summer,” Meier said.

The maximum sea ice extent for winter of 2008-09, which was reached on February 28, was 278,000 square miles less than the average extent for 1979-2000 and represented the fifth lowest maximum ice extent on record. Although the ice extent is important, Meier says ice thickness is the best overall indicator of Arctic ice cover health.

In 2008, a research team at NASA’s Jet Propulsion Laboratory developed the first map of sea ice thickness over the Arctic Basin. Using data from ICESat — Ice, Cloud, and land Elevation Satellite — the team is currently working on an estimate of ice thickness from 2003 to 2008, which will help researchers understand how ice cover is sensitive to climate changes.

“Sea ice decline is in response to a warming trend we’ve seen in the Arctic for the past 30 years,” said Meier. “We’re heading towards an Arctic that won’t have any summer sea ice in 20-30 years — the most recent research indicates that the last time that happened was at least 5,500 years ago.”

To add to the bleak sea ice news, satellite imagery revealed this week that an ice bridge connecting the Wilkins Ice Shelf on the Antarctic Peninsula to Charcot Island disintegrated sometime between March 31 and April 6. Although the ice bridge is not made of sea ice, its collapse dramatically underscores the impact of climate change on both Antarctica and the Arctic.