Two weeks ago, it was a 25-mile-long span of solid ice; now it's a massive flotilla of icebergs 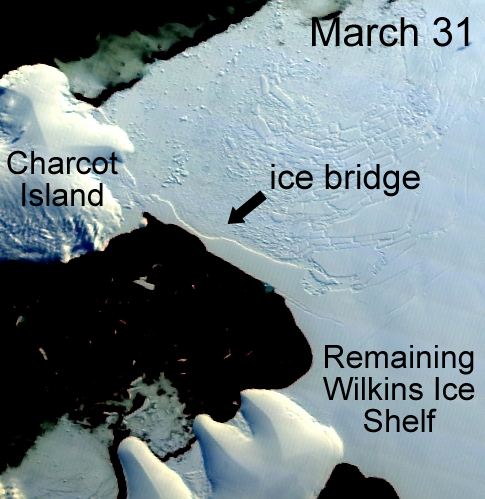 A 25-mile-long ice bridge that linked the Wilkins Ice Shelf to Charcot Island on the Antarctic Peninsula has collapsed. NASA satellite imagery shows that the bridge’s disintegration occurred sometime between March 31 and April 6. Scientists had been keeping a close eye on the bridge since last March, anticipating its collapse following dramatic changes that have taken place on the Wilkins Shelf in recent years.

The Wilkins Ice Shelf first began to break up in the 1990s, and in 2008 it underwent three significant breakups. From the early 1990s to 2008, the total area of the Wilkins dropped from 6,700 square miles to 4,000 square miles, following a pattern of ice shelf instability that has occurred on the Antarctic Peninsula in recent years. Then last March, the Wilkins suddenly lost 160 square miles in a dramatic retreat.

Ice shelves are thick slabs of ice that extend from coastlines out over the ocean. Because they are exposed to both warm air and warm ocean water, they tend to respond more rapidly to rising temperatures than ice sheets or glaciers do. The loss of the ice bridge will now unleash a mass of large ice fragments and icebergs that will drift into the Southern Ocean.

During the past several decades, the northernmost ice shelves on the Antarctic Peninsula have retreated dramatically, and scientists believe the changes are in response to atmospheric warming in the region. The most dramatic changes have taken place on the Larsen Ice Shelf, which is divided into regions A, B, C, and D. In January 1995, about 580 square miles of the Larsen A suddenly disintegrated into small icebergs. Then in 2002, satellite data captured an even larger collapse when 3,250 square miles of the Larsen B disintegrated — releasing about 720 billion tons of ice into the Weddell Sea.

Because an ice shelf acts as a barrier between glaciers and the ocean, the loss of a shelf can permit glaciers to start flowing into the ocean at an accelerated rate, which can contribute to sea level rise. Following the loss of the ice bridge, researchers are carefully monitoring the Wilkins Ice Shelf to see if any additional breakup occurs.