Now that scientists agree that humans have profoundly changed the Earth’s climate, many have begun asking if we can use... 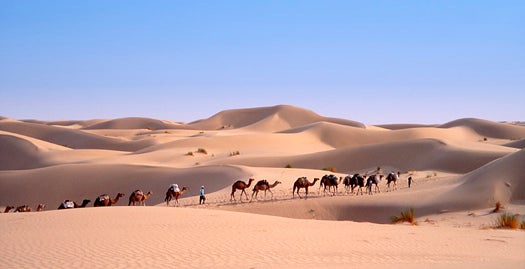 The desert is an ocean in which no oar is dipped. via Sahara Met
SHARE

Now that scientists agree that humans have profoundly changed the Earth’s climate, many have begun asking if we can use our globe-altering power to simply change it back. Geoengineering, essentially terraforming on Earth, has been floated as a cure for global warming a number of times over the past year, but now some scientists have published a plan to transform a part of the Sahara desert into a lush forest, and in the process, absorb enough carbon to offset the world’s current fossil fuel use. The catch: it will cost $2 trillion a year, and possibly destroy the Amazon jungle while unleashing giant swarms of locusts across Africa.

Writing in next month’s issue of the journal Climatic Change, Leonard Ornstein, a cell biologist at the Mount Sinai School of Medicine, and David Rind and Igor Aleinov, researchers at NASA’s Goddard Institute for Space Studies, lay out a plan to pump desalinated seawater from the coast to the desert. The pipes, buried underground to avoid loss to evaporation, would irrigate fields of Eucalyptus grandis. As the trees take root, they will replenish the soil and cause more rainfall, allowing for even more growth. The researchers estimate that as the forest grows, it will fix 8 million tons of atmospheric carbon, equivalent to the total emissions of the planet today.

Of course, there might be a few side effects. For one, sand from the Sahara is carried into the air, across the Atlantic, and deposited in South America. The rich dust that falls from the sky, and the rain storms caused by that dust picking up moisture during it’s transoceanic journey both fertilize the Amazon rain forest. No desert, no dust. No dust, no rain forest. During that journey, the dust also feeds a variety of sea life.

Plus, the rain could cause massive swarms of locusts. Currently, wet years in the Sahara trigger serious population spikes of the destructive insects. With a permanent forest and heavy rain every year, Exodus-level clouds of locusts could spread across the entire continent.

And did I mention this would cost $2 trillion a year?

There is no doubt that global warming is a clear and present danger, and geoengineering may be part of the solution to that problem. But I think this is one case where I have to agree with the inevitable comments and say this cure sounds worse than the disease.