He lured the ocean’s premier coal-mine canary into captivity 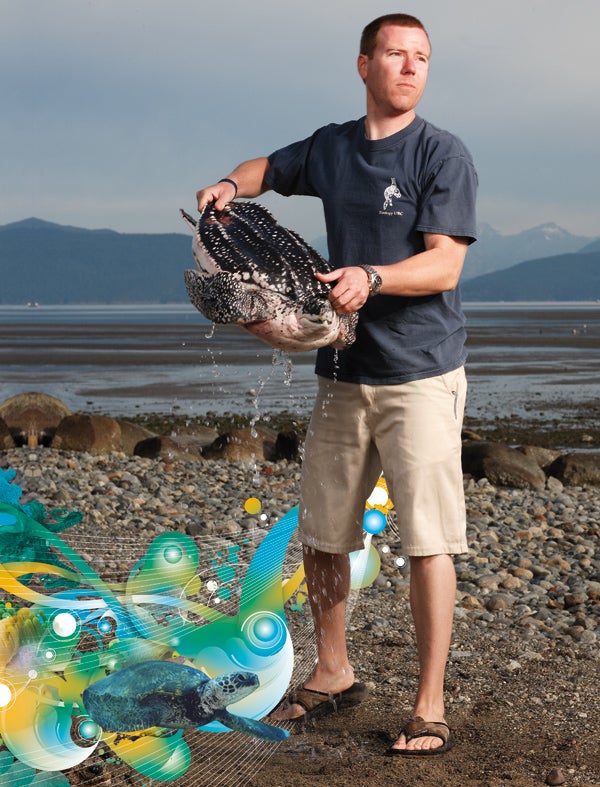 Word spread quickly that Todd Jones, a young doctoral candidate in zoology, had something fantastic in the blue tanks of his lab at the University of British Columbia. The attraction was juvenile leatherback sea turtles, about the size of garbage-can lids. Why the attention? Not some exclusive claim to scarcity—leatherbacks are critically endangered, but so are other species of sea turtle. Not their size—these juveniles were pikers compared with adult leatherbacks, whose noon shadow can be almost the circumference of a Volkswagen Beetle. No, it was the simple fact that they were here, alive.

Almost no one had seen a juvenile leatherback before. Between the scurry of hatchlings down the beach until their return decades later to nest, leatherbacks simply vanish into the open seas, where this species as old as the dinosaurs undertakes one of nature’s great ultramarathons, swimming thousands of miles from ocean to ocean. Because leatherbacks travel so far, anything that disturbs the balance in any marine environment anywhere—from overfishing to global warming—affects the turtles and leaves a readable print in them. “They really are the poster species for the health of the world’s oceans,” Jones says.

The trouble was, little was known about leatherbacks because nobody had been able to raise them in captivity. Enter Jones, a Florida native whose background in both animal physiology and conservation issues provided a useful nexus of expertise and perspective. To simulate the turtle’s natural diet of huge quantities of jellyfish, for example, he created a substitute he called “squid Jell-O,” which was hand-fed to the leatherbacks.

A signal, poetic trait of leatherbacks is that “they can’t comprehend barriers,” Jones says. Their universe is uncontained. Put them in a tank, and they will ram the wall repeatedly until they die. So Jones invented a Jolly Jumper–like harness made of rubber tubing that suspended the leatherbacks in the middle of the tank, free to swim and dive but touching nothing. The turtles accepted the illusion that they were in the open sea. “People ask me, ‘When did they get used to the tank and stop swimming?’ ” Jones says, “and the answer is: never.” For three years they swam on, those big flippers churning slow figure eights. Jones and his research partners were the first to uncover how much food leatherbacks must consume, how quickly they grow, and when they reach sexual maturity. Because until we understand how the leatherback lives, we won’t be able to stop what’s killing it.