Beneath Saudi Arabia’s blazing sun, the largest greenhouse ever planned is taking shape. It will take visitors on a walk through Earth’s history—and into its future

A Stroll through Botanic History

The crescent-shaped greenhouse at King Abdullah International Botanical Gardens, rendered here, will be the size of 15 football fields, making it four times as big as the world’s current largest greenhouse.

It’s hard to imagine it raining in Riyadh. Less than five inches of water fall from the clouds above Saudi Arabia’s capital city each year. When the thermostat rises above 110°F, it’s not a heat wave—it’s midday. But it wasn’t always like this. A little over three million years ago, before climate-change cycles turned the area into a desert, the Arabian Peninsula’s empty riverbeds were overflowing valleys, and its dry expanses of shrubland were lush grasslands.

Until now, Riyadh’s verdant past was confined to the pages of textbooks. Today, that history is coming alive. In 2006, the city sponsored an international competition to design a botanical garden as a gift to Saudi Arabia’s recently-anointed leader, King Abdullah. The winning design, a joint venture from British architecture and engineering firms Barton Willmore and Buro Happold, will explore the region’s plant life through the ages, taking visitors on a walk millions of years back in time.

Set to open in 2011, the ambitious King Abdullah International Botanical Gardens will attempt to display the diverse array of the region’s plant species throughout the past 400 million years in its “paleobotanic” greenhouse. And, as if helping visitors peer into the past isn’t enough of a challenge, the garden will also explore the land’s potential future. The designers hope to educate visitors about the process and consequences of natural-resource depletion and human-wrought climate change as well as the benefits of
preserving Earth’s bounty.

At the heart of the $200-million project is what will be the largest greenhouse in the world. Spanning 20 acres and shaped like two interlocking crescents—a symbol of Muslim faith—the garden will lead visitors through six geological time periods, starting with the Devonian, when life on land was just developing, and ending with the Pliocene, when the Arabian Peninsula was brimming with dense grasslands and gushing rivers. Extinct flora—from the horsetail tree to the leafless Rhynia to the Medullosa shrub—will be represented with models and closely related modern species. (Outside the greenhouse, guests can view a smattering of exhibits, fountain areas and tree mazes at the scientific, “wadi” and water gardens.)

The seventh area of the greenhouse, called the “Garden of Choices,” makes plants political. This area will take visitors on two paths to the future. 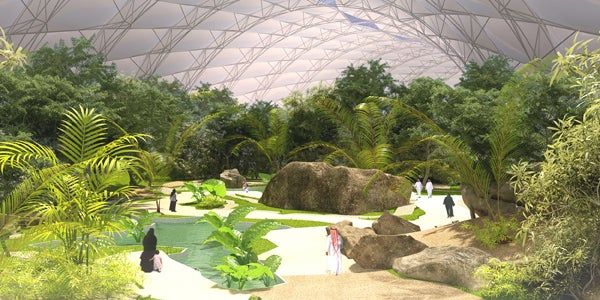 The greenhouse’s Teflon roof will keep the air inside cool.

The “Do Nothing” path symbolizes Earth’s future if we continue to deplete resources and ignore carbon dioxide emissions. As visitors climb through the path, the temperature rises and the vegetation becomes more sparse, transforming from leafy trees and shrubs to vines and creepers. The path ends with a small platform of charred land.

Dreary, yes, but the hilltop will also give visitors a view of a hopeful alternative: the “Do Something” garden, which will display steps we can take to protect our planet. This path’s rock-lined corridors will contain stations like “Choices at Home,” an area promoting native species. Another station, “Choices in the Community,” will focus on sustainable energy. Guests will view a model of Riyadh that is surrounded by wind and mirror array farms; the push of a button will reveal how much of the city can be lit up by using these alternative energy sources.

The sustainability theme will continue in the “Choices for Energy and Construction Crops” station, which focuses on novel uses for plants. One way to reduce the world’s carbon
dioxide emissions is to replace coal and oil—Saudi Arabia is the world’s largest producer of the latter—with biofuels. One promising alternative the station will highlight is Jatropha curcas, a fruit tree native to Mexico and Central America that also grows in Asia and Africa. Biofuel made from jatropha seeds can be burned in most unmodified diesel engines. With their 40 percent oil content, jatropha’s seeds boast high yields of fuel: 2,226 gallons of oil per acre of crop, compared to corn’s 230 gallons of ethanol per acre. And, because the tree grows in dry, worn-out soil, it doesn’t compete with food crops.

The “Do Something” path will culminate in the ultimate reward for sustainable choices—a landscape modeled after a pluvial period 3.5 to 1.2 million years ago when Saudi Arabia was marked by great biodiversity and lush plant life.

Maintaining a botanical garden in the desert is no easy task. With all the talk of sustainability, what is the best way to make the gardens themselves sustainable? The biggest issue is how to keep the greenhouse’s interior cool and moist while conserving energy. To do so, the ceiling’s highest parts will be arch-shaped. These arches will capture the heat 120 feet above the ground and keep it there. Cool air will remain at the bottom of the structure, greatly reducing the need for air conditioning. The roof, which will be the largest Teflon structure in the world, will limit the amount of light and heat in the garden.

Solar mirrors and panels will produce most of the energy needed for cooling, transportation and machinery. Two methods are in the works. The first uses mirrors to reflect the sun’s rays onto a man-made pool of water, turning it into steam. The steam then powers a turbine attached to a generator. The second scenario involves a traditional solar array to supply electricity in the summer months.

Water poses another challenge. Treated sewage, ground water and recycled on-site drainage will supply the 400-acre gardens and the greenhouse. Evaporation, a common enemy of water conservation, is being tackled too. Because all of the air inside the greenhouse—even the hotter air trapped near the ceiling—will be maintained at a temperature that’s much cooler than the outside environment, the evaporation rate will be somewhat low.

In the coming years, construction and maintenance of the botanical garden will no doubt present new challenges. If the designers of this giant desert greenhouse continue to find sustainable solutions, the rest of the world just may take notice. 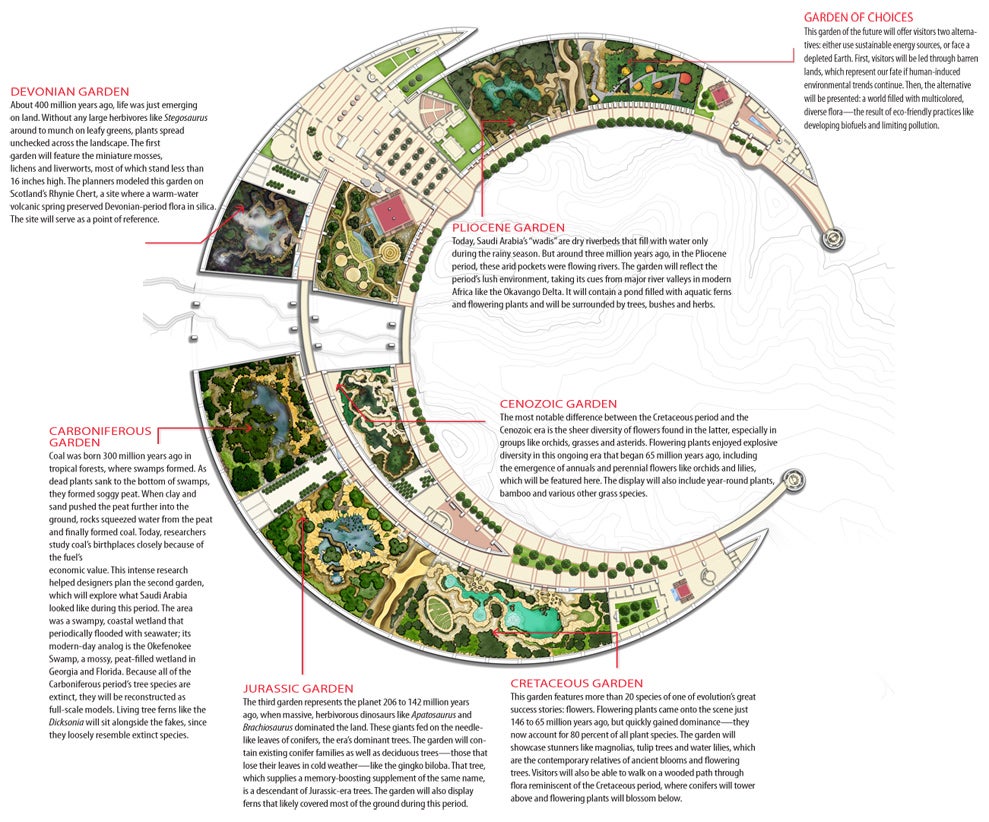 Inside the World’s Largest Greenhouse

The paleobotanic gardens housed inside the greenhouse display flora from six ancient geological time periods, plus one garden of the future. The designers consulted scientists from the Natural History Museum in London to map out the plants for each time period. Extinct species are depicted with models and closely related living plants. Click here to blow up this image.
Conservation
botany
greenhouse
nature
plants
science illustrated