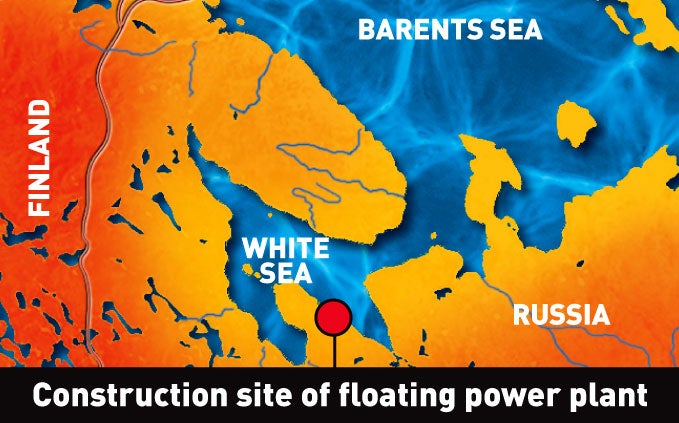 While the U.S. hems and haws over reviving nuclear energy as a less expensive alternative to oil, Russia has dug back 30 years in our nuclear history to find a solution for some of its own energy woes: the floating nuclear power plant.

Although the concept of a water-borne nuke plant might sound outlandish, it isn’t new, nor did it originate in Russia. Westinghouse Electric Company considered the idea in the 1970s and built an immense dry-dock facility in Jacksonville, Florida, where plants would be launched and floated north along the Eastern Seaboard, con- veniently doling out power to towns in need. Engineers would be able to standardize construction for multiple plants in an offsite factory with increased quality control and reduced production costs before tugging a plant to its port of call. But ultimately, says retired Westinghouse consultant Richard Orr, energy conservation following the 1973 OPEC oil embargo killed the project.

The Russian plan is to mount two reactors on a football-field-size barge, float it to a port, connect power lines to the mainland, and turn on the reactors, providing communities with affordable electricity. The plant will store waste and spent fuel in an onboard facility that workers will empty every 10 to 12 years during regular maintenance overhauls. After 40 years, the normal life span for a nuclear plant, the decommissioned plant would be towed away and replaced with a new one. The reactor and spent fuel would go to a storage facility, but the
barge could be recycled.

Yet because the safety of the Russian facility is still unknown, the prospect of resurrecting the Westinghouse idea in the White Sea has drawn protest from environmental groups such as Greenpeace and the Norwegian foundation Bellona. One concern is that a boat could ram the plant and spill waste into the water. An even bigger fear is that a nasty storm could cut the plant off from the land-based power supply required to run plant operations. Should emergency generators fail, says David Lochbaum, director of the Nuclear Safety Project at the Union of Concerned Scientists, a Chernobyl-like disaster could ensue. In a worst-case scenario, an overheated core could melt through the bottom of the barge and drop into the water, creating a radioactive steam explosion. Such a cloud could do far more damage than the plume of nuclear fallout kicked up by the 1986 explosion of the Chernobyl nuclear power plant in the former U.S.S.R., Lochbaum notes, because the human body absorbs radioactive water droplets more easily than it does radioactive ash. “Its worst day would be much worse than a land power plant’s,” he says.

Sergey Obozov, acting director for Rosenergoatom, says that reactors at sea have a proven safety record: The facility would be powered by two 60-megawatt KLT-40S reactors adapted from those already in use on three Russian nuclear-powered icebreakers. Yet Cristina Chuen, a Russian nuclear-energy specialist with the Monterey Institute for International Studies in California, cautions that subtle performance differences might arise when running the reactor for pure energy generation instead of propulsion, noting that the cooling system remains unproven. Although the technology exists to contain a burning core, Rosenergoatom won’t say if the plant-which was designed a decade ago-will include the most modern safety measures.

With a building permit in hand, Rosenergoatom aims to have the facility afloat in the port city of Severodvinsk in the southeastern White Sea by late 2010. “The Russians have learned a lot about safety from the U.S. Department of Energy, Sweden and Norway-who probably all wish [the Russians] would focus on things other than a floating nuclear power plant,” says Chuen, who adds that she wishes the planning process were more transparent. “Maybe it will turn out great, but I just hope they did all the research to make sure it’s safe.”

Floating nuclear powerplants? What?! That’s what Jonathan Coulton says too. Find out more on the PopSci podcast.