A Jetpack For Divers

Dive in and explore 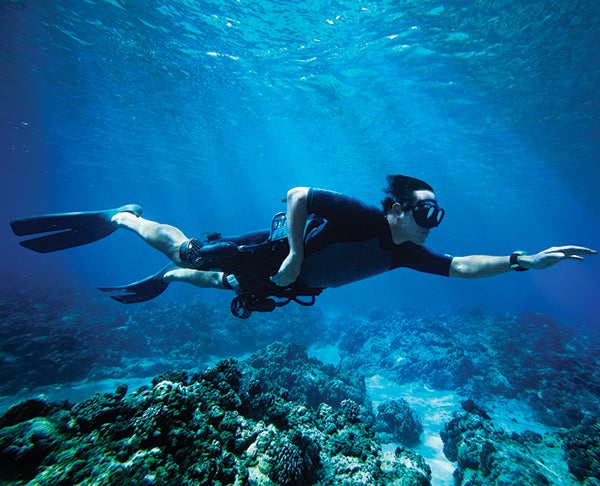 On a windless day on the west shore of Oahu, Hawaii, I strapped a pair of propellers to my legs, walked into the surf, and disappeared beneath the surface. Without a single kick, I was racing over the sand, cutting through the water at an Olympic pace. It felt more like flying than swimming. I struck a Superman pose and sailed into the abyss.

Designed for Special Forces divers, the Patriot3 Jetboots are unique among personal propulsion devices because they’re hands-free and provide sea-creature-like agility. The two propellers, which hang from a waist harness and attach at the thigh, can send divers to nearly four knots. A lithium-ion battery worn at the small of the back could last up to four hours.

With the Jetboots—sort of a misnomer given how they’re normally worn—I was able to swim circles around turtles, blend in with a school of fish, and scare the life out of two divers plodding through the shallows. I’m certain they heard my crazed laughter as I flew by. To steer, I’d adjust the tilt of my head or arch my back to roll like a seal. With gills, I’d probably never want to surface.

Although it’s made for the military, the system has a number of civilian applications. Scientists could use it to traverse large areas of coral reef or track marine life. Salvage divers and documentarians could maneuver while retaining full use of both hands (and achieving greater control than with tank-mounted propulsion systems). And recreational divers like me could explore more reefs, caves, and wrecks. Turns out, a simple harness with two propellers and a battery can enable entirely new ways to see the ocean.

Right now those views come at a high price: The system can cost tens of thousands of dollars. But Patriot3 says it plans to create a cheaper, recreational version as soon as this summer. It may have less power, battery life, and durability, but it will no doubt offer a dose of the same fishlike experience I had that day doing barrel rolls in Hawaii.