Frogs on the Verge of a Major Extinction 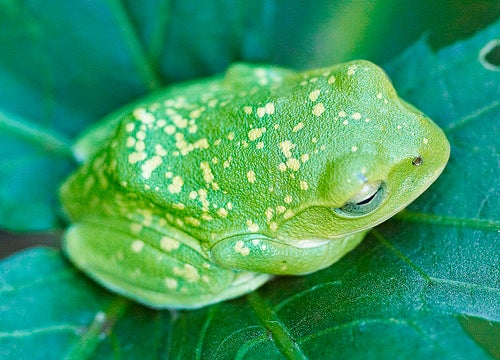 Lots of amphibians (a third to a half of all species) are dying, and their deaths are the breaking-edge of what many scientists are calling the first mass extinction since the dinosaurs checked out 65 million years ago, researchers say in a new paper published online in the Journal Proceedings of the National Academy of Sciences.

Scientists are not sure when this extinction crisis began—it could have started 10,000 years ago, or during the industrial revolution, or this century. But we are definitely seeing an extinction “spasm” right now, say the Berkeley scientists, especially among our clammy, froggy friends. This extinction is unlike the five that came before it, according to the paper’s authors from UC Berkeley, because it has nothing to do with any asteroid impact, or volcanic surge, or great sea cooling. Instead, it may have almost everything to do with us. Amphibians made it through last time, when the dinosaurs disappeared. But with new, people-driven pressures on biodiversity, the survivors are now some of the most vulnerable.

Almost 200 amphibian species have gone extinct in the last few decades alone, with several pressures adding to the crisis. One is a fungal skin disease called chytridiomycosis, which has been implicated in mass frog deaths in Central and South America, and is claiming species almost everywhere else on earth, according to the paper. Scientists believe the disease spreads on amphibians introduced by humans into new environments. Climate change is also implicated, possibly as a trigger for chytrid infections, but also as a force of its own. Many amphibian species are adapted to live only in a small temperature zone, and montane species are particularly vulnerable to temperature shifts that can shrink the small slice of mountainside they inhabit down to nothing.

Habitat loss is another important player, impacting 90 percent of the amphibian species the IUCN lists as at risk of extinction. Warming (and the weather changes that go along with warming) shrinks habitats, as does humanity’s constant bulging expansion over more and more of the earth. Research into treatments for chytrid is ongoing, with new results with beneficial skin bacteria, but with human-caused climate change progressing, and habitats shrinking, the papers authors close their report with the worry that we may not be able to make a dent in this latest mass extinction, and even if we can, we have very, very little time to do so.