Costs are down, interest is up, and the Stirling solar system is ready to flick the switch

The way Robert Liden sees it, his company is simply building an odd-looking car. It’s made mostly of steel and glass, after all, and it has an engine with a radiator and a water pump. It just doesn’t have wheels, seats or a Blaupunkt.

What it does have is a generator that can power up to eight homes. No, the device isn’t a car; it’s a Stirling solar dish, and Sandia National Laboratories in Albuquerque, New Mexico, has recently completed a mini power plant composed of six of Liden’s dishes.

The dish, made by Stirling Energy Systems in Phoenix, is the world’s most efficient solar generator. It uses an old principle–that concentrated light is a great heat source–to achieve a level of efficiency on par with conventional power sources and far higher than traditional solar cells. Instead of converting sunlight directly into electricity, as those familiar rooftop solar panels do, it uses a concave array of mirrors to focus light on a central point, where the resulting heat causes compressed hydrogen to expand, driving a four-cylinder engine that turns a 25-kilowatt generator.

Measuring 38 feet across and costing $250,000, this is no residential add-on. It’s meant for the opposite end of the power chain–that is, for utilities seeking extra juice for the grid, not for consumers hoping to reduce their household energy bill. Liden, Stirling’s chief administrative officer, says the company will install a 40-dish, one-megawatt demonstration project in California by early next year. Then, with manufacturing ramped up, Liden wants to get really serious, erecting a 20,000-dish facility somewhere in the Southwest to supply the region with 500 new megawatts, more energy than many nuclear or fossil-fuel plants crank out.

For decades, solar power has been hindered by high costs. Now, however, with coal-fired plants struggling to clean up their emissions, natural-gas plants beset by high fuel prices, and nuclear plants still anathema because of disposal woes, people are reexamining the solar option. The energy source has gotten steadily more affordable, and the U.S. Department of Energy says that solar-dish power could be cost-competitive with conventional sources by 2011.

The concept behind the solar dish dates back to 1816, when Scottish engineer Robert Stirling invented a workable alternative to the explosion-prone steam engines of the day. His version was fueled by wood, not light, and produced mechanical power, not electricity, but his closed-cycle regenerative gas engine is at the heart of the Stirling solar system.

If dish power catches on, it will boost the nation’s lagging solar industry, which now generates less than 1 percent of the total power supply. Sandia engineer Chuck Andraka says the dish’s modular appeal (you can chain together as many as you want) reduces the amount of start-up capital needed for commercialization. But, he adds, the price per dish needs to fall below $50,000 to be cost-effective.

Once that happens, dish power could become the go-to stopgap source during periods of high daytime demand, especially during the summer months, when air conditioners strain the power grid. “The U.S. has plenty of baseload power,” Andraka says. “It’s the peak that we’ve got to worry about.” 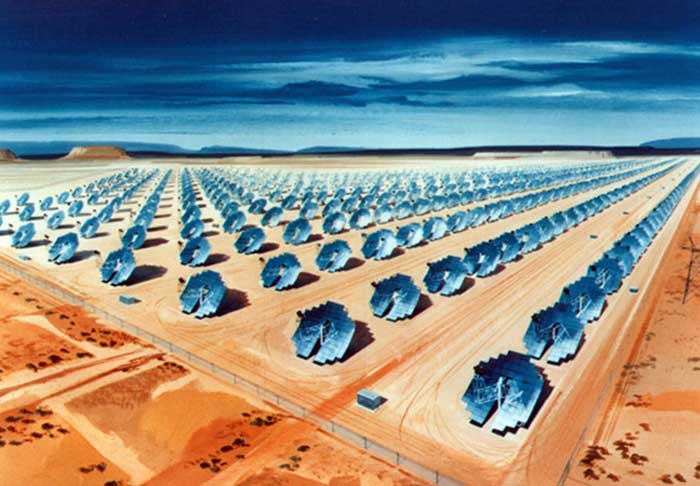 A 10,000-square-mile farm could meet the energy needs of the entire country. 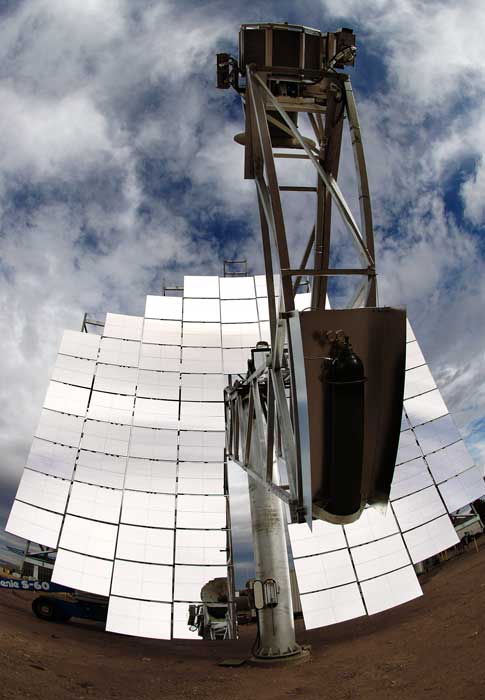 One of six prototype solar dishes installed near Albuquerque by Sandia National Laboratories. The plant will produce up to 150 kilowatts of grid-ready electrical power.
natural gas plants
sandia national laboratories