This giant demon plant gives you burns if you touch it, and it’s spreading

The name "giant hogweed" should give you a clue as to how horrible this plant is. 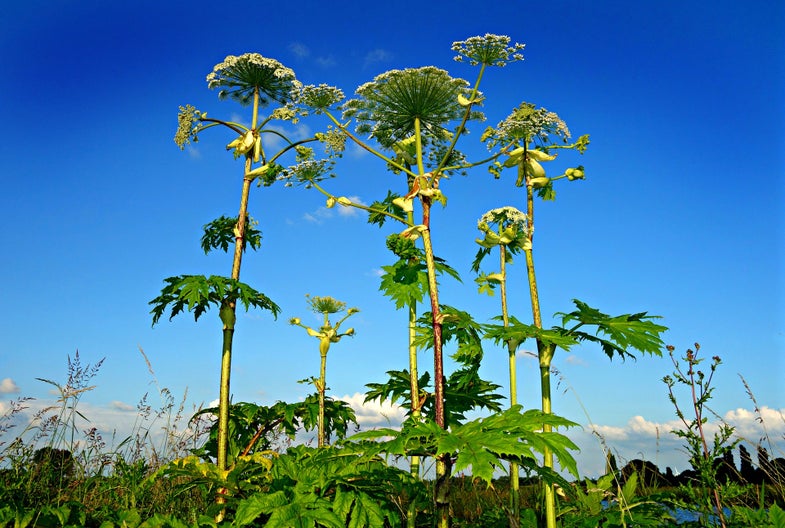 “Giant hogweed” already sounds like a thing you should avoid. You’ll definitely want to steer clear once you see the burns the plant can give you—yes, you read that right, burns from a plant. (We won’t paste them in for your sake, but click here if you’re curious.)

This horrifying nightmare of a plant mostly grows in the northeastern part of the U.S., but recently it’s been spreading. Folks recently found a patch of giant hogweed in Virginia, considerably farther south than the plant has crept in the past. Unlike many other invasive species, it’s not just harmful to the environment—it’s directly harmful to humans.

The demon plant otherwise known as giant hogweed isn’t physically hot, and doesn’t even contain a chemical that causes an immediate burn. It hurts you in a more sinister way. Giant hogweed releases a sap containing chemicals called furanocoumarins, which sensitize human skin (as well as that of many other animals) to sunlight. And we’re not just talking about a little extra redness if you stay out in the sun all day—we’re talking probably the worst sunburn you’ve had in your life (seriously, go look at those pictures). The reaction depends a lot on how much sap you get on your skin, how much you’re sweating, and how hot the day is (moisture and heat make it worse). Within 15 to 30 minutes of contact with the plant, you’ll start to feel the reaction, and then you’ll keep burning for another couple hours. The burns can be so severe that it takes months for affected skin to heal fully.

Furanocoumarins are so effective at giving us sunburn because they basically act via a similar mechanism. Sunburns are our skin’s reaction to getting DNA damage from ultraviolet radiation in sunlight. This is why severe sunburns give you peeling skin—the cells are dying from the genetic damage they’ve suffered, and as they die they flake off. Furanocoumarins react with DNA when under UV-A radiation, and are able to produce a bunch of cross-links between DNA bases that shouldn’t be there. These linkages prevent the normal cellular machinery from accessing genetic information the cell needs to continue living, and though it’s possible to repair some cross-links, the cell will probably die. All that cell death produces a lot of inflammation and activity as your body ferries away bits of waste and regrows missing parts of your skin, which is where all that redness and irritation comes from.

Giant hogweed is a particularly nasty example of furanocoumarins at work, but it’s not the only one. Limes also do it. So do grapefruits and carrots and several other fruits and veggies. They all just do it to a much lesser degree. But if you’re a person who handles those kinds of produce a lot, like bartenders who handle limes daily or workers picking celery, you may find that you develop a rash—that’s the furanocoumarins at work.

It takes a lot of produce handling to give you any kind of rash, but just one brush against a giant hogweed plant can give you a serious burn.

It is possible to stave off most of the reaction if you realize you’ve come in contact with one of the plants. The New York State Department of Environmental Conservation recommends that you wash the whole area with soap and cold water (remember that heat makes it worse!) and stay out of the sunlight for 48 hours. If you do get a reaction, see a doctor—they might recommend a topical steroid that can help. Here’s the kicker, though: you may also have to keep the affected area out of sunlight for a few years—apparently the reactivity can stick around for that long. So if you got it on your hand say hello to summertime gloves as your new go-to accessory.

The best thing to do is to avoid giant hogweed in the first place. In the U.S., growth is mostly confined to the northeast (and, as of recently, Virginia), but it’s also been spotted as far west as Oregon and Washington. It’s an invasive plant, having been brought over to North America as a decorative garden ornament. To be fair, it is quite striking. But let that be a tool to identify it, not a reason to plant it in your yard.

Giant hogweed can grow to be anywhere from 7 to 14 feet tall (yes, seriously) and has umbrella-shaped clusters of white flowers that can be up to 2.5 feet across. Individual leaves can be 5 feet wide. The real tell-tale sign is the stem, which is covered in purple splotches and thick, white hairs. Unfortunately there are lots of plants that look a lot like giant hogweed, mostly because other hogweed plants have a similar look. Some of the relatives also have furanocoumarins, so you should steer clear no matter what, but to tell the difference it’s often best to look at the stem and the flower clusters. The flowers should grow in a rounded shape rather than with a flat top, and there should be many tiny flowers rather than about a dozen larger ones. There’s a complete guide here as well.

If you spot the plant, don’t try to remove it yourself. Call your state’s department of conservation and let them do it safely. To fully get rid of the plant you need to take out the whole root and make sure you don’t accidentally spread any seeds, on top of avoiding the sap, so it’s best left to the professionals.