Video: New ZeroTouch Interface is a Touchscreen Without the Screen

At the Computer Human Interaction conference in B.C. this week, a team from Texas A&M University unveiled a touch screen... 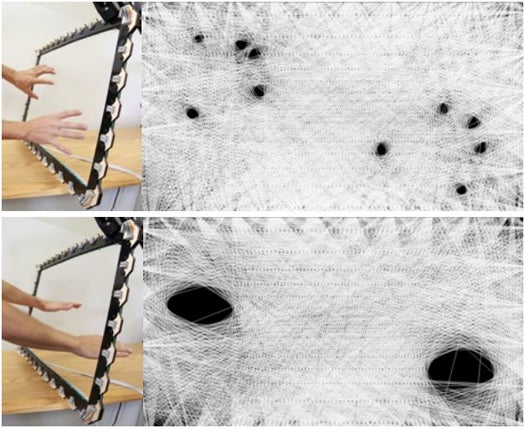 At the Computer Human Interaction conference in B.C. this week, a team from Texas A&M University unveiled a touch screen technology they’ve been incubating for a couple of years that isn’t really a screen at all. ZeroTouch, as the project is known, is more like an empty picture frame lined with LEDs and filled with criss-crossing beams of infrared light. Like a mashup of traditional 2-D touch interface with the 3-D applications of, say, Microsoft’s Kinect, its applications are many.

The design seems so simple that it’s almost surprising we haven’t seen something like this until now. ZeroTouch is basically an empty window pane, and the LEDs and IR sensors mounted around its edges detect anything that crosses the plane of that frame (it can recognize up to 20 independent touch points at a time). It doesn’t just register that something is there, but also the size of the object–whether it’s a finger, an entire hand, a tiny stylus, etc.–and whether it is rotating or twisting (this is better explained visually in the video below).

Since ZeroTouch allows a user not only to touch but to reach through the “screen,” it opens itself to numberless applications. Laid on a flat surface, it can be used as a drawing board or a drafting stylus. Placed over any conventional screen, it instantly and inexpensively turns it into a touch screen. Or it can be suspended in space so the user can actually reach through it, offering it a 3-D capability that other touch screen interfaces lack.

So far, such 3-D applications haven’t really been exploited beyond a pretty straightforward painting program, but the possibilities are there. The Aggies behind ZeroTouch next plan to create a layered device wherein multiple screens are stacked atop one another, giving it a greater degree of depth of control.

See it work in the IDG report below.