For a team of technology whiz kids at the University of Groningen in the Netherlands, having a 3-D theater to... 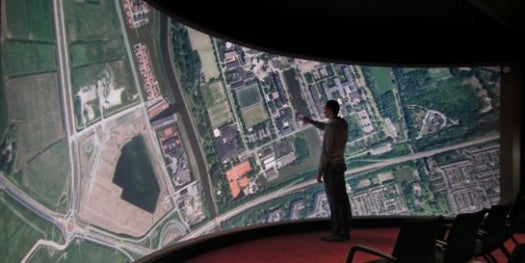 For a team of technology whiz kids at the University of Groningen in the Netherlands, having a 3-D theater to work in just wasn’t enough. Using the curved 33-by-9-foot 3-D screen, a group there has created a touchscreen capable of more than 100 points of simultaneous contact.

To create their super-sized touch panel, the team converted the 3-millimeter dark acrylic screen panel into a touch screen by backlighting it with six full HD projectors. The rest of the hardware isn’t particularly high-tech; to create the touch sensitivity they used six Optitrack cameras, 16 inexpensive infrared emitters, and 1,000 LEDs.

Three computers (described by the team as “old”) are connected to the cameras (two cameras per computer) and feed data to the visualization system running on a fourth computer. Even with the old computers, they have enough processing power to detect 100 points of contact simultaneously with no delay. More points of touch are possible but the program starts to slow at that point, a problem that seems like it could be fixed with some better hardware.

See it work in all of its touch-sensitive glory below, scored to a soundtrack that Tim Burton would be proud of.