Video: How MIT’s Laser Camera Can See Around Corners

Back in late 2010, MIT Media Lab announced that it was working on technology that would allow a camera to... 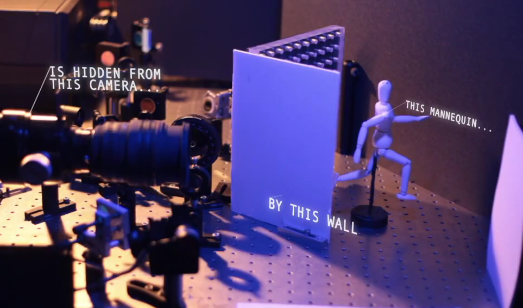 Back in late 2010, MIT Media Lab announced that it was working on technology that would allow a camera to see around corners and image objects that were never in its direct line of sight. Now, the lab has released a video explaining exactly how they do this and showing the technology in action.

Briefly, the system works by firing rapid femtosecond laser pulses–pulses so short they are measured in quadrillionths of a second–at a surface opposite the obscured object it is trying to image, like the wall opposite a doorway for instance. The laser light bounces off the wall and scatters. Some of that light hits the target object and likewise scatters. And some of that light ends up bouncing back off the wall and finding its way back to the camera sensor.

That doesn’t give the camera sensor much light to work with, but because the femtosecond bursts are so quick and because the camera sensor takes measurements every few picoseconds–or trillionths of a second–it can gather a lot of data quickly. By moving the laser slightly each time it fires a burst, the light also enters the space where the target object is at various angles, helping to define the geometry of the object being imaged. The returning light from all of these bursts enables the camera to put together a strikingly good image of the object hiding around the corner. That could help rescue workers or military operators see dangers around the next bend, or help the automated automobiles of the future see around blind corners. All is explained in the video below, and there’s more detail (and another informative video) over at MIT News.