This new Microsoft Kinect hack might have the most appeal for the DARPA set. Researchers at the Hybrid Systems Laboratory... 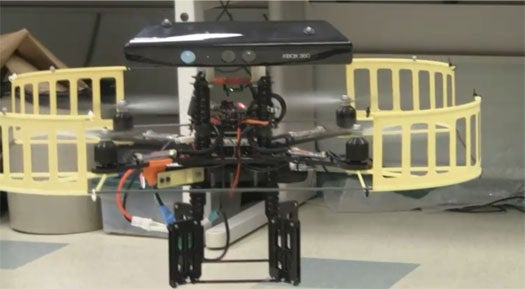 This new Microsoft Kinect hack might have the most appeal for the DARPA set. Researchers at the Hybrid Systems Laboratory at UC Berkeley mounted a Kinect sensor atop their Ascending Technologies Pelican quadrotor UAV, mapping the copter’s surroundings so it can avoid obstacles while traveling along a predetermined, programmed path.

The attached Kinect uses its sensor to map the room in much the same way as it maps the arrhythmically spasming limbs of a Dance Central player. That map, consisting of thousands of light points, is sent to a computer mounted on board, which runs an algorithm that fits a planar model to the points that represent the room, thus determining where the floor is. This model is fed into the controller as the sensed altitude, helping the quadrocopter determine its location and a logical path of travel. The whole process takes place autonomously on board the UAV.

Truly impressive is seeing the copter pause contemplatively when a new obstacle is introduced into its path; the video below shows the craft in action and lets you peek inside the system’s brain. Now, if they could just combine this quadrocopter with the Kinect’s proven stealth capabilities–well, I’m not saying we should be considering an army of Kinect-bots, but I’m not saying we shouldn’t, either.