The north magnetic pole is slowly sliding from its current locale in the far north of Canada toward Russia at... 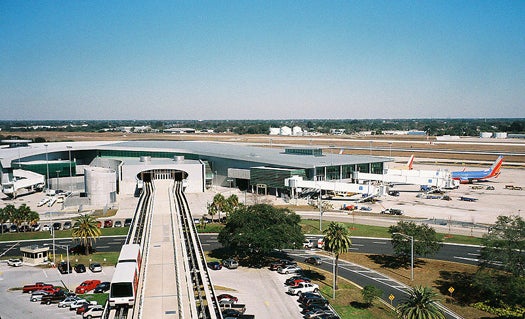 The north magnetic pole is slowly sliding from its current locale in the far north of Canada toward Russia at a rate of something like 40 miles per year, but most of us don’t feel the repercussions of that. However, far from the frosty Canadian tundra, sunny Tampa, Fla., is feeling the magnetic shift. Tampa International Airport has closed its primary runway until January 13 to repaint the numeric designators and taxiway signage to reflect the change.

Tampa’s busier runway, the west parallel runway, will be re-designated 19R/1L from its current designation of 18R/36L. Primer: the numbers represents the runway heading’s magnetic azimuth, so a designation of 18 denotes “180 degrees” from north (in this case, due south). The shift to 19 means the runway is now leaning ever-so-slightly west. (Since runways are often used in both directions, the R and L stand for left and right, and the second number represents the heading in the opposite direction, hence the difference of 18, or 180 degrees).

The Federal Aviation Administration is requiring the runway designations be changed to account for the shift in the north magnetic pole. When the west runway is reopened the east runway and the rarely used east-west runway will close to have their designations changed as well.