The strangely named Dalu Rebot Restaurant, in the northeastern Chinese city of Jinan, is a 100-seat hotpot restaurant with a... 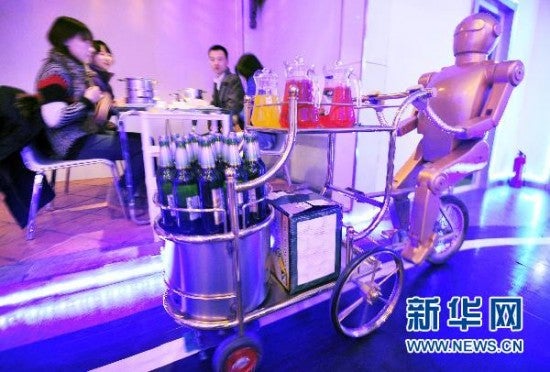 The strangely named Dalu Rebot Restaurant, in the northeastern Chinese city of Jinan, is a 100-seat hotpot restaurant with a very peculiar staffing choice: It features two robot receptionists and six robot waiters who wheel around drinks and food on large indoor pedal-driven carts.

The restaurant, which opened earlier this week, has a circular seating design with a track placed around the perimeter of the seating area. Even though the robot waiters have a built-in security system so they don’t run over people standing in front of them, the track seems like a smart way to avoid marauding cycle-bots crashing into steaming-hot hotpots while trying to deliver drinks. Hotpot, too, is probably a smart move, since there’s not a whole lot for a waiter to do besides bring drinks and accoutrements.

The Shandong Dalu Science and Technology Company is behind the robotic waiter initiative, ultimately hoping to have a staff of 40 robots. At the moment, the restaurant retains several token “organic” staff, who, you know, cook the food and stuff, but since the robotic angle is getting lots of attention, why not play it up?