When Drones Go Rogue In Friendly Skies, How Do We Bring Them Home? 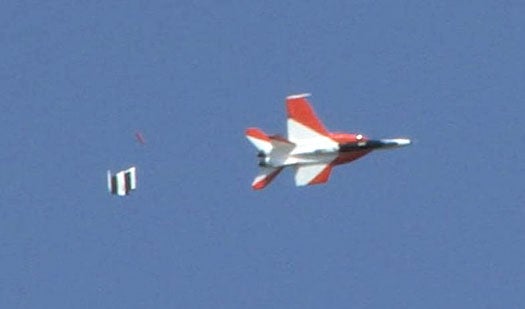 Word spread last week that a rogue MQ-8B Fire Scout copter drone entered restricted airspace just 40 miles shy of Washington D.C. after losing contact with its operators. The revelation occurred smack in the middle of AVUSI 2010, the world’s largest UAV tradeshow. And it served as a poignant reminder that all the game-changing technology on display here at the Denver Convention Center still has some innovating to do, especially when flight crews lose control of their unmanned craft.

But to lose control of a flying robot over a warzone is one thing; things get much more complicated in crowded domestic skies. One remarkable system, capable of bringing a plane missing most of one wing safely home, aims to make losing control a more palatable proposition.

Speaking generally about the issue of bringing UAVs into compliance with FAA rules, Lockheed Martin’s Bob Ruszkowski, a Skunk Works systems engineer, said, “I think we need to rise to the challenge rather than ask for forgiveness.” Then he posed a rhetorical question to underscore his point: “How many of those UAVs [in the convention center] do you see with a collision beacon? Or nav lights?”

Very few, in fact, but there were signs of such advancements.

The most dramatic evidence of technology that might clear the way for UAVs entering national air space was on display at the Rockwell Collins booth. Suspended from the rafters was a sub-scale model F/A-18 missing the better part of its right wing, which had been ditched as the plane ripped above Maryland’s Aberdeen Proving Ground as part of a DARPA-sponsored technology demonstration this summer. But the model didn’t crash.

It’s sounds improbable, until you see the video:

The plane is up and away, there goes the wing, and then… nothing that your gut grasp of Newton’s laws would lead you to expect: The craft shudders briefly, stabilizes, and then comes in for an astonishing, albeit a bit rough, landing. “We’re not defying physics,” insists Dave Vos, Rockwell Collins’ senior director of control technologies and UAVs. “As long as it’s physically possible to put the airplane in some configuration, attitude, velocity and orientation to recover some degree of control, we can do it.”

The technology, called Damage Tolerance Control, consists of a palm-sized box stuffed with sensors and advanced algorithms that taps into a plane’s existing avionics. It exploits the fact that flight control systems are exponentially more capable to counteract in-flight damage than a human pilot. With all due respect to Sully, a craft’s electronics can move its flaps in configurations you could never imagine in the 2 milliseconds available to compensate. Rather than diagnosing the problem, Damage Tolerance Control reacts instantaneously and automatically when it senses a dramatic change in trajectory, adjusting an aileron, say, and cheating the nose to the left to remove drag from the intact wing to keep the craft from whipping into a death spiral. “If you step off your front porch and your leg buckles, you don’t have time to diagnose it,” Vos says. “You catch yourself and worry about your knee later.”

The system will be tested in a UAV currently flying missions in Iraq and Afghanistan. Vos won’t say which one, but according to a spokesperson for General Atomics Aeronautical Systems Inc., it’s not the Predator or Reaper. If the system works as advertised, the improved survivability of mid-air damage would be a boon to the military, which under new budgetary restrictions can’t afford to waste resources.

But on the civilian side, improving the reliability of UAVs with a system that automatically lands the craft if something goes wrong is a significant step toward proving that unmanned planes could one day coexist with manned ones. “Once people start believing it’s possible, it’s going to happen really fast,” says Vos.

Stay tuned this week for an in-depth photo report from AVUSI, the drone trade show