Quit now while you still can. 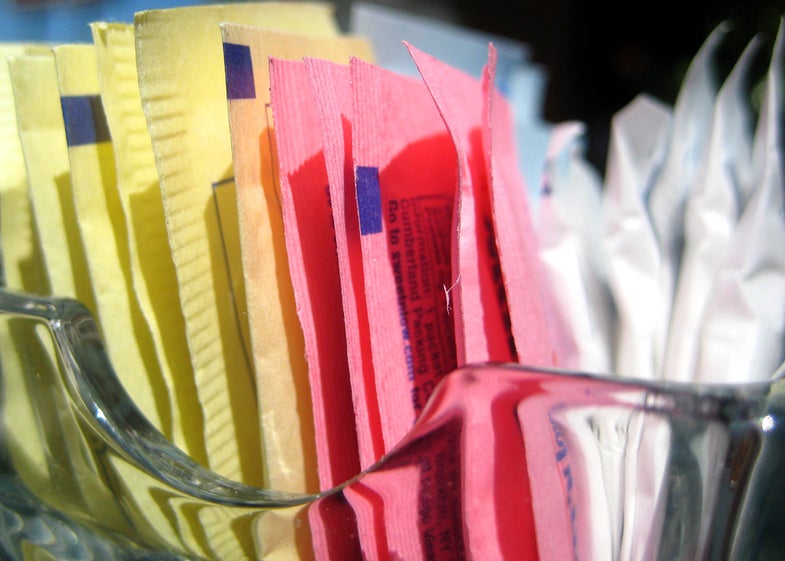 If you’re gonna call something “diet,” it should have to actually help you lose weight. But like dieting itself, diet foods don’t work as well in practice as they do in theory.

So put down that Coke Zero and listen up. Maybe you think the jury is still out on artificial sweeteners. Someone once told you they cause cancer. Someone else said they could help you kick your sugar habit. Yet another person claimed that only natural sweeteners are healthy, so you considered switching to stevia. Well, there’s good news and bad news.

The good news is that the scientific verdict on this stuff is actually pretty clear. The bad news is that none of those artificial sweeteners will help you lose weight. Oops.

This may be a revelation to you and that sanctimonious stevia sipper in your yoga class, but it’s not news to the medical community. Years of research has shown little benefit to switching from the real deal to a sugar-imitator. It’s just in the news now because of a meta-analysis published in the Canadian Medical Association Journal. A meta-analysis is basically when a group of researchers search for all the studies done on a certain topic and gather them to see whether there’s some overarching consensus. In this case, they searched for all the research about whether zero-calorie sweeteners helped people lose weight.

The vast majority of the studies they found were observational, so the quality of evidence isn’t great. Not to mention the few long-term, randomized controlled trials were sponsored by industry, which means they’re liable to be biased. But even with those issues, the preponderance of evidence says clearly and loudly that artificial sweeteners do not help you lose weight. Note: they also don’t give you cancer. So there’s that.

Some of the studies showed that those who ate non-nutritive sweeteners had higher BMIs and elevated risk for cardiometabolic problems. There are two ways to interpret that. One is through the lens of a relatively new idea that artificial sweeteners can change the way your body metabolizes sugars. There’s some evidence that if your body starts to learn that “sugary” things don’t contain calories, it could screw up your response to the real thing. But it’s also possible that people who eat artificial sweeteners tend to already have health problems. If you’re overweight or at risk of getting type 2 diabetes, you might switch to the supposedly healthier zero-calorie sweetener option. In a study that only observes the differences between sweetener eaters and non-eaters, it would seem that people eating the zero-cal option are contracting problems from the sweetener itself. But let’s all say it together: correlation doesn’t imply causation.

In a surprise third option, it’s also possible that people who eat non-nutritive sweeteners over compensate by eating more calories overall. If I drink a diet soda, surely I can have another scoop of ice cream. But surely you can’t. We see this phenomenon in exercising too: People who start to exercise to lose weight often overeat because they now have an excuse to eat more. If you do SoulCycle before brunch, you might feel like you earned an extra margarita—but that cocktail probably has twice as many calories as you actually burned listening to a peppy man on a bike tell you to pump it harder.

Look, sugar is just bad for you

This news shouldn’t be your excuse for switching to regular Coke: you should just try to get out of the sweet game altogether. Sugar, especially refined sugar, boosts your insulin levels and makes you an addict in much the same way that hard drugs can (though the effect is significantly counter-acted by other ingredients in many natural sources, like fruit). One soda a day quickly turns into one soda per meal, and soon anything that’s not sugary just tastes bad. Artificial sweeteners are no better. When given a choice between a hit of coke (no, not the soda) and some saccharin (you know it as Sweet-n-Low), cocaine-addicted lab rats chose the saccharin. The researchers literally could not give the rats enough cocaine to get them to choose it over the sweetener.

Humans probably can’t get addicted to sugar to quite the same extent. An addiction diagnosis in humans, whether it be to illicit drugs or food or sex, is a serious thing. It’s not just craving, it’s an inability to function without the thing you’re addicted to. Sugar and drugs both play into positive reward loops in your brain, but so does caffeine. You experience some “withdrawal” symptoms with all of them, but if you can get through the day without sugar you’re not actually addicted.

But don’t let the fact that you’re not a true sugar addict lull you into complacency. Sugar is not good for you and it does give you cravings. Kick the habit now and your body will thank you later.