Even dinosaurs couldn’t escape the sniffles 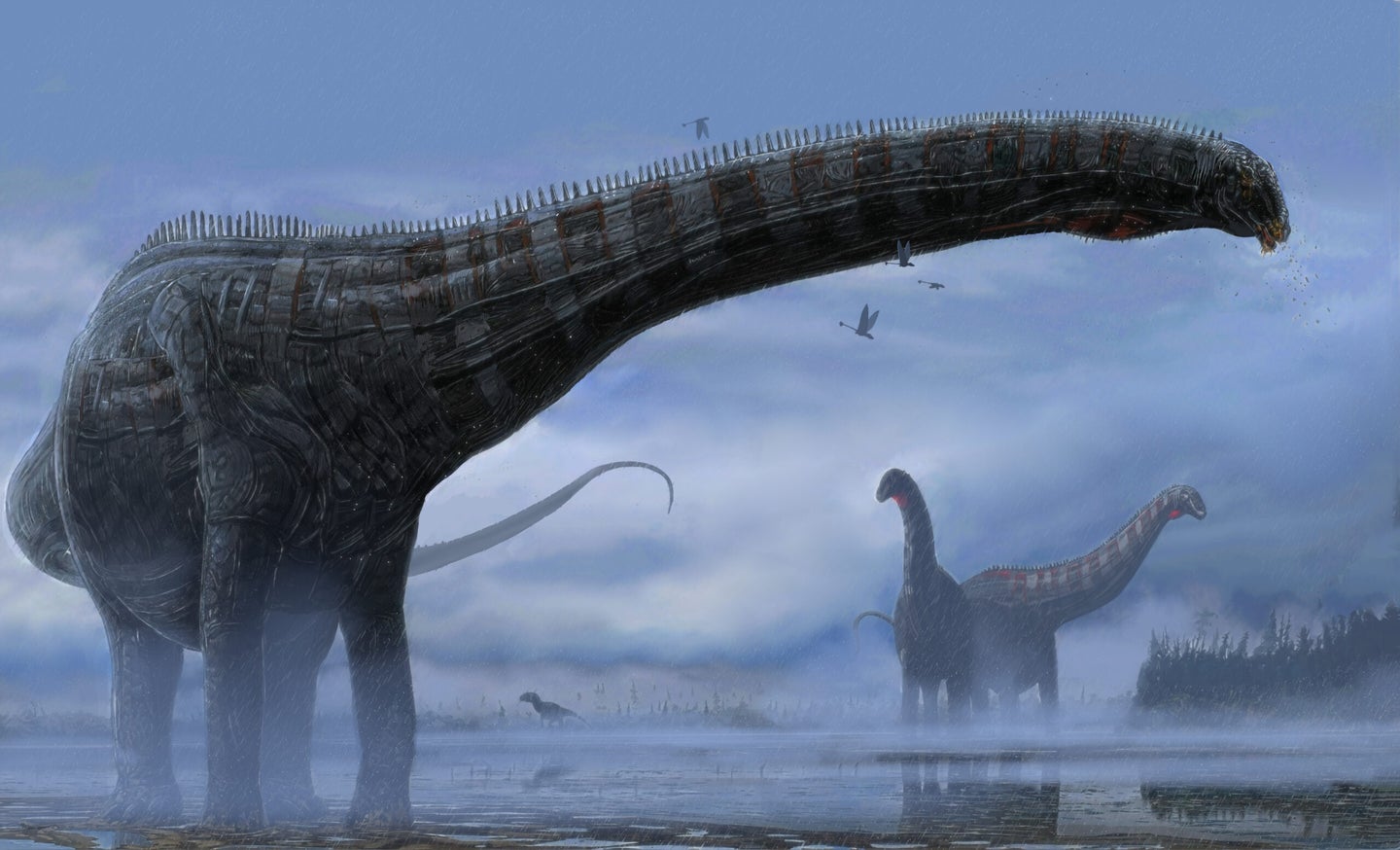 Around 150 million years ago, a long-necked dinosaur in southwest Montana became very ill. The unfortunate sauropod might have endured a sore throat, headaches, and difficulty breathing.

Although the dinosaur in question is long dead, signs of this sickness are preserved in its neck bones as lumpy growths. These abnormal structures may have been caused by a fungal infection similar to those seen in birds today, a team of paleontologists, veterinarians, and other anatomy specialists have determined. The growths represent the first evidence of a dinosaur respiratory infection and could shed light on certain aspects of dinosaur physiology, the team concluded on February 10 in Scientific Reports.

“I’ve looked at sauropods from all over the world and I’ve never seen a feature like this before,” says Cary Woodruff, the director of paleontology at the Great Plains Dinosaur Museum in Malta, Montana and a couthor of the findings. “It helps us understand the world that these dinosaurs were in—what kinds of illness and diseases plagued the tyrant lizards.”

Many of the ailments that struck dinosaurs are likely to remain a mystery because they left no trace on the bones. However, paleontologists have found fossil evidence of a host of maladies ranging from tooth infections to broken bones, arthritis, and cancer.

The dinosaur that Woodruff and his team examined was originally discovered in 1990 and nicknamed “Dolly” in honor of Dolly Parton. The fossil is similar in appearance to diplodocus, another long-necked herbivore that lived during the Late Jurassic. Dolly was probably between 15 and 20 years old when it died and reached a length of around 60 feet.

[Related: Duck-billed dinosaurs had the same bone tumors as people]

When Woodruff and his colleagues examined Dolly’s vertebrae, they noticed something odd.

Dinosaurs share numerous anatomical features with their living avian relatives and are thought to have breathed similarly to birds, he says. The respiratory system is more efficient in birds than mammals, with extra air sacs in the lungs and structures that penetrate into the bones. Dinosaurs also have sockets where respiratory tissue connects to the bone known as pleurocoels. “I like the analogy of a vacuum cleaner,” Woodruff says. “The respiratory tissue is like the hose, the bone is like the vacuum canister, and where that hose joins into the vacuum is the pleurocoel.”

Normally the bone in this region is very smooth. But in Dolly, the edges of pleurocoels on both the left and right sides of multiple vertebrae were knobbly and rough—a bit like a fossilized piece of broccoli. “Sticking out of it was this really gnarly, lumpy, irregular abnormal bone growth,” Woodruff says. “That was the smoking gun that this is not normal.”

To understand what might have caused the growths, he and his team searched for similar disorders among Dolly’s closest living relatives: birds and crocodilians. In crocodilians, the respiratory tract is “not as developed” as in birds, Woodruff says, and the respiratory tissue doesn’t pervade the bones. However, birds can develop respiratory infections that spread to the bone in the same location as Dolly’s lesions.

To narrow down the type of infection Dolly suffered from, the researchers took CT scans of the afflicted vertebrae. In modern birds, some respiratory illnesses cause rind-like growths to develop on the outside of the bone. But in Dolly, the scans suggested, the interior of the bones was also “really screwed up,” Woodruff says.

Unsurprisingly, no present-day ailments offered a perfect match for the ancient reptile’s growths. However, Dolly’s condition was most consistent with a very common infection called aspergillosis, which develops when birds, and humans, breathe in certain fungal spores.

By the time such infections reach the bone, they’ve already had plenty of time to wreak havoc on the lungs and associated tissues. Birds with aspergillosis often cough, develop fevers, and lose weight. If a sick bird doesn’t receive treatment, the disease can lead to deadly pneumonia, much as COVID-19 does in people.

All in all, Dolly would have felt pretty crummy.

“We can’t say if Dolly just keeled over because of this disease, or just being so visibly sick or on its own from the herd was an easy target for predators,” Woodruff says. “But we can say in one way or another it ultimately caused the death of this animal.”

While Dolly probably didn’t have quite the same disease seen in today’s birds, its bony growths support the idea that dinosaurs were susceptible to fungal respiratory infections and may offer insights about how their immune systems worked. “Mammals and birds have very different immune systems, so if we have this non-bird dinosaur that was breathing like birds and has a bird-like respiratory infection, odds are its immunological response was much more like a bird than mammals or other reptiles,” Woodruff says.

The findings open up a “whole new dimension” in our understanding of dinosaur diseases, while providing a new insight into the musculoskeletal system of sauropods, says Ali Nabavizadeh, a comparative anatomist and paleobiologist at the University of Pennsylvania School of Veterinary Medicine who wasn’t involved with the research. Dolly’s infection also reinforces connections between dinosaurs and modern bird anatomy.

“This paper provides yet another piece of evidence to show just how modern dinosaurs—the birds—are biologically so similar to their extinct non-avian dinosaurian relatives, even to the point of showing similar diseases,” he said in an email.

In the future, searching for similar lesions in sauropod vertebrae in collections around the world might reveal how prevalent respiratory infections were in these dinosaurs, Nabavizadeh said.

“I am excited to see how these findings can improve upon our knowledge of respiration as well as circulation in these breathtakingly enormous creatures.”