Tyrannosaurus rex had a bone-crushing bite with a force of 8,000 pounds 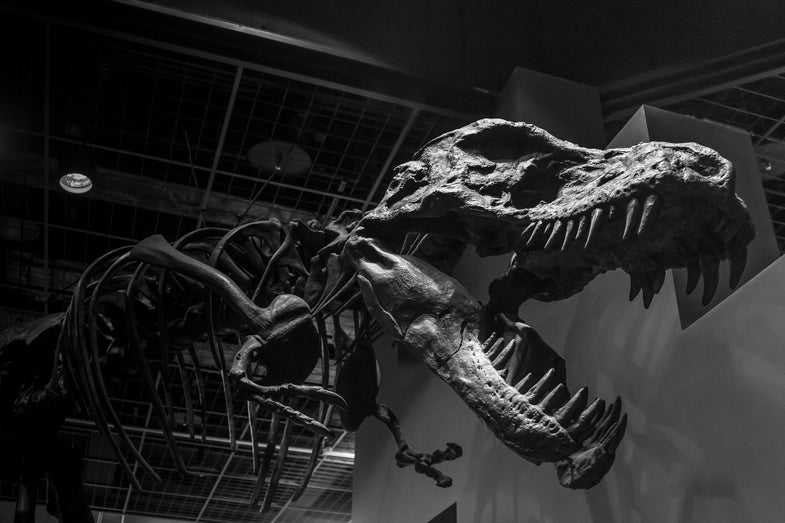 Anyone who’s watched Jurassic Park has seen the imagined horrors of what a Tyrannosaurus rex jaw can do. (Love ya, Rexy.)

But what was a T. rex jaw really capable of?

In a new study published in Scientific Reports, researchers Paul Gignac and Gregory Erickson found that Tyrannosaurus would have packed an extreme bite, using some 8,000 pounds of force to chow down on its meals.

Erickson and Gignac created a computer model to estimate the forces inside the T. rex‘s jaw based on high resolution CT scans of fossilized skulls. To those scans they then added muscles based on the dinosaur’s closest living relatives—an amalgamation of the musculature of modern alligators, crocodiles, and birds—and compared it to direct measurements of a saltwater crocodile’s bite.

Erickson, who years ago helped take measurements of the 17-foot long Australian saltwater crocodile used in the study, says that the experience was like riding a bull. Or, more aptly: “It was like wrangling with a dinosaur,” Erickson says.

A study from 2012 by biomechanist Karl Bates and colleagues found that Tyrannosaurus rex had a maximum bite force of 12,800 pounds. That’s larger than the new study, but both estimates are less than estimates of the strongest bite force for any land animal. That superlative goes to Deinosuchus, an ancient crocodile which was estimated to have a bite force of 23,000 pounds.

“It’s a nice study, it’s always good to see people applying information from extant animals to understand extinct ones like T. Rex,” Peter Falkingham, a paleontologist who worked on the 2012 study, says of the new research. “Having said that, I think that it highlights that there’s still a lot of work to do on extant animals: These authors state how difficult it was to properly characterize alligator muscles. That’s normal, but it reminds us to use caution interpreting fossils.”

Bite force, or the force exerted by the jaw, is not the only factor at play when it comes to the ferociousness of a T. rex bite. The other really big factor is how that force was applied. And in the case of T. rex, that force was concentrated at the tips of giant, sharp, serrated teeth that enhanced the power of the jaws up to a whopping 431,342 pounds per square inch (psi). That’s comparable to 1/128 the estimated pressure at the center of the Earth. Put another way, a hydraulic press used to crush cars uses about 2,000 psi.

“It’s kind of like high heels.” Erickson says. “High heels have really high pressure on the heel, and a flat doesn’t. It’s that pressure that’s going to go through hide or bone or not.”

In this case, the deadly stilettos that made up the Tyrannosaurus’ dentition were plenty strong enough to shatter bones.

Erickson has been working on the question of Tyrannosaurus’ bite forces for over 20 years now. Back in 1996, Erickson published a study that analyzed as many as 80 T. rex bite marks on a Triceratops hip bone. Strangely, the bone looked as though a massive hyena or dog had gnawed on it, crushing it to extract nutritious salts and marrow.

“It was a bit of a mystery right off the bat, because dinosaurs don’t have teeth that come together for chewing,” Erickson says. But he later found coprolites (fossilized feces) from another T. rex that had rounded, tiny pieces of bone inside, indicating that they had gone through (and been digested by) strong acids in the dinosaur’s digestive tract.

Normally, reptiles and birds (dinosaur relatives) don’t crush bones in their mouths, because they don’t have the teeth for it (they might drop bones from a height to break them open, or scratch bones in the process of eating).

Mammal teeth, on the other hand, generally meet in our mouths, allowing us to chew our food. These are called occluding teeth. Reptile teeth tend to be offset, perfect for tearing off easily-swallowed flesh or limbs, but not so great for gnawing. But it looks like T. rex had enough force behind its teeth that even without occluding chompers, it was able to splinter away chunks of even the table-like hip of a Triceratops with ease, or fracture other bones in seconds.

How the T. rex obtained its meals with those crushing jaws is another question. A Tyrannosaurus tooth found healed over in another dinosaur’s bones indicated that the king of dinosaurs tried its tiny hands at hunting, if not always successfully. There are also suggestions that T. rex was a scavenger, supplementing its hunting diet with found carcasses. No matter how the dinosaur got its food, there is evidence that once Tyrannosaurus had a meal, it made the most of every bite gnawing on the bones to get to the delicious marrow, or even decapitating its prey in an effort to get to the best parts of its dinner.

Research into how dinosaurs bite will continue, and with each study, paleontologists and biomechanics researchers hope to get a little closer to understanding how dinosaurs moved millions of years ago. But it’s a uniquely challenging problem. While 15 scientists might be able to wrangle a 17-foot-long saltwater crocodile into a position where they can get it to bite down on an instrument, they can’t do the same thing with a T. rex (as much as they might want to.)

“They’re dead! The biggest problem with that is that it’s very difficult to know how right or wrong your estimates are. We can validate with living animals, but in many cases dinosaurs are extreme beyond what’s alive today,” Falkingham says. “The more studies like this we have, the more we can whittle our way towards the reality of the situation.”