June was probably a terrible month to be a dinosaur. Here’s how we know.

Fish bones and water lilies help pin down the exact timing of when the asteroid that wiped out the dinosaurs hit Earth. 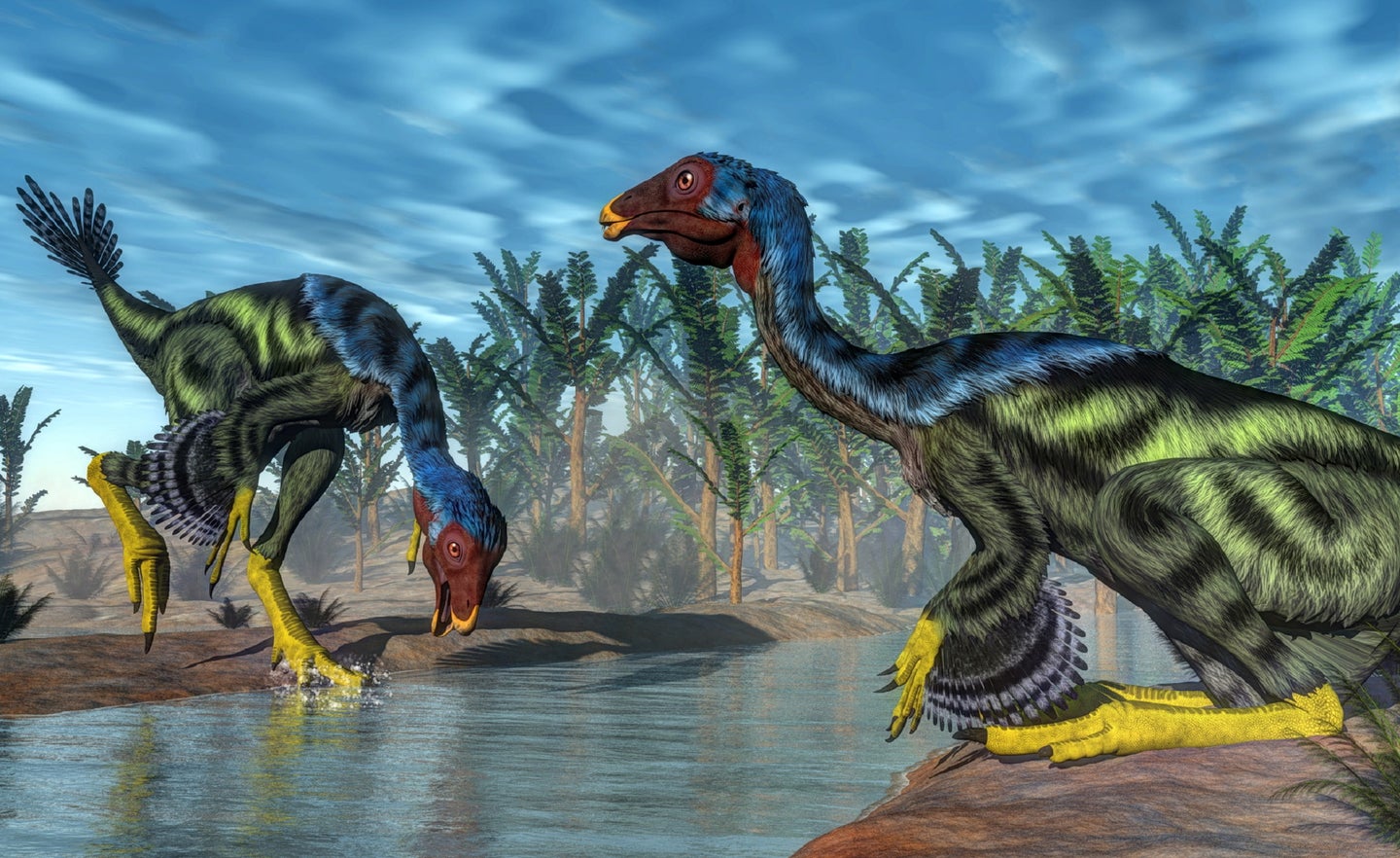 One riverbed in North Dakota sheds thousands of fossil clues on the timing and circumstances around the asteroid that caused dinosaurs (like these Caudipteryx) to go extinct. Deposit Photos
SHARE

Michael J. Benton is a professor of Paleobiology, University of Bristol. This story originally featured on The Conversation.

The dinosaurs were killed by a meteorite impact on the Earth some 66 million years ago in what has become known as the Cretaceous-Paleogene extinction event. At what time of the year this occurred has long generated debate among palaeontology enthusiasts.

A recent study published in Nature builds on earlier evidence to suggest the dinosaurs probably met their demise in June. The fact that researchers have been able to pinpoint the timing of an event that happened millions of years ago is a remarkable feat of science—but more on that later.

The latest evidence comes from a site called Tanis, located in the Hell Creek Formation in North Dakota. Tanis is one of several geological locations around the world where scientists have observed the Cretaceous-Paleogene boundary in the succession of sediments.

Tanis has yielded wonderful fossils of dinosaurs, early mammals, fish, plants and other things. Many of these fossils are exceptionally well preserved, with some showing remains of soft tissues, such as skin, as well as bones, which can offer valuable scientific insights.

The Tanis site was first identified in 2008 and has been the focus of fieldwork by palaeontologist Robert DePalma since then. In a 2019 paper, DePalma and his colleagues argued that Tanis captured the moment of the asteroid’s impact, due to three factors.

The first was the presence of dinosaur fossils occurring in the Cretaceous sediments right up to the Cretaceous-Paleogene boundary, and exactly at the boundary at the time of impact.

The second was a layer of melt spherules: tiny glass balls that cooled in flight from molten rock. When the asteroid struck Earth in the region of what is now the Yucatán Peninsula in Mexico, it spread debris and melt spherules for thousands of kilometers.

The third was evidence of seiche waves (see-saw-like standing waves) in deep channels. The Tanis site is well inland today, but at the end of the Cretaceous period it was located on the coast of the western interior seaway that divided North America at that time, with sea levels some 200 metres higher than they are today. The site was estuarine, which means fresh and salt waters were mingling.

The seiche waves were generated by the distant impact in Mexico, which set off seismic waves that shook the Earth and caused water to flow in and out of the river channels at a fast rate, estimated as beginning one hour after the impact.

As well as melt spherules within the fossil-bearing rocks, the researchers found abundant spherules in the gill skeletons of some of the fish they examined. We can imagine that as they floundered in the violently oscillating waters of the river channel, they could have swallowed melt spherules coming from above.

Looking more closely at the fish

In December 2021, DePalma and his colleagues published an important paper about the timing of the Cretaceous-Paleogene extinction event. In this study, they analysed some of the exceptionally well-preserved fish bones, looking at how the cycle of seasons, from summer to winter, were documented in the structure and chemistry of the bones.

By comparing living sturgeon to sturgeon fossils from Tanis, they found that in a fin spine, regular layering at a scale of millimeters shows the fish died when it was seven years old. The growth rings confirm the fish alternated between fresh waters in summer months and saline waters in winter. In this and other specimens analyzed in the same study, the last growth increment matches the transition from spring to summer.

Taken together, this suggests the meteorite struck in May or June, being the cusp of spring and summer in the northern hemisphere.

Importantly, these findings confirm earlier evidence based on fossil plants, which suggested the extinction event took place in early June.

Palaeobotanist Jack Wolfe identified a location in Wyoming that showed the effect of the meteorite on a freshwater lake. At the point of impact, the lake froze, preserving fossil plants in exquisite detail.

By comparing the fossil plants to similar modern water lilies Nuphar and Nelumbo, he showed that the latest Cretaceous water lilies in the lake had been halted in their growth at a point in their trajectory of producing summer leaves, flowers, and fruit which indicated freezing in early June.

Palaeontologists often say they would need a time machine to understand the details of past life, such as the month the dinosaurs died out. But here we see extraordinary conclusions can emerge from careful analysis and rational comparison with the modern day.