According to New Comprehensive Review, a Giant Meteorite Caused the Dinosaur Extinction 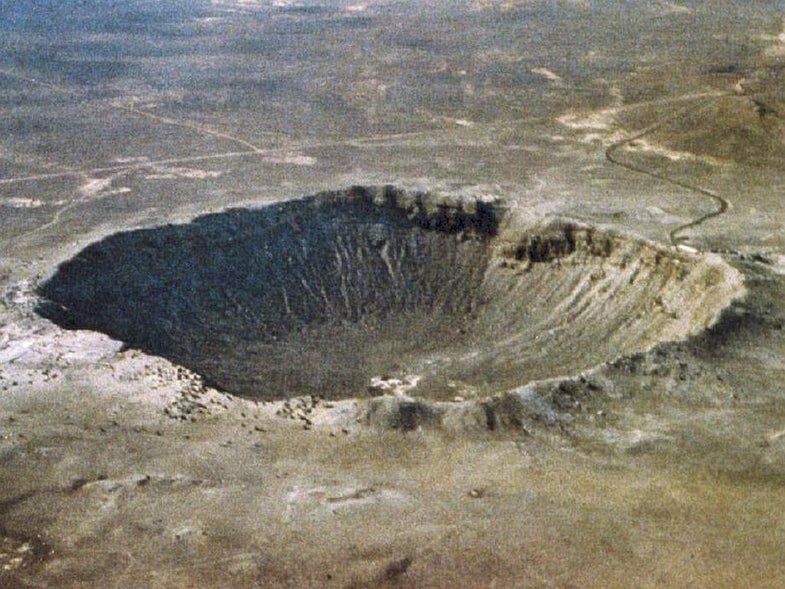 For years scientists have debated the cause of the mass extinction that killed off the dinosaurs and a slew of other species on Earth 65.5 million years ago. Now, after reviewing 20 years worth of data and research, an international team of scientists concludes that it was a a huge meteorite strike that triggered the extinction.

In the late 1970s, a geophysicist discovered an impact crater in Yucatán, Mexico, and analysis showed the crater’s date of origin to be the end of the Cretaceous. Geologic data indicate that the meteorite that produced the Chicxulub crater — which lies partially buried beneath the Yucatán Peninsula — was between 10 and 15 kilometers (6 and 10 miles) in diameter and caused an explosion on Earth that was a billion times more powerful than the Hiroshima atomic bomb.

The material that blasted into the atmosphere triggered a global winter, and researchers say much of life on Earth was gone within days.

Dr. Penny Barton, an author of the review, says “Our work lets us visualise the astonishing events of the few minutes after impact. The front of the asteroid hit the Earth while the far side was still out in the upper atmosphere, punching a hole though the Earth’s atmosphere. As the asteroid vapourised explosively, it created a crater 30 km deep and 100 km across, with sides as high as the Himalayas. However within only two minutes the sides collapsed inwards and the deepest parts of the crater rebounded upwards to leave a wide, shallow hollow.”

“These terrifying events led to darkness and a global winter, resulting in the extinction of more than 70 percent of known species. The tiny shrew-like mammals which were around at that time proved better adapted to survival than the cumbersome dinosaurs, and the removal of these dominant animals paved the way for the radiation of the mammals and eventual emergence of humans on Earth.”

During the Cretaceous, the period in geologic time that covers from about 145 million to 65 million years ago, the oceans were populated by marine reptiles and other species, and dinosaurs dominated the land. But at the end of this period, a mass extinction occurred — which wiped out more than half the existing species on Earth, including the dinosaurs. Scientists refer to this point in the geologic record as the Cretaceous-Paleogene (K/Pg) boundary.

Elisabetta Pierazzo of the Planetary Science Institute and David Crawford of Sandia National Laboratory were the first researchers to create 3-D simulations of the Chicxulub event. Their models showed that the impact’s effects on Earth’s climate were even more dramatic than previously thought. Although marine and land ecosystems show only minor changes during the 500,000 years prior to the K/Pg boundary, the abrupt decrease in species diversity occurs precisely at the time of the boundary.

Not all scientists support the Chicxulub hypothesis — some have attributed the climate change and mass extinction to global cooling and acid rain that occurred on Earth as a result of volcanic activity on the Indian subcontinent. But Pierazzo says the sulfur oxides that were ejected into the atmosphere during the volcanic eruptions were distributed over several hundred thousand years, whereas the major biological changes at the end of the Cretaceous era appear to have happened abruptly and at the exact time that the Chicxulub hit.

A paper on the study appears in the March 4 issue of the journal Science.