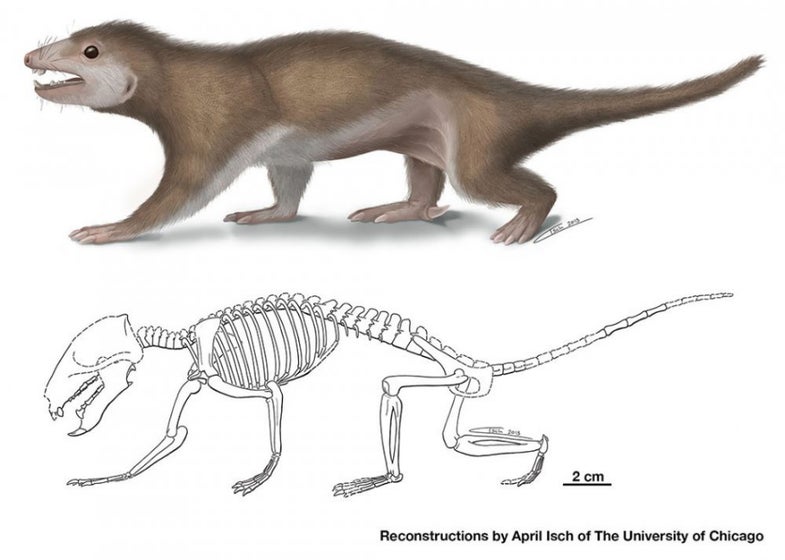 Meet Megaconus mammaliaformis, a 165-million-year-old proto-mammal recently discovered in Inner Mongolia, China. This squirrel-sized dude evolved long before the rise of modern mammals, but the hair and fur residue found preserved in its fossil indicate that those traits existed even back in the Jurassic era.

Hair and fur have generally been considered unique to mammals, so it’s exciting to find that they could have been around even before the first mammals arrived on the evolutionary scene. This bolsters the 2006 finding of one other pre-mammalian fossil with fur, the only other hairy ancestor we’ve discovered.

Megaconus probably ambled around with a gait similar to a modern rock hyrax or an armadillo, and had teeth similar to modern rodents. On its heels, it had a long, perhaps poisonous spur, like male platypuses do now.

“Megaconus confirms that many modern mammalian biological functions related to skin and integument had already evolved before the rise of modern mammals,” says Zhe-Xi Luo, one of the fossil’s discoverers and a professor of organismal biology and anatomy at the University of Chicago.

Some of its other features, though, differentiate it from today’s mammals. A middle ear still attached to the jaw is more reminiscent of reptiles, and the structures of its anklebones and vertebrae look very similar to other mammal-like reptiles.

“We cannot say that Megaconus is our direct ancestor, but it certainly looks like a great-great-grand uncle 165 million years removed,” Luo says.

The paper detailing the discovery can be found in Nature.