Five things we should remember from this season's destruction. 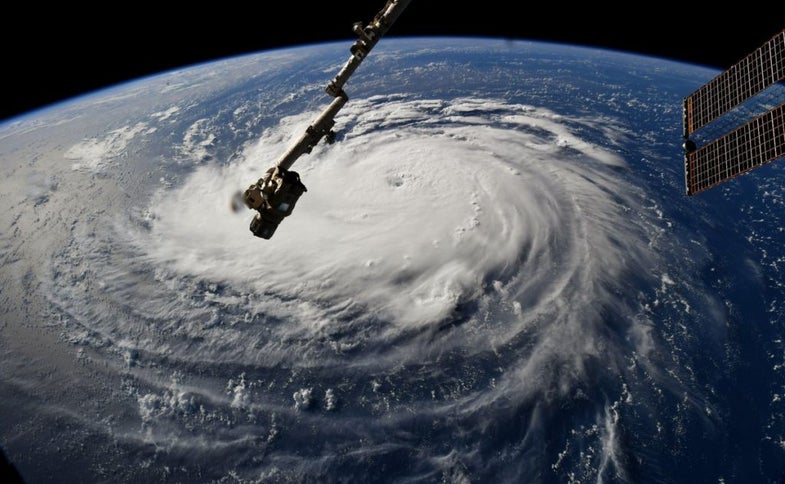 Hurricane Florence as seen from the ISS on September 10, 2018. NASA
SHARE

Too often, the public forgets a harrowing hurricane season until the next is rattling our shutters. We learned quite a few lessons during the 2018 Atlantic hurricane season, and hopefully, we can use this year as a guide to get ready for storms in the future.

It really only takes one

Weather forecasts usually fall back on memorable clichés to drive home a point. “Turn around, don’t drown” is probably the most famous—meteorologists use it almost reflexively when flooding is in the forecast. Another is “it only takes one,” and we sure learned that this year.

The 2018 Atlantic hurricane season saw 15 named storms—the average is 12—but can you name more than Hurricanes Florence and Michael? This was a year that consisted of quick, relatively weak storms forming out at sea, where nobody but sailors and weather observers paid them any mind.

However, Florence and Michael slipped through the cracks to become two of the worst storms to hit the United States in modern history. Florence generated historic flooding in the Carolinas while Michael hit land as one of the strongest storms to make landfall in the U.S. since modern recordkeeping began.

Just about every seasonal hurricane forecast ends with the warning that it only takes one storm to break through even in an otherwise-underwhelming hurricane season. 2018 sure drove that point home.

One of the biggest lessons we learn in grade school is that history repeats itself. The same is usually true for meteorology. You can get a decent idea of what’s going to happen based on what’s happened before. If a hurricane tracks across a certain part of the ocean during a certain time of the year, you can use past hurricane tracks to get a rough idea of where the storm will wind up.

But storms can surprise us. Hurricane Florence defied climatology and followed an odd track during its two-week journey from western Africa to the United States. No storm that followed Florence’s initial track had ever reached North America before. I referenced that climatological tidbit in my first mention of Florence in a post here on August 30: Storms on a track toward the middle of the Atlantic typically don’t affect the United States, but it’s far enough out that it’s worth close monitoring. Florence wound up following an incredibly unusual track through the central Atlantic straight toward the United States. History is a good guide, but it doesn’t always apply.

We have to downplay the Saffir-Simpson Scale

We’ll probably never be able to get rid of the Saffir-Simpson Hurricane Wind Scale, the scale that allows us to rate the potential extent of damage based on a hurricane’s maximum sustained winds. The scale is so deeply ingrained in Americans’ knowledge of weather forecasts that completely scrapping the scale would only open the door to confusion and misinformation.

But while the scale is good for describing winds, the threat of freshwater flooding from heavy rain sometimes matters more. The Saffir-Simpson Scale just can’t convey the hazard posed by water.

Our best bet to deal with this issue is to downplay a storm’s category on the scale and reinforce all of the hazards of a storm, not just the wind. Meteorologists and news organizations did a pretty good job of this in the lead-up to Florence. But despite that improvement, some residents in soon-to-be-flooded communities remained fixated on the storm “only” reaching land as a category one hurricane. That’s something we’ll have to continue working on in the future.

Inland communities are also at risk

One of the most frustrating parts of hurricane forecasting is that maps produced by the National Hurricane Center (and most news agencies) only highlight watches and warnings for the coast, leading to the appearance that the greatest hazards will be confined to oceanside communities.

Hurricane Florence’s rains were a tremendous disaster for towns far inland from in North Carolina and South Carolina. Hurricane Michael’s winds left some towns without power for almost a week more than 500 miles inland from the point of landfall along the Florida Panhandle. I detailed in October how residents in my part of central North Carolina overprepared for Florence but ignored Michael until the latter storm’s 70 MPH winds heavily damaged our county’s electrical grid.

Inland communities need to do a much better job preparing for landfalling storms. Likewise, meteorologists need to do a better job communicating risk to residents far from the coast. The strong winds and heavy rains of a storm don’t stop at the beach.

Humans hate uncertainty. We want to know what’s going to happen, and we want to know now. Meteorologists have to predict the future of something we can’t control. This leads to uncertainty in weather forecasts, even though technology has improved by leaps and bounds. And the stakes of a busted hurricane forecast are much greater than a blown temperature forecast on any given morning.

Communicating and understanding this uncertainty is something meteorologists and consumers both need to work on in future hurricane seasons. The cone of uncertainty is essentially the margin of error drawn out on the map; however, our eyes are drawn right to the center of those forecast maps. The effects of a storm can extend hundreds of miles from the eye and yet many of us only care about where the eye makes landfall.

We need to recognize the uncertainties that exist in both hurricane track and hurricane intensity forecasts. It’s not always going to be perfect. Meteorologists do the best they can with the information they’ve got. Sometimes they’re wrong. Many times, they simply don’t know yet, but forecasters are forced to talk about a storm definitively—because people view the phrase “I don’t know” as an admission of ignorance or weakness.

No matter what the forecast says, it’s wise to recognize that weather is never certain. It’s good to prepare for a storm even if it looks like it’s veering away from you or it looks like it’ll be weak when it hits land. Storms can suddenly change course or rapidly intensify. Accounting for uncertainty is a critical step in any level of storm preparedness. Once you’re prepared for the unexpected, you’ll probably come out the other end of the storm just fine.