Humans have always seen themselves as distinct from other creatures. Science is forcing us to reconsider that position. 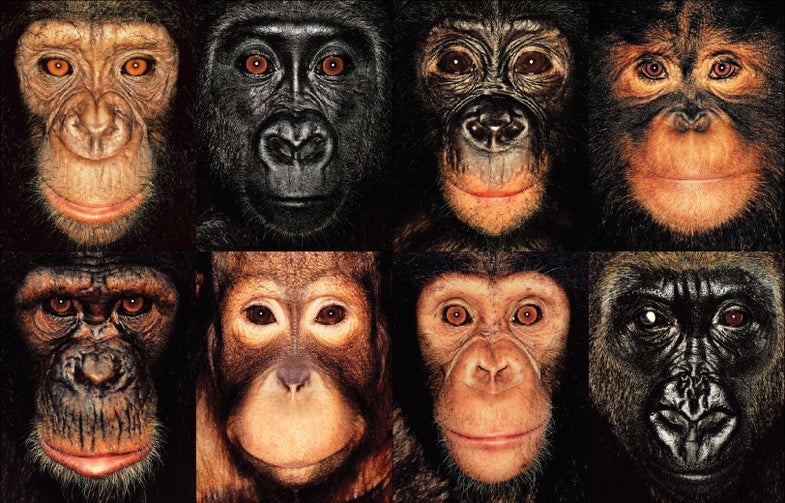 In December 2013, four captive chimpanzees in the state of New York became the first nonhuman primates in history to sue their human captors in an attempt to gain their freedom. The chimps’ lawyers, members of a recently formed organization known as the Nonhuman Rights Project (NhRP), were asking a judge to grant their clients the basic right to not be imprisoned illegally. The NhRP could soon file similar lawsuits on behalf of other great apes (bonobos, orangutans, and gorillas) and elephants—beings that have all been shown to possess highly developed cognitive capabilities.

The NhRP’s campaign is, not surprisingly, controversial. For many, the very idea of nonhuman personhood is an oxymoron. Others argue that human rights come with societal responsibilities, such as paying taxes and obeying laws, that no nonhuman could ever meet. Still others feel that current animal-protection statutes offer sufficient security without all the legal and philosophical headaches inherent in extending human rights to another species. The judges of the New York lawsuits ultimately dismissed them all on the grounds that the plaintiffs aren’t people. The appeals are ongoing.

Still, the simpler and more profound truth about the NhRP’s arguments is that as recently as 10 years ago, they would have been laughed out of any courtroom, derided for being shamelessly anthropomorphic. But now an ever-expanding body of observational, neurological, and genetic evidence about animal intelligence and behavior is forcing us to reconsider the age-old boundary between ourselves and other creatures.

The question of where we stand in relation to animals has preoccupied humans since the dawn of consciousness. The earliest tales told across cultures, among them the creation myths of the Nuer tribesmen of Sudan and the Old Testament’s story of Adam and Eve, all pivot around the sudden severance of a perceived unity between ourselves and other creatures. And the resulting sense of separation has kept us from viewing animals as anything but lesser versions of ourselves.

11: The number of brain regions found to correspond between humans and macaques (out of 12 total).

Early Western thinkers such as Aristotle—composer of one of the first guides to the animal kingdom—wrote of a “chain of being” in which animals, because they lacked reason, were naturally ranked below us. In medieval times, animals became largely abstracted into allegory. The great apes were depicted as “wild men of the woods,” chasers and rapists of women, and thus the very embodiment of our baser, primal selves. In the ecclesiastical courts of the Middle Ages, meanwhile, animals such as pigs, which roamed freely in villages where they often maimed or killed unattended children, were given full trials and even assigned their own lawyers. The guilty party would then be dressed in human clothing and publicly tortured and put to death in the town square: a symbolic ritual meant to reestablish humankind’s dominance over animals and restore some semblance of order to an otherwise disorderly world.

A more objective view of animals began to emerge during the Renaissance, but it wasn’t until the late 19th century that the first truly scientific study of animals appeared, authored by none other than Charles Darwin. Although he is known almost exclusively for his theory of evolution, Darwin devoted the better part of his life after the publication of The Origin of Species to researching and writing The Expression of the Emotions in Man and Animals. Published in 1872 (the same year as the first issue of Popular Science), the book paved the way for a series of scientific works on animal sentience and emotion. In the absence of modern research techniques, they were, to say the least, often highly speculative. In one book, the author accords dogs the awareness of “indefinite morality” and asserts that reason begins with crustacea. But these manuscripts also laid the groundwork for the field of comparative psychology, the study of animal behavior. For nearly a century, comparative psychologists developed an intuitive understanding of the shared biological and behavioral bonds between species. Now science is confirming those suspicions in remarkable ways.

Some years ago, I found myself standing inside a large walk-in cooler filled with different animal brains, all of them the property of Patrick Hof, a neuroscientist at the Ichan School of Medicine at Mount Sinai in New York City. There, adrift in glass containers of formaldehyde was a constellation of cerebrums: human, chimpanzee, gorilla, orangutan, spider monkey, bison, and bat. On shelves in the back, Hof kept seaborne brains: dolphin, porpoise, orca, and beluga. Beneath them, a sperm-whale brain rested at the base of a Rubbermaid garbage pail. A gooey white disk, it was roughly the size of a café table.

Hof studies all the brains he can get his hands on in order to better understand the organ’s evolution. Along the way he has discovered numerous common features, not just within the human brain and those of our fellow primates, but also in a number of other mammalian species that the NhRP could soon be representing in court.

Not long ago, the different brains in Hof’s cooler were as disparate and inscrutable on a cellular level to scientists as the stars were to early humans. Now there isn’t a brain they can look at without considering the common neuronal matter shared by all mammals. Advanced neuroimaging and tissue analyses of the brains of cetaceans, for example, have revealed a very different cerebral construction than our own (owing to the vastly different environments in which the two brains evolved), and yet they exhibit similarly complex cortices and limbic systems. Those areas in human brains are the very ones involved in emotion processing, thinking and perceiving, and language. Hof has also found in both cetacean and elephant brains the presence of highly specialized neurons known as spindle cells. Once believed to appear only in humans, spindle cells are possibly associated with self-awareness, empathy, and a sense of compassion­­—the kinds of functions long believed to be exclusively our own.

Within the 106-page memorandum filed by the NhRP on behalf of its first nonhuman plaintiffs, nine leading primatologists filed affidavits testifying to the cognitive capacities of chimps, our nearest biological relative. “These include,” the memo states, “their possession of an autobiographical self, episodic memory, self determination, self-consciousness . . . empathy, a working memory . . . their ability to understand cause and effect and the experiences of others, to imagine, to innovate and to make tools. . . . Like humans, chimpanzees have a concept of their personal past and future . . . they suffer the pain of anticipating never-ending confinement.”

The memo also includes an observational study of a chimpanzee in a Swedish zoo who regularly hides an arsenal of stones within his enclosure—ammunition that he uses to throw at zoo visitors whenever the mood strikes him. Other studies show that chimps consistently outperform humans in computer-symbol recognition tests. Comparative genomic analyses, meanwhile, prove chimps share nearly 99 percent of our DNA. Human and chimp blood is interchangeable, allowing for transfusions in either direction as long as blood types match. And a number of brain studies now indicate, among other common characteristics, an abundance of spindle cells, more than in any other species of great ape besides human.

Shared brain structures and complex behaviors may come as little surprise with regard to other primates. But finding them in creatures so seemingly different from ourselves is revelatory. Elephants and whales, for example, the giants of their respective domains, not only have comparably large and complex brains relative to our own; they also evolved them millions of years before humans came along. Both live in multitiered, largely matriarchal societies in which extended groups of mothers, daughters, aunts, and friendly “allomothers” rear and educate their young. They have their own sophisticated languages and songs and, in the case of certain cetacean species like the sperm whale, separate dialects specific to different clans. Both species use tools and foraging techniques and pass that knowledge to other generations, and both grieve their dead—all characteristics of another phenomenon we have long exclusively reserved for ourselves: culture.

It only follows, then, that these creatures also suffer, as we do, from their culture’s collapse. Elephants that have witnessed the slaughter of their parents by poaching or culling and lost the support of their extended family group exhibit the same erratic and often detached behaviors as African war orphans who’ve suffered the loss of their families and the destruction of their villages. Post-traumatic stress disorder, in other words, cuts across species.

Hippocampus: A brain region associated with memory and emotion processing. On a percentage basis, African elephants have the biggest hippocampus of any animal, even larger than humans’.

Over the entire arc of human thought on animals, the persistent question has been whether they are really like us—whether they are people too. Even as comparative psychology advanced our understanding of animals, we studied them, in no small part, to better understand ourselves. For many decades, our regard for nonhuman creatures went no further than the B.F. Skinner–inspired behaviorist prohibition of anthropomorphism: We can’t conjecture about what’s happening in their minds for the simple reason that we can’t conjecture that about one another.

The most recent science, however, has freed us from that perspective. It no longer matters whether we can truly know what a chimp’s day is like, or an elephant’s, or a whale’s. All the available evidence proves that they have rich days of their own and minds enough to lose. Especially for those creatures currently on the NhRP’s prospective clients list, it isn’t their likeness to us but their remarkably parallel complexity that must give us pause and command a new regard—certainly a philosophical one and perhaps a legal one as well.

Few cases better reveal the power of science than those put forth by the NhRP on behalf of nonhumans. New instruments and techniques are overturning our understanding of the universe and our place in it. In a sense, we’re discovering that the search for complex beings like ourselves has been forever pointed in the wrong direction. Rather than seeking answers in a distant star system, we can find them in billions of years’ worth of evolutionary biology. As for the intelligent aliens we’ve so longed to meet—they have been right here beside us all along.

This article was originally published in the January 2015 issue of Popular Science, under the title “Animals Like Us”. 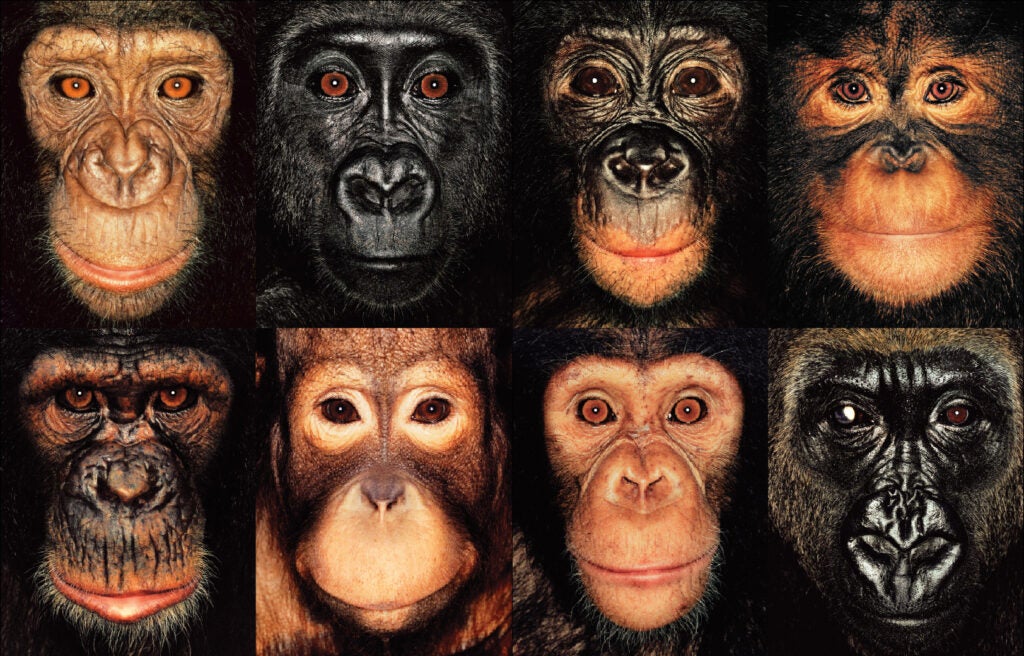