They speak the Queen’s English, so to speak. 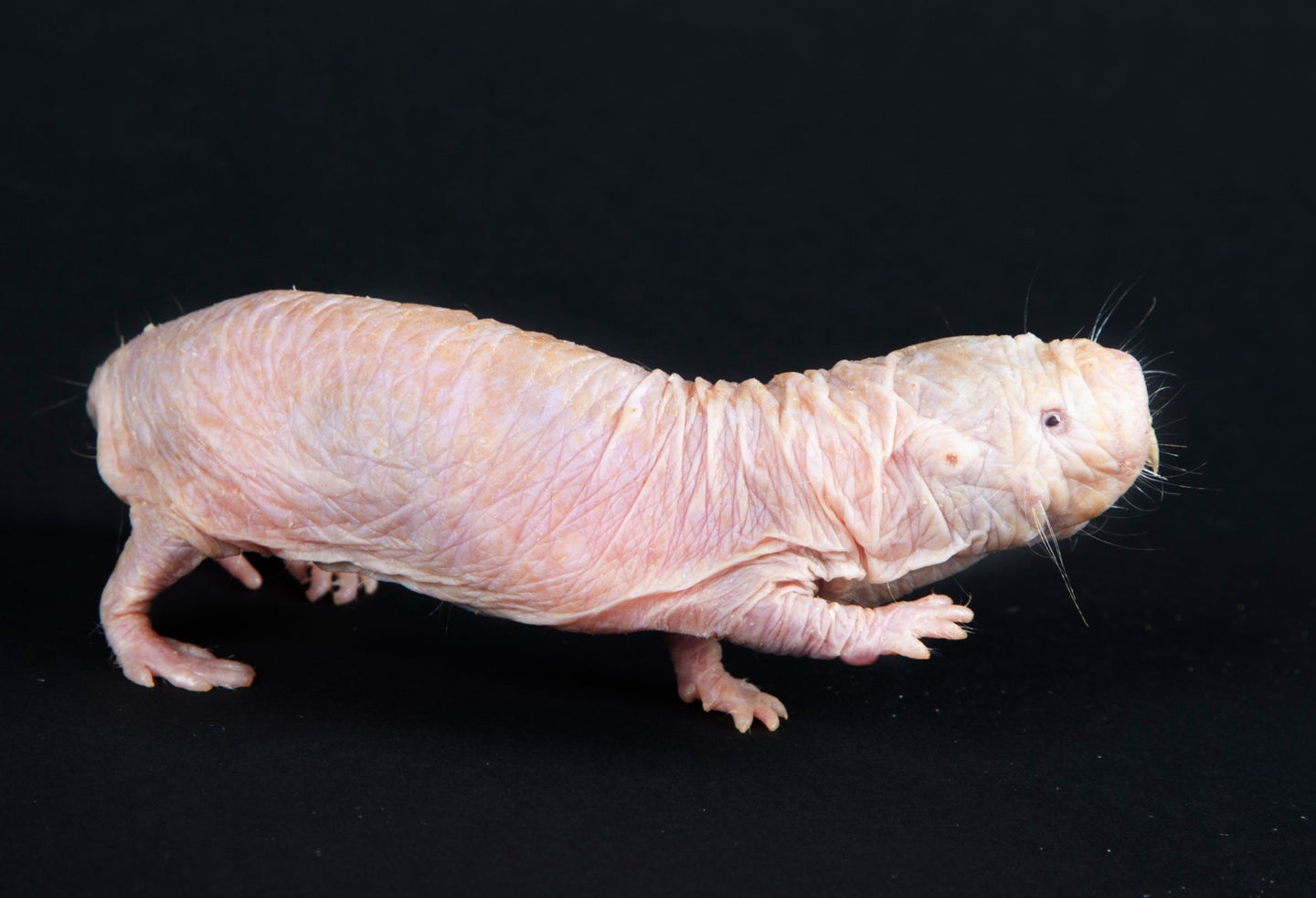 If you want to see an elaborate animal society in action, look no further than the naked mole-rat. These pale wrinkly little rodents, indigenous to East Africa, live in underground colonies with rigid roles and elaborate social hierarchies under the stewardship of a queen. And each colony, researchers think, has its own accent.

“We think that this vocal cue is maybe one way in which they can recognize who’s going to have access to the limited supply…and who might be trying to invade,” says Alison Barker, a neuroscientist at the Max Delbrück Center for Molecular Medicine in Berlin, Germany.

Barker and her colleagues found that each separate colony of naked mole-rats has its own unique “dialect.” They believe it could explain how mole-rat colonies are able to organize and sustain themselves. That would put mole-rats on the ever-expanding list of animals known to have such dialects, a list once limited to songbirds and cetaceans. But their research also shows that mole-rats’ dialects operate in their own ways—ways that are alien to any human dialect.

Mole-rats make at least twenty known sounds, but the researchers focused on the most common one: a “soft chirp.” They analyzed the soft chirps of mole-rats in captivity, both in Berlin and half a world away, at the University of Pretoria in South Africa. Each colony turned out to have its own unique vocal signature, much like the denizens of a human city might have a peculiar manner of speaking.

Importantly, these findings suggest that the mole-rats’ chirps aren’t fixed by genetics. The differences between mole-rats’ vocal signatures are instead a learned part of their social structure. The researchers even found that, like humans, orphaned mole-rats took on the dialect of their adoptive colony.

“If I was born in Scotland, then as a baby went to Wales, I would probably grow up speaking with a Welsh accent, not a Scottish accent,” says Gary Lewin, a researcher at the Max Delbrück Center who was also involved in the study. “In exactly the same way, the mole-rats would grow up with their new dialect around them.”

“The fact that these mole-rats are doing this is very interesting,” says Robert Seyfarth, a researcher at the University of Pennsylvania who has spent decades studying communication in primates. “That’s relatively rare among mammals.”

Just how many other animals can do this is an open question. Songbirds, for instance, learn their calls in developmental stages. Primates, on the other hand, are generally thought to be born with their entire library of vocal calls intact, though there’s evidence they can change them later.

[Related: 9 jaw-dropping facts about naked mole rats to celebrate the bloody ascent of their new queen]

The young mole-rats had to be introduced as pups, since colonies will violently attack outsiders. Biologists think this may arise from the scarcity of food in the mole-rats’ arid habitats in Ethiopia, Somalia, and Kenya. Their dialects may help them know who’s in their colony, allowing them to keep their food within their own kind.

But the word “dialect” here can hide an important distinction. When you think of dialects, you might imagine differences in vocabulary: a Briton might call a particular purple food an aubergine, while an Australian might call it an eggplant and a South Asian might call it a brinjal. Or, perhaps, you think of something like Arabic, with a rainbow of varieties that verge on being different languages entirely.

What scientists are hearing in mole-rats isn’t really either of these. Instead, it’s more like an accent. “Imagine a Bostonian saying ‘park the car in Harvard Yard’ versus someone from Alabama,” says Dan Weiss, a professor of psychology and linguistics at Penn State University. “In humans, this can be a clear cue as to where one is from.”

That’s not the only difference between human language and how mole-rats communicate. The colony’s queen, the only female in the colony who can reproduce, also drives her subjects’ dialects. The researchers noticed that one colony’s chirps began to vary in the interregnum after their queen died, only to fall in line with a new monarch’s dialect when she took the throne.

That has no obvious human equivalent. “We can certainly talk about the Queen’s English, for example,” says Weiss, “but it is not something that is directly copied from the Queen nor would it go away in the unfortunate event something were to happen to the Queen.”

The fact that mole-rat communication is fundamentally different from human speech could reflect an important distinction between Homo sapiens and other animals: human language is so crucially tied to culture, and not all scientists are convinced that this carries over at all into the animal world.

Whale-song, for instance, is often held up as an example of animals learning how to communicate from each other. But some researchers say there might be a yet-unidentified mechanism driving how whales alter their song. For instance, they’ve observed groups of humpback whales on opposite sides of the world, which have no contact with each other, change their songs in similar patterns.

If there’s similarly something else at play in mole-rats, biologists are especially interested because knowing what those mechanisms are could help them understand how features of language evolved. This latest research is still barely scratching the surface of how these creatures are able to keep up their elaborate social hierarchy.

“Given the specificity of the social system of naked mole-rats, it is exciting to have this kind of questions investigated in this species, with such brilliant results,” says Hélène Bouchet, a primate communication researcher at the University of Rennes 1 in France.

“Mole-rats have this incredible society,” Seyfarth says. “It looks like their vocal communication, and the way their brain organizes vocalizations, has evolved to fit the demands of that society.”

It’s mole-rats social nature that Barker wants to highlight. “I know this is getting a lot of press about naked mole-rats being xenophobic, but one of the reasons I like them is actually because they’re so cooperative,” she says.

She wants to investigate if mole-rat colonies in captivity might call differently than their counterparts in the wild. Once the pandemic lets up, she thinks researchers like her could take microphones into the field and record mole-rat chirps in their natural habitats in East Africa. “I think that we’re going to find, in the future, that their vocal repertoire really helps them collaborate and cooperate in many ways.”